NASCAR driver Parker Kligerman is no stranger to speed and powerful vehicles. But sometimes leaving the track brings a little extra thrill. Kligerman and Kyle Busch Motorsports plunged into the rally racing world to transform the 2013 Camry SE into the "CamRally" for the Toyota Dream Build Challenge. The exterior of the Camry turns heads with the vintage Toyota Racing color combination of red, orange and yellow. Working with Mooresville, N.C. shop Detroit Speed, Inc., the rest of the modifications create a real, road-ready rally car. Racing seats, turbos, racing windows, a roll cage, powerful brakes and heat protection add functionality and safety to the car for rough terrain. Fog lights and an aerodynamic package enhance the ability of the car when it hits the road.

There's also a special CamRally logo with Kligerman's racing number 77. "This Camry may look like a work of art, but we put some real muscle and functionality throughout the entire vehicle," Kligerman said. "In rally racing, we're not just protecting against a wall, but from trees too. Detroit Speed did an amazing job and after working with them I can see why they are the defending champs. With the help of their many partners, they were able to put all the bells and whistles on this car and they left just enough room in the trunk for us to bring the trophy from the Toyota Dream Build Challenge back to Kyle Busch Motorsports for the second straight year." 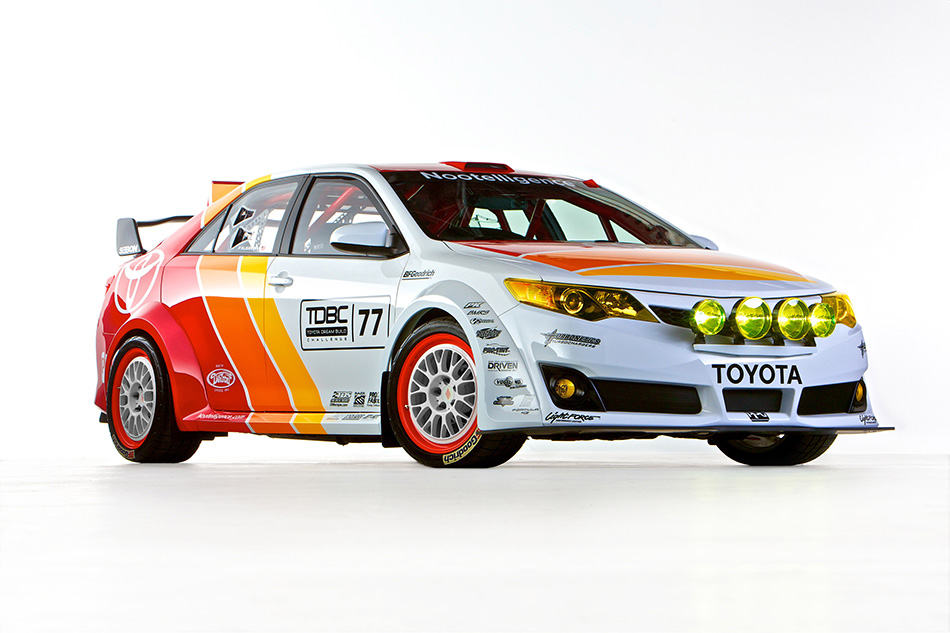 Kligerman is one of stock car racings' most promising young drivers, having burst into the top levels of NASCAR with no previous racing family ties. Last year included his first career NASCAR victory at Talladega (Ala.) Superspeedway, two pole awards and a fifth place finish in the final NASCAR Camping World Truck Series driver's point standings.

The Toyota Dream Build Challenge gave five Team Toyota athletes and their big-name partners seven weeks to create the ultimate vehicles of their choice. Fans will select the victor by voting once per day at www.ToyotaDreamBuild.com until Nov. 4. Top Gear host and racing personality Rutledge Wood will announce the winner at the SEMA Show in Las Vegas on Nov. 5 at 10 a.m. local time. Fans will be able to tune in live to watch the entire press conference at www.livestream.com/Toyota and see the winner announced in real time.

The other three competitors are freestyle skier Simon Dumont with partner Oakley who created a 4Runner ready for snowy mountains; BMX rider Drew Bezanson with partner Skullcandy and a music-themed Corolla; and supercross stars Justin Brayton and Josh Grant with partner Joe Gibbs Racing Motocross with the ultimate Tundra for their sport.