The Golf, the most successful German car of all time, reaches its fifth model generation in the autumn of 2003. Its design and technical features are more supreme, more dynamic than ever before. The new model will be recognised immediately as the latest version of a truly original concept, the 'Golf class'. The styling, with its characteristic C-post, powerfully shaped rear end, emphatically sporting nose and muscular, wedge-shaped outline, communicates a new, supremely dynamic personality.

Ever since a model bearing this name was first introduced almost thirty years ago, the Golf has been as unique as a one's own fingerprint. One of the secrets of its worldwide success (more than 22 million Golfs have so far been sold) is that Volkswagen, when it produced a direct successor to the Beetle, created an 'original' that resists imitation. For four generations now, the design has been perfected and updated, but it has always represented a stylistic image of its time. The fifth Golf model that is about to be launched retains this unique character but is also the biggest step forward so far in the evolution of this model, both visually and technically. The design team has given the new Golf a even more sharply focused dynamic character that also sets new emotive accents. 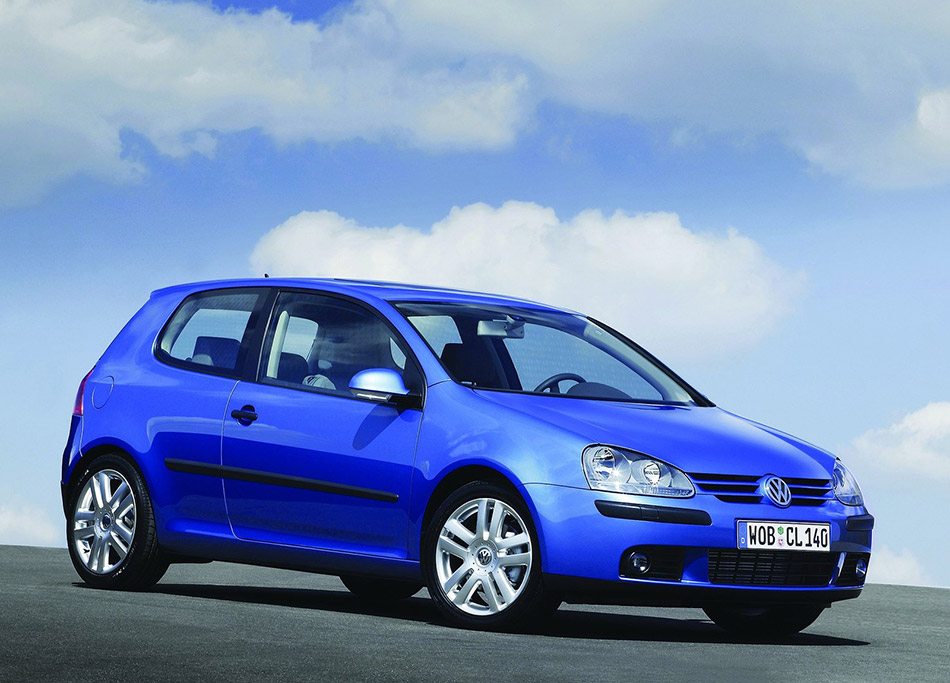 The front-end styling is new in every detail, and optimised for low aerodynamic drag. Another unmistakable feature are the twin circular headlights with the glass tapering toward the centre of the car and with horizontal flashing turn indicators in "Phaeton" style. Above the headlights, the side panels now rise more in a more pronounced curve than before and as part of the opening section of the engine hood, create a slightly V-shaped outline together with the radiator grille, that emphasises the dynamic character of this new Volkswagen even more.

The rear of the body is styled in an equally powerful manner: the rear body shoulders emphasise the Golf's strong visual presence, the bold rear lights with their twin circular elements are another immediately recognisable feature of current Volkswagen design. Half of each rear light cluster is incorporated into the tailgate, which is neatly laid out, with a large rear window that ensures a good view to the rear and, together with the side windows extending back as far as the C-post, for visual lightness and elegance. The overall effect is an emotive one that makes the new Golf seem even more agile and dynamic than any of the previous model generations.

Equipment and decor - perfection down to the smallest detail

This dynamic image is possessed by every version of the new Golf, which as a high-volume model will debut with two- or four-door body styles and be available with Trendline, Comfortline or Sportline decor. Common to all these versions is a very full luxury and safety specification including six airbags, five head restraints (of active pattern for the front seats), lap-and-shoulder seat belts, a new type of safety steering column and a pedal assembly that yields to minimise the risk of injury in the event of a crash. 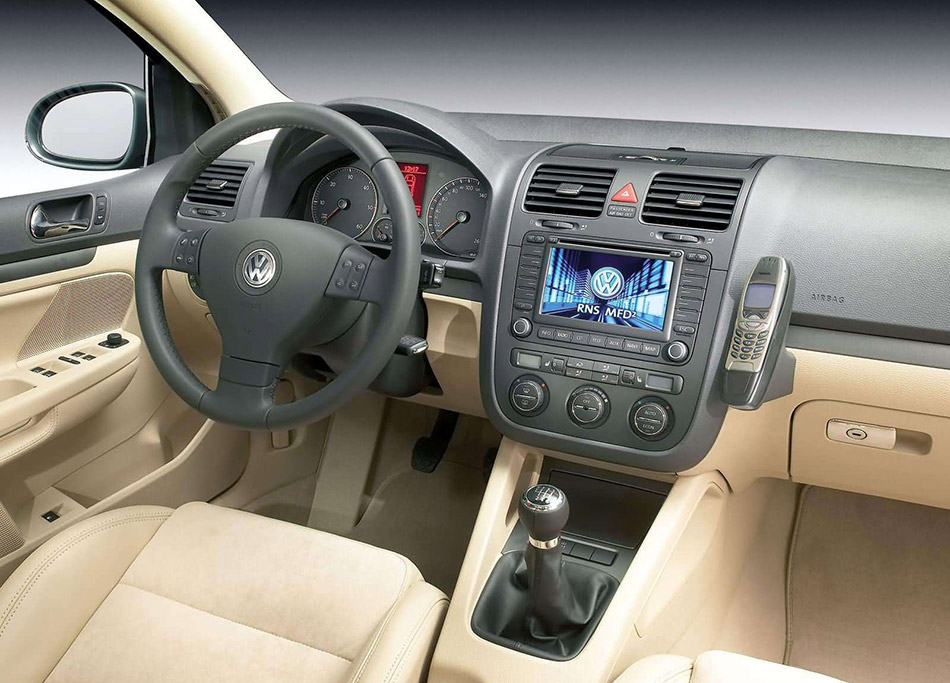 Every detail of the design has been perfectly solved: the controls for instance, are easily understood and ergonomically correct in their positioning; all functional levels have been kept separate to avoid confusion, and the switches and pushbuttons can be operated intuitively. An example of this is the optional Climatronic automatic air conditioning, which has separate controls for the driver and front passenger: if the car is reversed, it switches to the recirculated-air mode. If the windscreen washer is operated, the intelligent control system interrupts the fresh-air supply immediately. The seats are another good example: they are of entirely new design, for maximum occupant comfort, and Volkswagen is also the first manufacturer to offer a car in this market segment with the option of four-way electric lumbar support (integrated into the electrically adjustable seat) and also an independent heater for use when the car is at a standstill. In addition to the 60 : 40 split rear seat backs, which can be folded down as a standard feature, an optional front passenger's seat back that folds forward can also be obtained for maximum load-carrying capacity.

The body - a new value standard

The body itself is wider than before (1,759 mm / + 24 mm) and also higher (1,483 mm / + 39 mm) and longer (4,204 mm / + 57 mm); it therefore provided distinctly more interior space, particularly in the rear-seat area (+ 65 mm legroom, + 24 mm headroom at the rear and + 8 mm at the front. The luggage compartment now holds 347 litres and the interior length has gone up by 54 mm. These gains move the Golf nearer to the next-higher passenger-car category, but in doing so also serve to emphasise its classless character. This is even more true of the standard of quality it achieves, which is unique in this market segment. The bodyshell's static rigidity value is an impressive 80 % (!) higher and thus superior to any of the new Golf's competitors.

Volkswagen has given the Golf's new, dynamic safety suspension settings that are at the same time sporty and comfortable. At the front, the spring strut suspension layout has been optimised in many areas, to ensure accurate directional guidance and stability. At the rear, a new multi-link suspension layout has been developed. The handling and ride quality have been perfected by a completely new and highly innovative form of electro-mechanical power steering, which not only provides a degree of power assistance that matches the car's road speed, but also makes a big contribution to straight-line precision. Standard features on the new Golf are the latest ESP electronic stabilisation programme and a Brake Assist device, to guarantee maximum stability and retention of the chosen line when cornering and braking. The brake system, with optimised cooling, forms a reliable basis for excellent stopping distances. In the sum of all these positive features, the Golf's chassis and suspension represents an unparalleled blend of ride comfort to a standard normally only associated with a much larger car, excellent steering response and road behaviour.

The power train also provides ample evidence of Volkswagen's technological leadership. The keyword here is direct fuel injection. Taking the TDI diesel engines as an example, the supreme new power unit in this area is the 2.0 TDI, which develops 103 kW (140 PS). It is a high-torque four-cylinder unit with four valves per cylinder, driving the wheels through a new six-speed gearbox or with the option of the direct-shift gearbox (also with six speeds). Volkswagen was the first manufacturer worldwide to introduce this type of gearbox, in its Golf R32 DSG model. Then there are the FSI engines: this abbreviation is used for the units with direct petrol injection. The 1.6 FSI, rated at 85 kW (115 PS), has already proved successful in the Touran and is now to be available in the Golf. Here too, a six-speed gearbox is standard equipment, but the driver can, as an optional extra, leave the gear changes to a smooth, efficient six-sped automatic transmission. The new Golf will be launched with a choice of four power units - two petrol engines (55 kW / 75 PS and the 1.6 FSI with an output of 85 kW (115 PS), and two TDI diesels (77 kW / 105 PS or 103 kW / 140 PS). All Golf engines comply with the EU 4 exhaust emission standard. Four further engines will be launched slightly later, including two FSI units and an SDI diesel. In due course, additional engine options at the top end of the power-output scale will also become available. Delivery of cars with the automatic transmission and DSG options will start early in 2004.