The countdown for the Tiguan has begun: Volkswagen will bring the "small Touareg" to market at the end of next year – a SUV, a highly variable companion for use on all routes, terrains and in all situations. Some initial signs of just how this Volkswagen – with all-wheel drive in most versions – might appear were offered in early 2006 with the Concept A presented in Berlin. Front grille, headlamps, engine hood, front fenders and wheel arches gave flashing glimpses of the Tiguan and showed where the journey is headed. Now this journey will be continued in Los Angeles: That is because with the exceptionally early world premiere of the Concept Tiguan at the LA Auto Show Volkswagen is now offering another preview of the sport utility vehicle that will arrive at its first customers within twelve months. 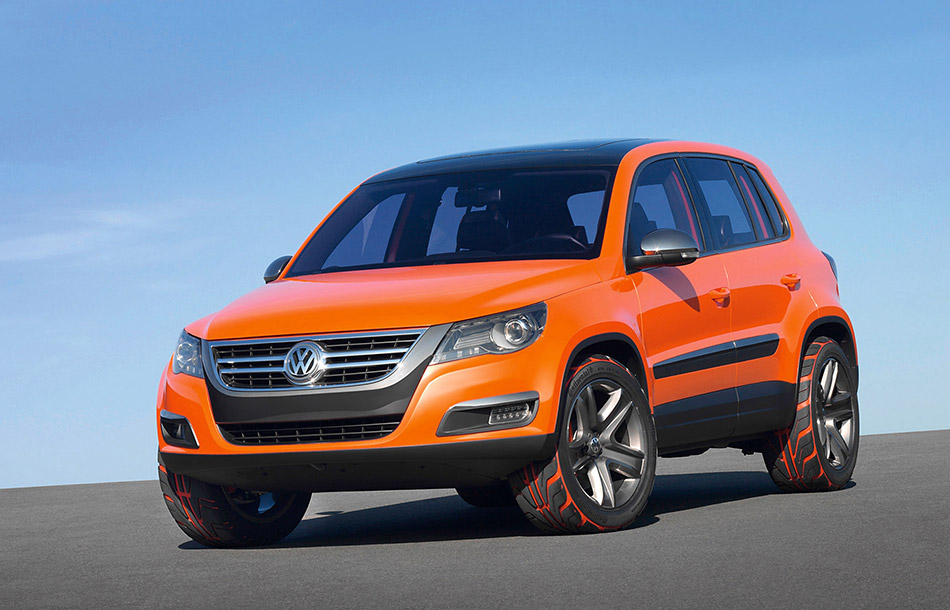 The concept car being presented in Los Angeles is powered by a "Clean TDI" that is an entirely new development – a diesel engine of the next generation. In this diesel of the future Volkswagen will employ a modular concept of different systems to once again significantly reduce emissions. One of these powertrain systems includes a NOx storage catalytic converter and as a whole reduces nitrogen oxides by up to 90% compared to engines known today.. The "Clean TDI" from Volkswagen will satisfy the strictest emissions standards in the world.

The "Clean TDI" introduced in the Concept Tiguan is also one of the first components of the BLUETEC offensive initiated jointly by Audi, Mercedes-Benz and Volkswagen. The goal of this partnership is to establish the concept of BLUETEC as a uniform label for clean and low consumption cars and SUVs with diesel engines. BLUETEC denotes diesel drives that comply with even the strictest emissions regulations of the US market. The technologies used and individually developed by each manufacturer serve to reduce nitrogen oxides (NOx) in particular – the only exhaust components that lie above the rates of gasoline engines due to the conceptual design of diesel engines. The BLUETEC partnership was recently started in the course of the LA Auto Show.

Concept Tiguan is characterized by a design full of power and clarity. It is a design as only German automobiles possess

Power.
"It was very important to us to have the car appear powerful. Muscular. For us that had a higher priority than anything else", explains Klaus Bischoff, Head of the Design Centre in Wolfsburg. Bischoff continues: "An offroader needs a long hood and an upright position. That lends the vehicle self-assuredness and power."

And that has consequences: The Concept Tiguan comes across as self-assured, with high value, grown-up, astute. It transfers the Touareg idea of a highly capable touring car and SUV into another class. The Tiguan does not stop where normal tracks end. But it does not acquire this talent at the cost of refined street manners, rather it masters the ride through both worlds – of asphalt paths and nature's paths. The design of the Concept Tiguan, specially built for the auto show in Los Angeles, makes precisely this clear.

The insignia front grille of the Concept Tiguan was designed to be three-dimensional.

A typical, familiar, congenial Volkswagen. Yet everything is new, further developed. The lead exterior designer Klaus Bischoff: "We gave the insignia front grille a powerful contour.. Although we have taken a step forward, we still retain the same symbols introduced on our new models of the recent past." And those are details, as in the case of the Concept Tiguan, that include the dark-anodized metallic tone of the insignia front grille that contrasts with the body color, the grid pattern integrated here with two domi­nant cross struts to the left and right of the VW logo, and the chrome frame. It is the headlamps that join together with the insignia grille and the bumper.

The engine hood brings up the headlamps and lends the face a very focused expression. The Xenon headlamps themselves are a refined visual treat, because– similar to large studio spotlights – they are supported along their central axes and appear to float freely inside their housings. Given a broad and powerful shape are the bumpers beneath the headlamps, laterally completed by fog lamps placed in an own frame.

The real character of the front end however is achieved in the interplay of all design elements. And the totality of the 1.85 meter wide, 1.69 meter high and 4.40 meter long Concept Tiguan demonstrates a clarity of forms and proportions that let it stand out distinctly from the majority of SUVs in the jungle of the big city. Klaus Bischoff explains how this clarity is achieved: "Volkswagen Design results from a clear architecture made of lines andsurfaces. The baselines are reduced to only few and they are full of suspense. That's what gives the Concept Tiguan such a distinguished and charismatic character."

Nothing less applies to the silhouette of the Concept Tiguan. Here too clarity and power dominate the forms, and here too there is no detail that is random in appearance or not thought out to its conclusion. Viewed from the side, except for the small VW symbols in the 19 inch wheel rims, there is no logo that "tips off" the viewer that the Concept Tiguan is a Volkswagen. And yet at first glance it is immediately apparent that this is a Volkswagen, and especially from this perspective it can be made out as a brother of the Touareg. It is immediately clear that this SUV has a European, a German origin. Clarity and power express themselves in very distinctive wheel arches here, a window line that rises toward the rear, door and fender surfaces that are once-again three-dimensional – with a strong modulation – and unmistakably designed C-pillars.

Every detail here follows a logic of form that binds the totality together. The Concept Tiguan exhibits the same visual presence as the Touareg. Typical for VW is how the emphasis is put on the wheel archs and of course the succinct C-pillars positioned on muscular shoulders.

Since the Concept Tiguan is a study, the designers are also forging new paths when it comes to tires. The 19 inch tires for these prototypes were developed by Continental. The key feature: They have an orange radial stripe beneath the tire profile that matches the paint color of the Concept Tiguan. This radial stripe is not simply painted on, rather the orange penetrates the rubber layer as a "baked in" component of the tire's cord casing. The orange stripes visible in the silhouette emphasize the sizes of the tires. Meanwhile, the 19 inch alloy rims that retain the same Anthracite color as the body trim are a concrete proposal for the later production vehicle.

Typical of Volkswagen is the design of the rear end. Here too the description is: Typical and yet completely different. Typical, because the basic construction of the taillights follows that of the Eos or Passat variant, and they are part of the powerful shoulder section.. Different, because the overall design takes new directions, the steep tailgate extends far into the bumpers and is a design component that joins classic, pure SUV elements to contemporary, urban forms. Right below the tailgate is the vehicle license plate. The lowermost bumper section is unpainted, which mirrors the front end with regard to its protective strength in offroad use. Distinctive are the integrated diffuser and the exhaust pipes next to it on the left and right that also have dark trim.

In the interior the study holds to the colors black, silver and orange. Black components include the leather seats, the instruments, some of which are also trimmed with a vintage style leather, the door trim and leather steering wheel. Silver: The instruments themselves as well as the door handles, inside and out. Orange: All leather seams and the orange tire stripe pattern integrated in the center seat panels. The reason that a friendly atmos­phere prevails in the Concept Tiguan in spite of the dark interior equipment lies not only in the interior design but in the transparent 1.34 meter long and 0.85 meter wide panoramic sunroof. 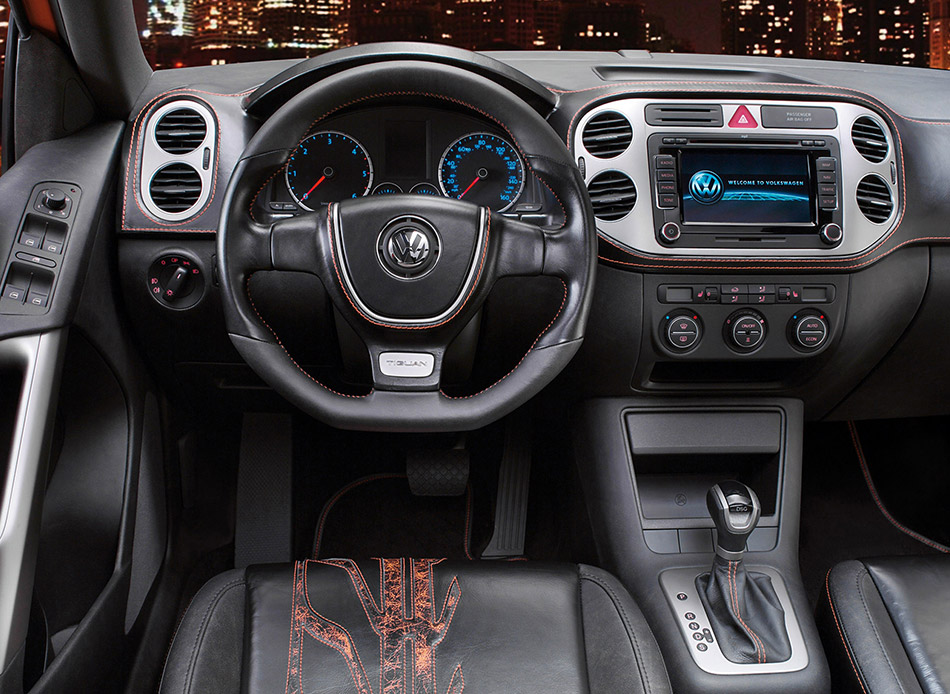 When taking a seat in the concept car one recognizes immediately that this is a well thought-out, ergonomically designed and spacious interior. Seating is equally comfortable at all five occupant positions on board the Concept Tiguan. The rear seat bench can be adjusted longitudinally and has asymmetrical fold-down capability. When folded down the Concept Tiguan can handle objects up to 2.5 meters in length of any imaginable type and transforms itself into a MPV. In the first quarter of 2007 the facts will come out on this and numerous other technical innovations of the new Volkswagen. And indeed at that time the Tiguan name will no longer qualified by the word Concept.