Volkswagen is presenting in Paris the world premiere of a new generation of the Touareg luxury class SUV. The market launch of the new version of the top-seller will take place at the end of November 2006. The Touareg, equipped with over 2,300 redesigned parts, looks different from its predecessor with a completely modified front section with crest radiator grill, distinctive headlights and much more. In addition, a substantial amount of new and sometimes unique technical developments are being employed. The Touareg will also be available as the first Volkswagen with an eight cylinder direct injection gasoline-powered engine (V8 FSI, 257 kW / 350 hp). 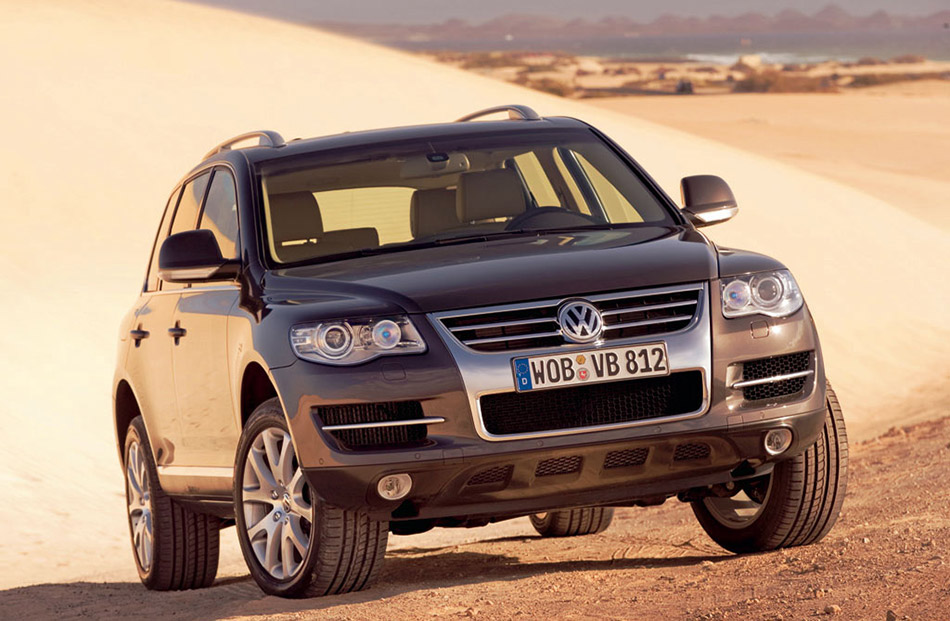 ABSplus, developed and patented by Volkswagen, is a world first: The standard equipment system shortens the braking distance of the Touareg by up to 20% on loose driving surfaces. Before now SUVs became unstable when braking hard on surfaces such as gravel or sand and steerability and stopping distance were significantly impaired. This is where ABSplus comes in: Thanks to an innovative traction control system the Touareg pushes parts of the surface material in front of the temporarily locked-up wheels. This creates a type of braking wedge. The result: Braking action is greatly increased without impacting steerability and the stopping distance is correspondingly reduced.

No less innovative than ABSplus is Adaptive Cruise Control (ACC) with a new follow-to-stop feature: in this combination the system is referred to as Front Scan. The radar-based distance control automatically slows down and accelerates the vehicle within a previously defined range of speed depending on traffic conditions. The system now employed in the Touareg slows the car down to a complete stop in emergency situations. Also new: the stopping distance control integrated into the ACC system. Ahead of certain situations it "arms" the brakes as a preventative measure.

Another assistant system in the new Touareg generation, being introduced for the first time in a Volkswagen, is the lane changing assistant (Side Scan). This system monitors the area next to and behind the Touareg and a control lamp in the exterior mirrors warns of a possible risk of collision when changing lanes.

The Touareg masters tough off-road use and extreme tours and yet offers the comfort of a sedan and remarkable sportiness. Previously, this dynamic could be increased in terms of the chassis via an optional sport chassis for Touareg models with steel suspension. A sport chassis – with dynamic response in this case – is now also being added to the models with pneumatic shock suspension. "Driving dynamics package with dynamic response" adds a hard spring rate to the already existing "Sport" mode of the manually and automatically controllable pneumatic shock absorption system. This increase in dynamics and safety is achieved, among other things, via reinforced stabilizers, absorbers regulated by steering wheel movement, a modified pneumatic shock absorption system and new software. Driving comfort remains just as good in normal suspension mode as with models without sport chassis.

In the area of passive safety a new rollover sensor for sensing vehicle yaw angle and yaw speeds is also being employed. It detects whether the vehicle is getting into a rollover situation. The data from the sensor flows together with the parameters detected by the acceleration sensors built into every Volkswagen into the airbag control unit. If in a comparison of the data the risk of a rollover is determined, the side and head/thorax airbags are automatically activated to lower the risk of injury.

High-end in the entertainment area, too: The Touareg is the first SUV in the world that can be equipped with a sound system from Danish hi-fi specialist Dynaudio. Main features: Distortion free hi-fidelity sound, ten high-end speakers, ten-channel amplifier and 620 Watt total output.

The front section of the Touareg was completely redesigned. Except for the engine hood no part remained untouched. The new Touareg is immediately recognizable as the latest generation by the typical Volkswagen crest radiator grill in chrome design. Although always individually designed for each model, it has become an unmistakable stylistic feature of the brand. The second distinctive feature of the new generation Touareg are the organically shaped headlight casings (optionally bi-xenon with cornering and turning light). Similar to the latest Volkswagens such as the Eos, the lower area features a round curvature. A single glance at the headlights and the crest radiator grill makes it evident that the front bumper has also been completely redesigned. Elegant: a chrome-plated transverse web in the outer air intakes of the bumper. Illuminating during inclement weather: the round, protectively integrated fog lights. Aerodynamic: The exterior mirrors were also redesigned and now offer and even braver face to the wind.

Modifications to the rear section, too: There's a new hatchback spoiler that improves aerodynamics. The rear and brake lights were technically modified and the optional tinted glass of the rear lights was improved. The designers also redesigned the lower area of the bumper and exhaust pipes for a more dynamic look. 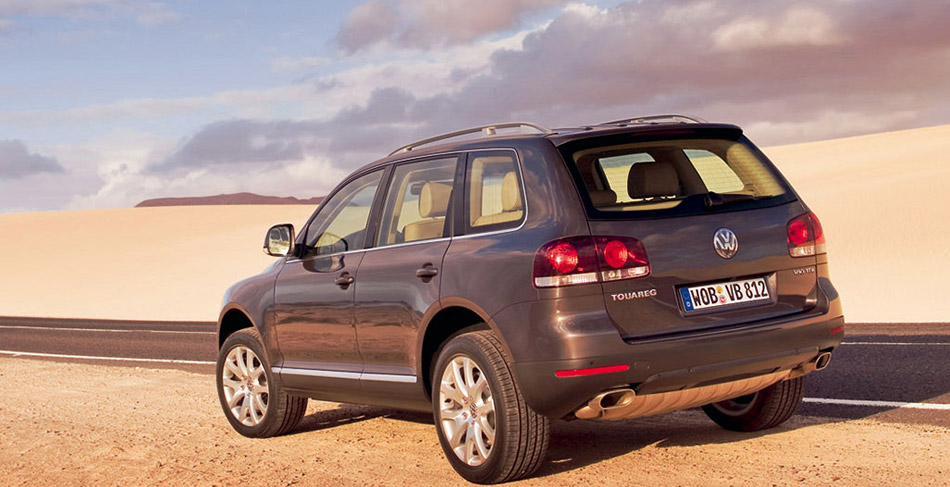 A basic and a "comfort" seating system is available for the Touareg. The "comfort" seating system was redesigned for the latest Touareg. The partially leather ("Cricket") and fully leather ("Nappa") seats are now not just distinguishable by leather, but also by design. Both are also distinguished from the unchanged basic seating system. In general, the back seat of all versions were redesigned. It weighs eight kilos less and when folded down now offers a level surface between backrest and cargo floor.