The two-door, four-seat T-ROC combines the agility of an all-wheel-drive SUV with the airiness of a convertible, thanks to its roof design.  The middle section of the roof – made from a carbon composite – can be removed in two halves, each of which can then be stored in the boot. 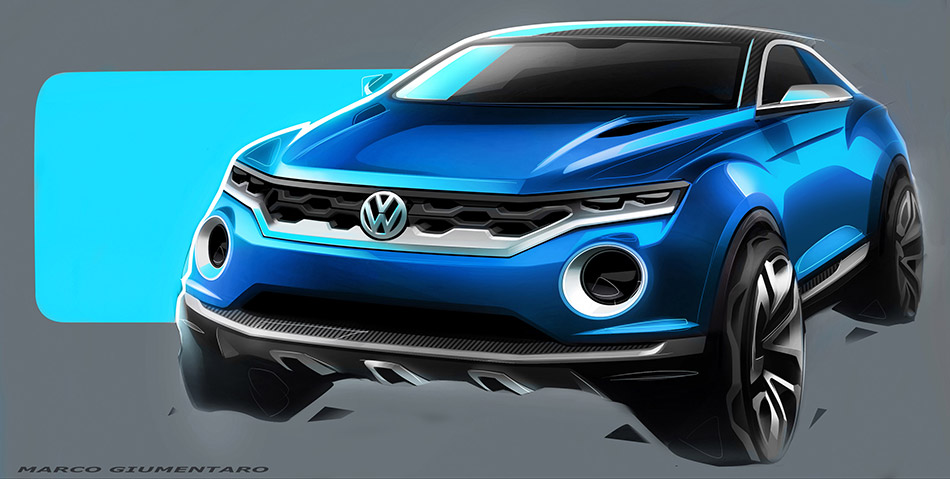 The team at Volkswagen Design, led by Walter de Silva and Klaus Bischoff, have advanced the brand's ‘SUV DNA' in the T-ROC, while also preserving its history.  Immediately striking are the 3D radiator grille with large honeycomb-shaped opening, LED headlights, daytime running lights and indicators and prominent round headlamp modules which hark back to the Karmann Ghia Type 34.  At the rear, LED elements also abound, with strong, purposeful design.

Both at the front and the back, the T-ROC makes use of integrated cameras which project images when driving off-road into the cabin via a tablet mounted in the centre console.  This allows the driver to see potholes or large stones which could damage the car – or certainly hinder progress.

Power for the T-ROC is provided by a high-torque (380 Nm from 1,750 rpm) and fuel-efficient 184 PS turbodiesel engine connected via a newly developed seven-speed DSG gearbox to a 4MOTION all-wheel-drive system.  This engine will be familiar to drivers of the new Golf GTD.  Top speed is 130 mph in this concept car, with zero to 62 mph in 6.9 seconds.  The T-ROC is predicted to have a combined fuel consumption of 4.9l/100km (57.6 mpg), equating to 129 g/km of carbon dioxide.

Three driving modes – ‘Street', ‘Offroad' and ‘Snow' – are selectable at the turn of a wheel on the DSG gear-shift grip.  Parameters of the running gear, engine-gearbox unit and hill start and hill descent assist systems are modified depending on the mode selected.  The active mode is shown in a pop-up window in the fully digital instrument cluster.

In addition to the digital cluster, the T-ROC also features a 12.3 inch colour display tablet which is firmly locked into the dashboard with the upper two-thirds of the display extending out from the dashboard.  The multi-touch display (which reacts to finger gestures) is user-configurable, and the range of colours used and information displayed on the tablet change according to the driving mode selected.

The T-ROC's name is derived from ‘T' as a reference to the names of current and future Volkswagen SUVs such as the Taigun, Tiguan and Touareg, and ‘ROC' meaning the all-wheel-drive car is as at home on ‘rocky' trails as on tarmac.