Carlsson is proud to present a truly extraordinary supermodel at the Geneva Motor Show: the Carlsson CS50 Versailles based on the new S-Class, and specifically developed for China's ultra-wealthy ‘Taipan' clients; the new ‘royalty' of the Middle Kingdom. Resplendent in pure gold inside and out, more than 10 of these 25 limited edition cars have already been allocated to existing Carlsson clients, even before its official unveiling.

"The best in a different way." - The Carlsson CS50 Versailles was developed with this motto in mind. Superlative traditional craftsmanship is the cornerstone of this glittering limited edition model. At Versailles, near Paris, King Louis XIV (1638-1715), also known as Louis The Great, or the Sun King, transformed his chateau into a magnificent fairy tale palace. More than 300 years on, the spectacular Carlsson Versailles has been created, with similar care and attention to detail, by Carlsson's master craftsmen.

In a process taking over 200 man-hours, the bodywork of the Carlsson Versailles is adorned with more than 1,000 sheets of wafer-thin gold leaf. A special Squirrel hairbrush is used to absorb these 80 x 80 mm gold leaves, and place them on the suitably prepared surface in an irregular laying pattern known as a Roman Association. This is merely the start of an elaborate process taking more than 14 days, during which the bespoke clear-coat undergoes its labour intensive application, drying and sealing to ensure a unique and perfect finish whose practicality and durability is comparable to that of conventional paint.

In a specially developed process, a further 278 interior and 30 exterior components receive a lustrous gold finish, with exterior elements such as the radiator grille, door handles, and grille inserts in the front bumper left glistening with a rich golden sheen. In the plush cabin, various buttons, knobs, air vents and even the speaker grilles also take on a golden glow, forming an aesthetic symbiosis with the gold leaf covered frame, panels and trim inserts. This task requires more than 100 man-hours of specialist craftsmanship to complete, and the value of the 985 gold used in the interior alone is around 12,000 euros. The skill of Carlsson's craftsmen is also apparent in the soft Nappa leather from their Signature Line that envelopes the seats in a contrasting combination of dark brown and champagne hues set off by the gold highlights. A gold Carlsson logo is incorporated into the champagne section of the leather as the finishing touch.

The interior can be further customised according to client wishes. Large HD screens, a REVOX sound system, humidor, and bespoke business facilities with a Wi-Fi hotspot are just some of the infotainment technologies that can be incorporated. Clients can choose from three leather types across a wide range of standard and custom colours and textures, with bespoke stitching patterns, and embossing as individual as the owners themselves.

Continuing the Palace of Versailles theme, Carlsson has re-interpreted the luxurious concept of the disc wheel, developing a new stand-alone alloy wheel design specifically for this very special W222 S-Class. Dubbed the 1/12 EVO Versailles Edition, this unique wheel is exclusive to the Carlsson CS40/CS50 models, and features a large mirrored surface with a grand appearance strongly reminiscent of the Hall of Mirrors at Versailles. These wheels come in 9.0J x 20 and 10.5J x 20-inch sizes, with 245/40ZR20 front and 285/35ZR20 rear tyres specially developed by Vredestein for the S-Class. 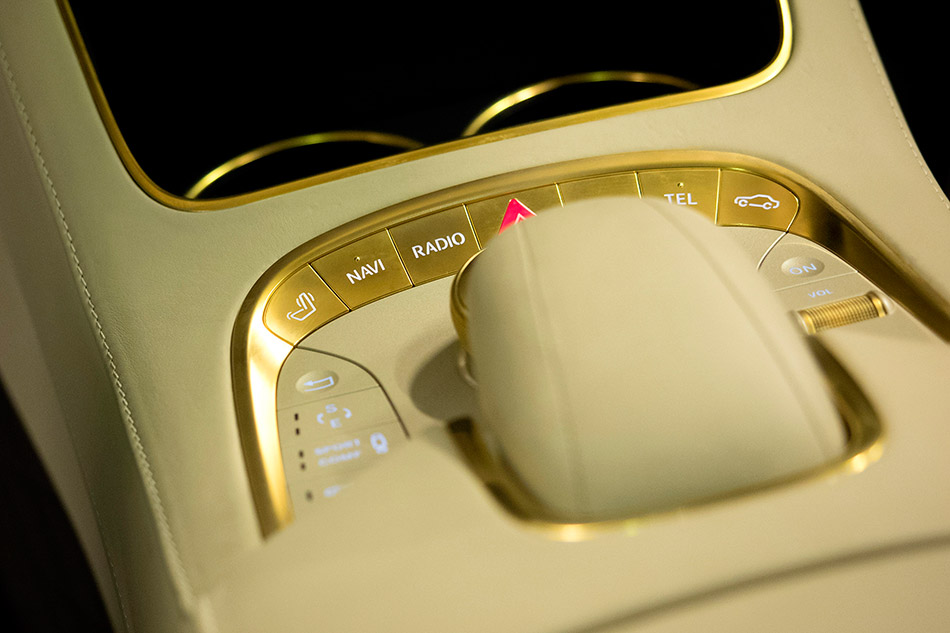 Whether at rest or on the move, the striking looks of the Carlsson Versailles are further emphasised by the aerodynamic body styling additions. Starting at the nose, the new front bumper with its extra air intakes and RS spoiler lip emphasise the three-dimensional look of the grille, giving the S-Class a more purposeful visage. The more prominent side skirts lead your eye along the cars flanks, and visually tie the distinctive front to the new rear valence with its uniquely shaped exhaust outlets. Together with the bootlid spoiler, which reduces lift over the rear axle at speed, these new Carlsson elements create an elegant and potent rear view.

For the new S-Class in general, Carlsson offer several alloy wheel designs with two or three colour options. These include the sporty Carlsson 1/10, the classic Carlsson 1/16 RS and the modern Carlsson 1/5, all available in 19 to 21 inch diameters. The flagship model of this exclusive range is the 395,000 euro Carlsson CS65 Versailles, whose V12 Bi-turbo engine produces 700hp and 1050 Nm of torque. The entry-level CS40, and mid-range CS50 use the V8 Bi-turbo engine.

Carlsson at the Geneva Motor Show:

Elegant cars, torquey engines and a racey atmosphere all lead right to the Carlsson stand at the Geneva Motor Show (Hall 6, Stand 6251) where you are invited to view our numerous world premieres. Here we will show you our athletic A-Class, dynamic CLA, the most extravagant G-Class, up-to-the-minute refinements for the GLK, and how realistic music sounds in the CML35 REVOX. Finally, join us in celebrating the golden world premiere of the Carlsson CS50 Versailles.