ABT Volkswagen Golf I GTI

The Beetle and the VW Golf couldn't have been more different, but the changing of the guard back then in spring 1974 went smoothly. The angular Giugiaro FWD and hatchback design has been Germany's best selling car right from the start, with the exception of 1980. And ABT has also thought about how to tune this model right from the start. What they came up with in 1982, shortly before the launch of the Golf II, was as provocative as a punk among nuns: a 7'' widebody for DM 15,000 and from naught to 100kph in 6.8 seconds – that was really an entirely novel Volkswagen. 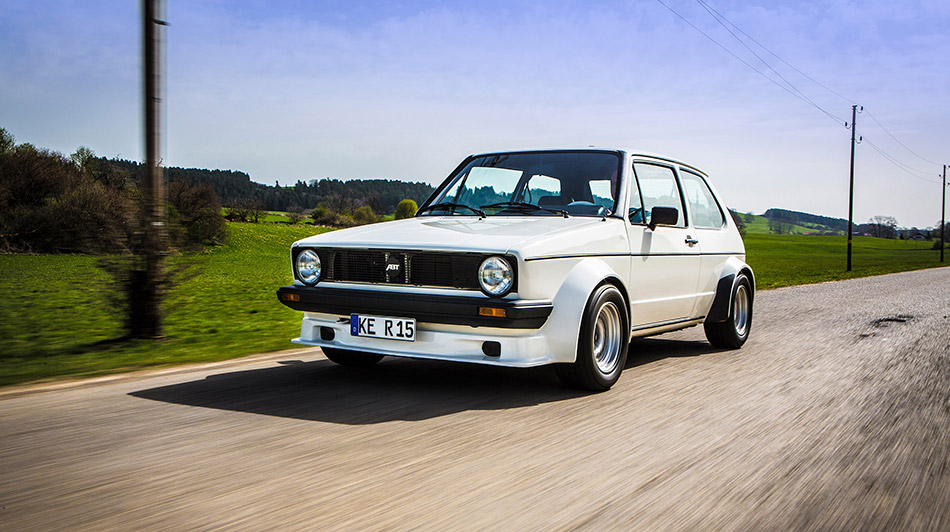 "Like a bodybuilder in a white wedding dress," read a car mag's header recently when the editors indulged in nostalgia. "And this isn't even unfair. After all, for some people driving this ABT may well have been the best day of their lives," says a non-offended CEO Hans-Jürgen Abt. In terms of a dowry, the Bavarians had also been quite generous: an almost 50% better performance than a serial GTI, or 163hp/120kW. Incidentally, given the superb power/weight ratio of 5.2kg/hp the current GTI (162kW / 220hp) is only 0.3 seconds faster when reaching 100kph.

Responsible for that kick was a KKK exhaust gas turbocharger, which at that time was only available from Volkswagen for the very first and very expensive Quattro. In qualitative terms, ABT has always been more of a refiner than a tuner. The Golf I's engine, for example, was made stable with a number of high-end components like autothermal pistons and a special crankshaft. And then there was the roaring "turbo exhaust system" and the ABT "super suspension". The wheel spacers made of steel are also still of a very convincing workmanship. Alloy wheels in a very modern design with wide-base tires in 205/60R13, now looking rather peculiar, rounded off the ABT Golf I on the outside.

Inside, ABT gave its "baby" a white-leather sport-type steering wheel and various additional instruments. But in contrast to the Golf VII, there is no digital display. A pity, really. After all, it was also in 1982 that the popular Smiley-Emoticon was invented. But no matter. We can always smile ourselves, can't we?!

ABT Sportsline says thanks for 40 years of Golf and a wonderful car to work with.