Previously codenamed AM305, the Aston Martin AMV8 Vantage is the basis for a smaller third Aston Martin model, due to be launched in 2005, and will sit alongside the DB7 and the flagship Vanquish. The AMV8 Vantage will be hand-assembled at Aston Martin's state-of-the-art production facility at Gaydon, in the United Kingdom, which is currently under construction.

The name Vantage – which will also be adopted for the production version - was chosen due its long historic links with Aston Martin. This time it's a specific model name rather than denoting a high performance version.

The AMV8 Vantage is a tailored two-seater sports car that retains a front mid-engine/rear-wheel drive layout. Its design work was undertaken by Henrik Fisker, Aston Martin's Design Director, and his key objective was to produce a thoroughly modern Aston Martin. Another aim was to ensure that the interior layout and equipment were unique to Aston Martin and could be easily carried over into the production car.

There are also a number of traditional Aston Martin design cues which have been incorporated into the AMV8 Vantage's styling such as the front grille shape and the typical side strakes found on all Aston Martin models.

Chassis and Body Structure
The AMV8 Vantage is the first model to use Aston Martin's unique VH Platform Strategy (Vertical/Horizontal), which will form the basis for all future Aston Martin models.

"Much of the technology that has been developed from the Aston Martin Vanquish will be adopted for the production AMV8 Vantage," said Jeremy Main, Director of Product Development for Aston Martin. "It has a unique body and chassis constructed from aluminium and composites, AMV8 Vantage is a very advanced sports car offering high degrees of engineering efficiencies, structural integrity and torsional rigidity." 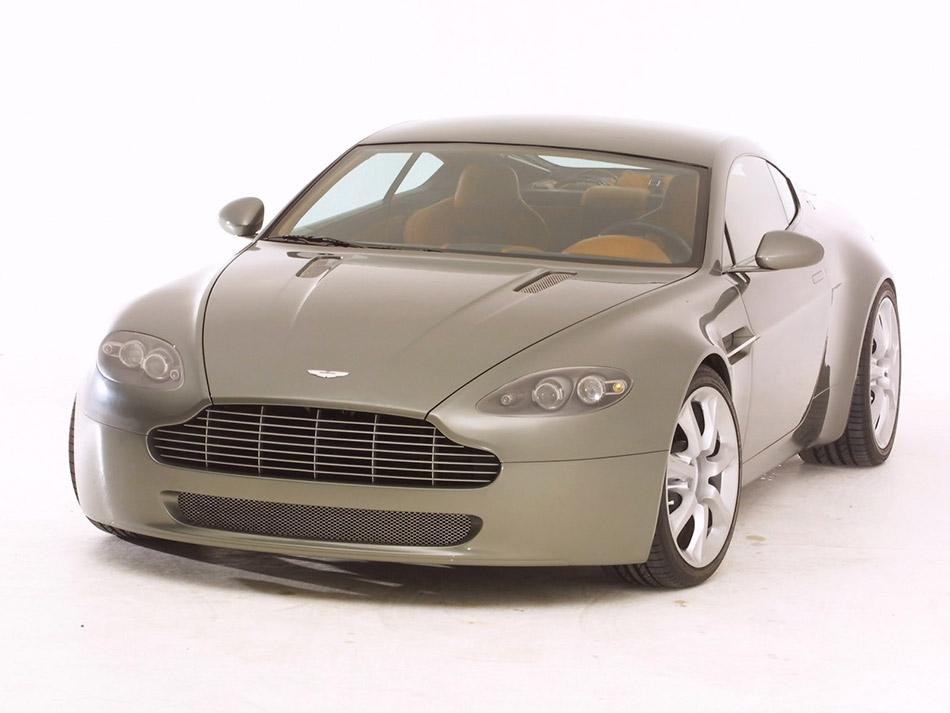 Styling
Visually stunning, the look of AMV8 Vantage is very much of a modern Aston Martin. However, like all Aston Martin models there are subtle lines and embellishments that help create a powerful-looking sports car. In fact the design brief was to make the car look like a muscular athlete wearing a tailor-made suit.

From the exterior, AMV8 Vantage is striking and perfectly proportioned from every angle. Each carefully detailed feature provides graphic evidence of the painstaking craftsmanship and quality, which are synonymous with the Aston Martin marque. Adamant that AMV8 Vantage should not be a pastiche of retrospect design, Henrik Fisker created a pure, elegant and classic body that reflects the heritage and tradition of the Aston Martin brand.

The long bonnet (hood) and two-seater cabin create an instantly recognisable stance, while minimal front and rear overhangs, combined with a wide track, appear to push the rear wheels out and enhance the extremities of the bodywork.

"AMV8 Vantage features many of the design cues that have become the basic DNA for all Aston Martin models," said Henrik Fisker. "It was important to ensure that the car's design was pure, clean and modern, while at the same time you should be able to put your hand over the front nose badge and still recognise the car as an Aston Martin."

Interior
One area that has received considerable development is the AMV8 Vantage's cabin design. Great effort has been made to ensure that everything the driver and passenger touch is bespoke and Aston Martin unique. This is something also that will be carried over into the production car.

The AMV8 Vantage features a host of switch gears, which perhaps owe more to the styling cues of premium watch design and prestigious home entertainment systems than from car instrumentation. Finished in an imaginative combination of different leathers and anodised aluminium, customers will be offered an infinite choice of body colours and upholstery schemes as well as the option of being able to request different materials.

"From the outset, the look, feel and functionality of the interior was a key priority," said Henrik Fisker. "Aston Martin is taking a new direction in its approach to design. We wanted to ensure the AMV8 Vantage reflected the new direction that Aston Martin is now taking – modern, advanced technology but above all Aston Martin design."

Powertrain
The all new engine is a 4.3 litre, low emissions all alloy V8 which is unique to Aston Martin. This new V8 will use the latest technology to deliver outstanding performance in all environments.

The layout of the powertrain adopts a transaxle configuration, whereby the front mid-mounted engine is connected to the transmission - at the rear of the car - via a torque tube. This configuration provides the car with near perfect 50:50 weight distribution, outstanding handling characteristics and excellent all round capabilities.

Conclusion
While the production aspirations for the AMV8 Vantage is higher than any of the previous Aston Martin models, the car will still retain a high degree of exclusivity – an important characteristic of the British marque.