As largely known, the core competency of the company OK-CHIPTUNING at Neukirchen-Vluyn on the Lower Rhine is software optimization of engine control units ECU for power boosting. This is called chip tuning, engine map optimization, ECU mapping or simply chipping. But for OK-CHIPTUNING that means not only more of maximum output, but also more powerful torque characteristics with fuel economy effects. Intense consulting rounds give information about what kind of customer's wishes can be implemented for how much of expense.

Since ten years meanwhile, Kai-Uwe OTTLINGHAUS is best known by his different projects – as e.g. the legendary S2 Coupé, out of five cylinders of which have been teased out up to 1,000 HP – well known in the "old"five cylinder scene. That's why it is nothing more than logical, that OK-CHPTUNING pays attention also to the "new" Audi five-cylinder engines. 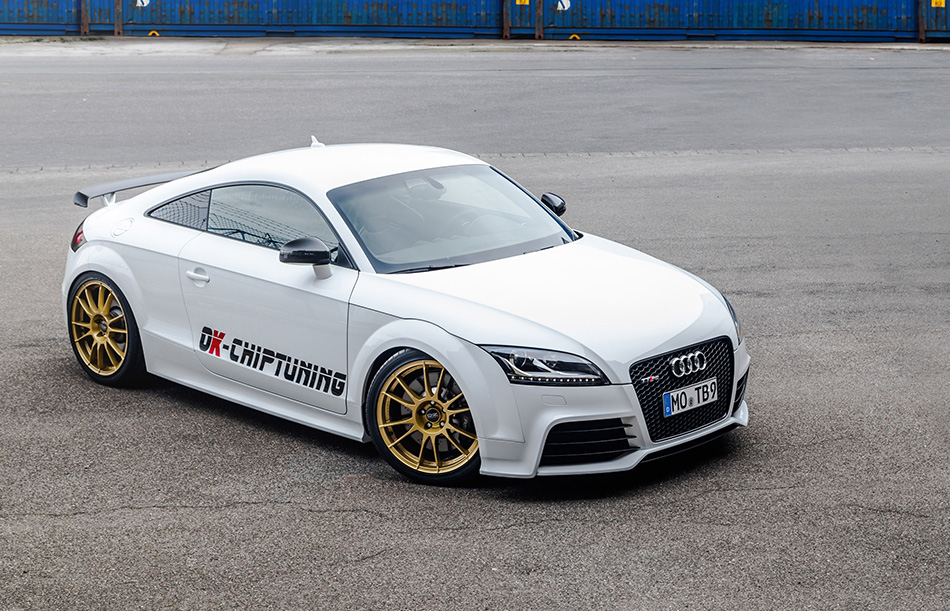 A word and a blow! This time, object of desire is a 2013 model 7 speed S-tronic Audi TT RS Plus in ibis white. The serial engine brims already of over 360 HP and 465 Nm of torque. The "cure therapy" contains also the installation of a Wagner Evo 2 charge air cooler, the correspondent ECU software optimization and S-tronic (DQ500), as well as a DK-Turbotecnic Dortmund exhaust system with valve control beginning at the turbocharger. The result of is that meanwhile 453 agile HP (= 333 kW) warrant for drive and 659 Nm of max. torque dragging the power train.

Also in fields of driving dynamics the OK-CHIPTUNING team was not idle. A H&R club sport chassis has been combined with a stabilizer kit of the same origins and adjustable coupling bars. The aluminum strut bearings are likewise adjustable. The wheel-tire-combination consists of still up-to-the-minute OZ rims type Ultraleggera HTL in 9x19 ET42, covered by Toyo Proxes in 255/35-19. Last, but not least, the carbon rear wings and the front and rear apron – each one black coated – earn to be mentioned.

Thanks to OK-CHIPTUNING, this Audi TT RS Plus is now still more distinctive and evidently conceived to get in and to convince oneself about its capacities.