The new BMW X4 is based on the technical blueprint of the BMW X3, but displays a sporting character very much its own and takes dynamics to another new level. That much is clear when you view the new model head-on. The large air intakes positioned on the outer edges of the front end and the character lines in the front apron allow the BMW X4 - with its signature BMW twin headlights and front fog lamps (both optionally with LED technology) - to maximise its visual presence on the road. The roofline reaches its highest point above the driver and then swoops down smoothly to the trailing edge of the tailgate, mimicking the design language of a classical sporting coupe. The signature swage line running along the flanks of BMW models is split into two on the X4. The first section rises dynamically from the front wheel arches to the rear door handles, while the second part draws the eye to the muscular sculpting of the rear wings. The rear end, complete with L-shaped LED lights in exclusive X4 design and diffuser-look styling, likewise highlights the outstanding dynamic ability of the new BMW X4 - even before it turns a wheel. The driver and front passenger sit 20 millimetres lower than in the BMW X3. In conjunction with the two-seat look of the rear, this accentuates the coupe character of the new BMW in the classy and exclusive interior as well. At the same time, the X4 offers generous levels of space for up to five people and - thanks to the standard 40:20:40 split rear seat backrest - impressive variability.

The unparalleled BMW EfficientDynamics technology package also minimises the fuel consumption and emissions of the new BMW X4. Included are features such as the Auto Start Stop function and coasting function (if an eight-speed automatic gearbox is fitted), Brake Energy Regeneration and on-demand operation of ancillary units, ensuring an admirable degree of environmental compatibility to go with maximum driving pleasure. Also available as an option to add further efficiency to the mix are fourth-generation reduced-rolling-resistance tyres, which reduce the CO2 emissions of selected variants of the BMW X4 by another 7 g/km.

The BMW ConnectedDrive features available for the new X4 allow BMW to restate once again its leadership in the link-up of driver, vehicle and outside world. Among the highlights in the new BMW X4 are the full-colour BMW Head-Up Display, the anti-dazzle High Beam Assistant, and Driving Assistant Plus including Lane Departure Warning, Active Cruise Control with Stop & Go function, preventive pedestrian protection and a Collision Warning system, which applies the brakes with anything up to maximum stopping power as required. Added to which, the optional ConnectedDrive Services also allow drivers to sign up to innovative services such as Real Time Traffic Information (RTTI), the Concierge Service and Remote Services. Facebook, Twitter, AUPEO! personalised internet radio and music platforms like Napster and Deezer have also been optimised for in-car usage and can be accessed easily on board the BMW X4.

The new BMW X4 offers the premium mid-size segment its first taste of the Sports Activity Coupe concept. Like the successful and still unique BMW X6, 250,000 units of which have now been sold, the new X4 also provides a compelling and unmistakable presence on the road. Visually, it combines to perfection the powerful character of a Sports Activity Vehicle (SAV) with the sporting elegance of a classical coupe.

The new BMW X4 may be based on the technical blueprint of the BMW X3, but the moment you set eyes on it, the new SAV reveals a dynamic personality all of its own and an even more ebullient character. At 4,671 millimetres in length, it is just 14 millimetres longer than the X3, but is also 36 millimetres lower to the ground (height: 1,624 mm) and cuts a persuasive figure with its perfectly balanced proportions and distinctive character. The large air intakes positioned on the outer edges of the front end and the precise character lines in the front apron lend the X4 a more muscular and agile appearance. This lowers the car's visual centre of gravity closer to the road, signalling its sharper dynamics. The effect is further enhanced by the fog lamps sited below the signature twin headlights (both also available with LED technology as an option). This arrangement defines the striking "three-eyed" face of every BMW X model.

The coupe-like roofline of the BMW X4 reaches its highest point over the front seats, reflecting the traditional driver focus of BMW cars, before dropping gently down towards the trailing edge of the tailgate. These stretched lines underline the sporting coupe character of the X4 particularly effectively. The standalone design of the BMW X4 is further reinforced by the fresh interpretation of the signature swage line running along the flanks of BMW models which, for the first time, is split into two. The first section rises smoothly from the front wheel arches to the rear door handles, highlighting the outstanding dynamic ability of the new BMW X4, while the second part accentuates the powerful sculpting of the rear wings. The contoured C-pillars - complete with muscular shoulders - represent a perfectly judged continuation of the theme, as does the broad and low-set rear end, which reminds the driver and passengers of the superior performance served up by the new BMW X4 before they even climb aboard.

The interior of the new BMW X4 reveals a harmonious synthesis of sportiness and exclusivity. The X4's body is mounted 36 millimetres closer to the road than that of the BMW X3. The driver and front passenger sit 20 millimetres lower and the rear passengers 28 millimetres lower, creating the feeling of a classical sports coupe. It is a sensation reinforced by the rear seat bench, which comes with the type of continuously moulded side supports normally only provided by two individual seats, but still offers space for three passengers. Equally impressive is the load capacity available (500-1,400 litres), which can be used in a wide variety of ways thanks to the standard 40:20:40 split rear seat bench. Everyday usability is further enhanced by the standard-fitted automatically opening tailgate. This can be specified as an option with the extra convenience of the Smart Opener, which allows it to be opened with a movement of the foot. All BMW X4 variants are fitted with the Radio Professional with iDrive Controller and central display. Among the features contributing to the flawless ergonomics inside the new BMW X4 is the touch-sensitive surface of the new iDrive Touch Controller (available in conjunction with the Navigation System Professional), which allows drivers or passengers to use their finger to write letters for text inputs - a navigation destination, for example. 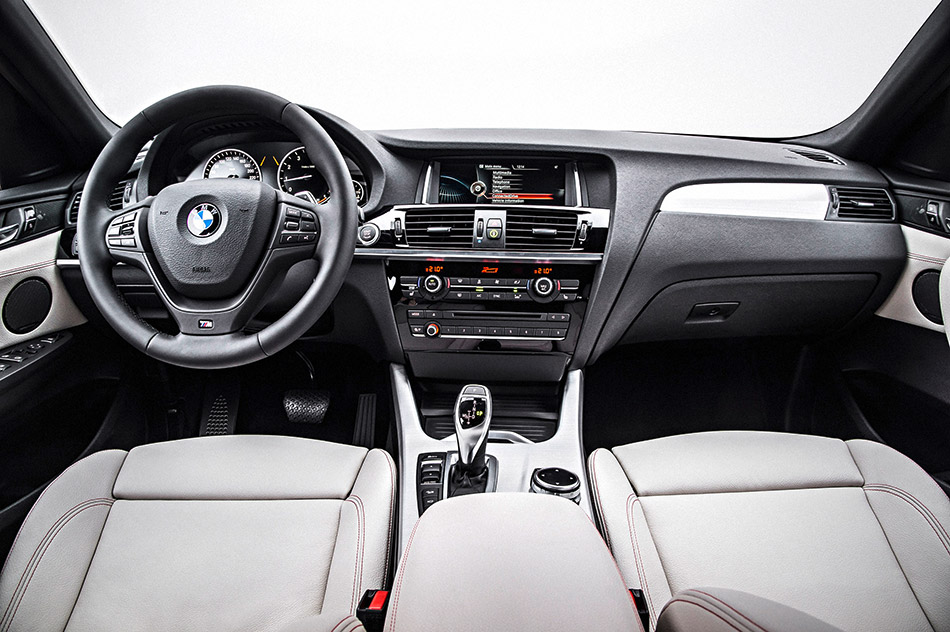 The premium quality and exclusivity of the interior are underlined by selected materials, subtle electroplated accents, a high-gloss black-panel look (in models with the two-zone automatic climate control system) and aluminium trim strips in the wood panelling. The unmistakable character of the BMW X4 is further highlighted by a level of standard equipment even more generous than that found on board the BMW X3. Indeed, the BMW X4 comes as standard with an automatically opening tailgate, a sports leather steering wheel with gearshift paddles (not available for the X4 xDrive20d with six-speed manual gearbox), variable sport steering, Performance Control and Park Distance Control at the rear.

In addition to the broad-based and high-quality selection of different colours, light-alloy wheels, upholstery variants, interior trim elements and trim strips for which BMW is renowned, the xLine equipment package gives BMW X4 customers the chance to shine an even brighter spotlight on the X character of their car. Customers can choose from two exclusive light-alloy wheel variants in 18 and 19-inch formats, six individual cloth and leather upholstery variants and a special trim strip.

The first Sports Activity Coupe in the premium mid-size segment also presses home its leadership credentials when it comes to powertrains. Indeed, customers can choose from three petrol engines and a trio of diesels from the launch of the new BMW X4. All the power units meet the EU6 exhaust emissions standard and promise driving pleasure of the highest order. The output spectrum ranges from 135 kW/184 hp to 230 kW/313 hp. Exclusive BMW TwinPower Turbo technology ensures outstanding performance while keeping fuel consumption and CO2 emissions to a minimum.

All X4 models have a sporty suspension set-up and come with the intelligent all-wheel-drive system xDrive with standard Performance Control. This ensures that drive is also split between the rear wheels continuously and as required, which further improves traction, turn-in and directional stability. Working in tandem with the standard variable sport steering, these systems allow the BMW X4 to deliver driving dynamics that surpass even those of the BMW X3 in terms of sportiness. An xDrive status display in the Control Display uses three-dimensional graphics to keep the driver informed of the car's body roll and pitch. If a navigation system is specified, all BMW X4 models also feature a compass display in the instrument cluster.

The innovative BMW Proactive Driving Assistant offers additional potential for fuel saving. This technology uses route data supplied by the car's navigation system to identify situations in advance which will require the car to slow down - e.g. on the way into towns and villages, speed limits etc. - and give suitable recommendations.

With its BMW ConnectedDrive technology, BMW has led the way in the link-up of driver, vehicle and outside world for many years. The new BMW X4 provides further evidence of BMW ConnectedDrive's position at the forefront of development.

Providing added safety and greater convenience in the BMW X4 is the optional full-colour Head-Up Display, which projects all important driving information and the assistance systems displays into the driver's field of view in high resolution. What's more, the latest-generation Navigation System Professional with ECO PRO route guidance now teams up with the iDrive Touch Controller whose touchpad allows texts - e.g. a navigation destination - to be easily inputted by using a finger. Safety and convenience can be further enhanced by optional premium features like the anti-dazzle High Beam Assistant, Driving Assistant Plus including Pedestrian and Collision Warning with City Braking function, Active Cruise Control with Stop & Go function and Lane Departure Warning. Available as options are Lane Change Warning, Surround View and the Parking Assistant, which steers the car autonomously into parking spaces parallel to the road. The option of BMW ConnectedDrive Services allows customers to access smartphone applications such as AUPEO! (personal internet radio) or Deezer (music platform) as well as innovative mobility services via a built-in SIM card.

The Concierge Service connects the car with a BMW Call Centre, allowing restaurant tables to be booked or describing the way to the nearest out-of-hours pharmacy. Remote Services and Real Time Traffic Information (RTTI) can likewise be used from the comfort of the car. Online Entertainment provides direct access to music services such as rara or Napster with their millions of music tracks as well as audiobooks. The Intelligent Emergency Call function, meanwhile, takes safety to another new level. It is triggered automatically or can be used manually. As soon as the crash sensors report an airbag deployment, the system sends the vehicle location (accurate within metres) and all key information to the BMW Call Centre via the built-in SIM card, thus enabling fast and effective assistance at the accident location.

In 2015 it will be mandatory for all new vehicles in the EU to be equipped with an automated emergency call system. With Intelligent Emergency Call, BMW ConnectedDrive already offers as standard in the BMW X4 a safety system that goes far beyond the statutory requirements for 2015.