Packed with new technologies such as available Android Auto, Apple CarPlay and new active safety features, as well as a more spacious interior and an athletic, aerodynamically optimized design, the 2016 Cruze elevates the compact car segment - from San Francisco to Shanghai and from Boston to Buenos Aeries.

It will be offered in more than 40 global markets and goes on sale first in North America in early 2016. A new, standard 1.4L turbocharged engine with direct injection and an SAE-certified 153 horsepower (113 kW) helps enable a General Motors-estimated 40 mpg on the highway with the available six-speed automatic transmission. Stop/start technology helps enhance the Cruze's efficiency in stop-and-go driving. 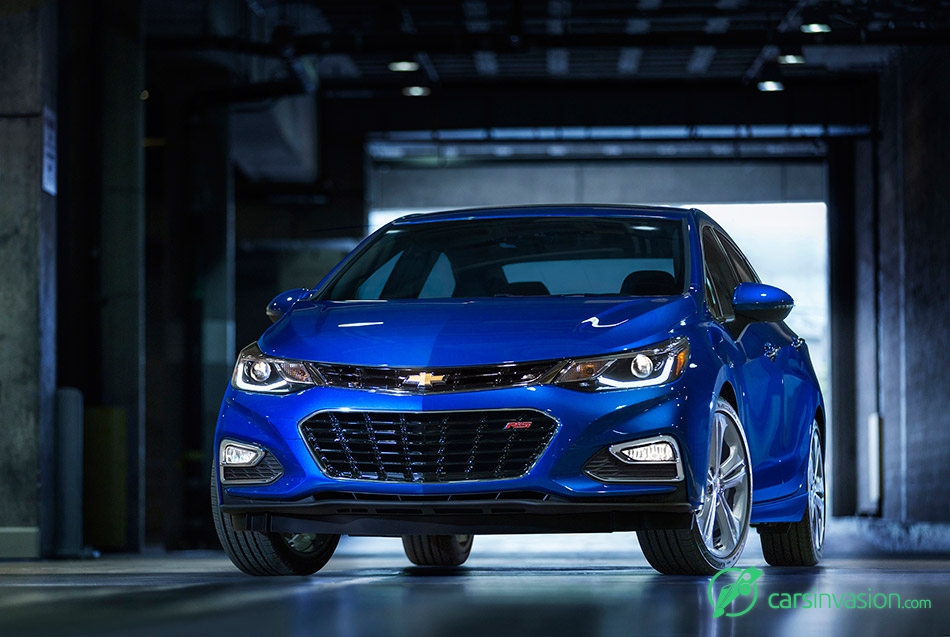 The new turbo engine and a leaner architecture that reduces up to 250 pounds (113 kg) also contribute to the new Cruze's stronger performance, with expected 0-60-mph acceleration of eight seconds.

"The 2016 Cruze builds on a very successful program that introduced Chevrolet to new customers the world over," said Alan Batey, president, General Motors North America. "We retained all the attributes that made the original Cruze a hit around the globe and built on them to make this car more sophisticated, more fun and more Chevrolet."

In 2017, Chevrolet will introduce a new diesel model for U.S. customers that builds on the success of the current Cruze diesel model.

The 2016 Cruze's expressive design balances the designers' inspiration and the efficiency-optimizing input of wind tunnel testing - leveraging the aero experience of vehicles including the Volt. The result is one of the sleekest-looking cars in the class, with a 0.29 coefficient of drag - an attribute that contributes directly to a GM-estimated 40 mpg on the highway.

Proportionally, the new Cruze is 2.7 inches (68 mm) longer and nearly an inch (25 mm) shorter in height than the current model, giving it a longer and leaner appearance. A faster windshield rake and a faster-sloping rear profile lend a sportier look to the design, while the rear profile culminates in a standard integral rear spoiler that contributes to the car's aero efficiency.

The sleek profile is complemented by detailed, layered line work in the hood and body-side panels, contributing to an overall impression of muscularity - with an athletic stance enhanced by a longer wheelbase.

"With styling influenced by the acclaimed 2014 Impala and all new Malibu, the 2016 Cruze brings Chevrolet's new, expressive global design language to the small car segment," said John Cafaro, executive director, Chevrolet Design. "The Cruze's approach to proportion and premium details adds to Chevrolet's elevation of craftsmanship, content, quality and a fresh interpretation of an identity that is unmistakably Chevrolet in every market around the world." 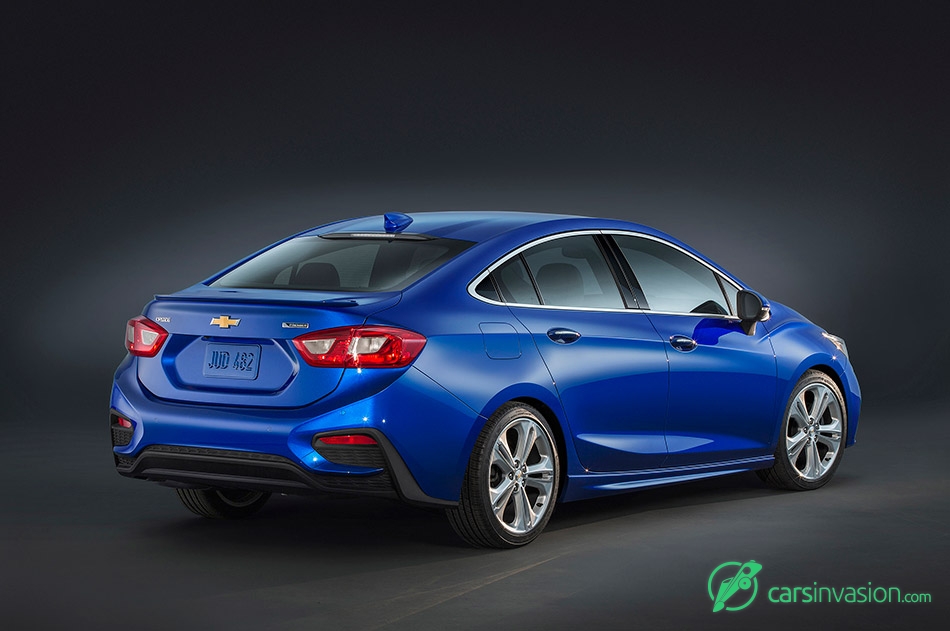 With greater spaciousness and technology, the 2016 Cruze's interior is designed to be more comfortable and a better connected environment for the driver and passengers.

Like the exterior, the Cruze's interior - and the instrument panel in particular - feature lean, muscular and layered surfaces built around the Chevrolet-signature dual-cockpit theme. It's a thoroughly modern design that emphasizes human-technology interaction through the prominent, standard MyLink screen in the "center stack."

A mixture of accents, from piano black and matte black finishes to bright trim, along with more premium features such as available heated rear leather seats and wireless phone charging, complement the cabin with an upscale ambience generally reserved for midsize sedans - but one that is becoming increasingly important to customers around the globe who want premium amenities in smaller vehicles.

Additional interior features and amenities include:

Through smartphone integration, Cruze's all-new Chevrolet MyLink infotainment system provides simple and intuitive use of smartphones in the vehicle. It integrates certain phone functions onto the Cruze's seven-inch-diagonal color touchscreen, allowing them to call up music, navigation apps and more. An uplevel MyLink radio with an eight-inch display and navigation is available and also incorporates Apple CarPlay.

Apple CarPlay takes the iPhone features owners want to access while driving and puts them on the vehicle's display in a smart, simple manner. This allows drivers to make calls, send and receive messages and listen to music right from the touchscreen or by voice via Siri. Apple CarPlay-supported apps include Phone, Messages, Maps, Music and compatible third-party apps. A full list of those apps can be found at Apple.com/ios/carplay. Apple CarPlay is compatible with iOS 7.1 or higher.

Android Auto is built around Google Maps, Google Now and the ability to talk to Google, as well as a growing audio and messaging app ecosystem that includes WhatsApp, Skype, Google Play Music, Spotify and podcast players. A full list of supported apps is available at g.co/androidauto. Android Auto requires a phone running an Android Lollipop 5.0 operating system or higher.

Using both applications is simple. A "Projection" icon on the MyLink screen is visible when a phone is not connected, then changes to indicate CarPlay or Android Auto when a compatible phone is connected via USB. 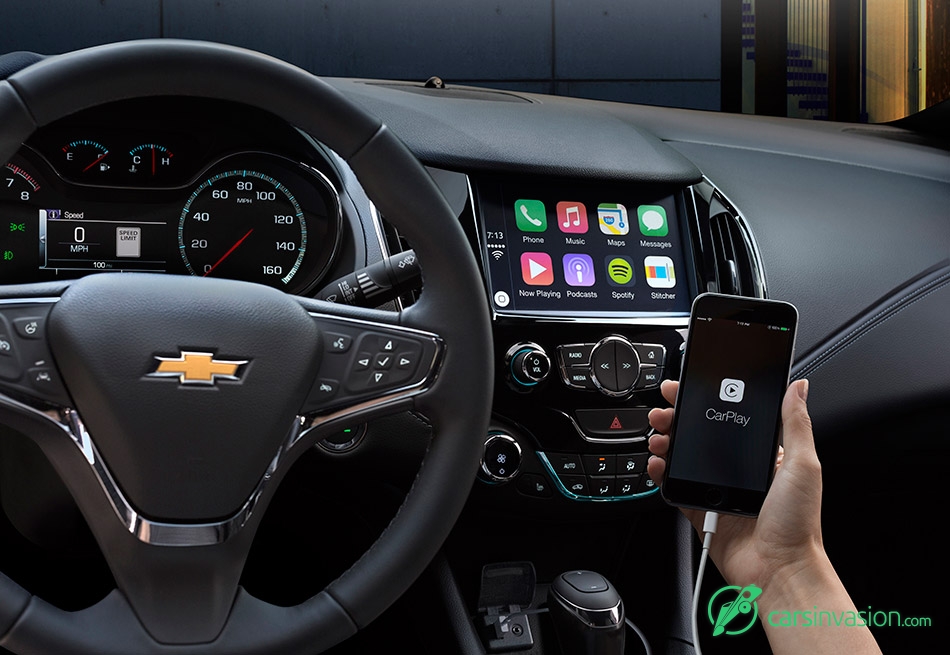 Compatible apps need to be downloaded to a phone before using. Apple and Google's privacy statements and terms of use apply. Data plan rates may also apply.

An all-new, more rigid and lighter architecture is the 2016 Cruze's foundation for driving dynamism, while also playing significant roles in safety and efficiency. It is constructed of about 8-percent hot-stamped/high-strength steels, which contributes to an approximately 27-percent stiffer body structure that is also 53 pounds (24 kg) lighter than the current Cruze.

The lighter structure is also larger than the current model, with the new Cruze's 106.3-inch (2,700 mm) wheelbase stretching nearly an inch longer, while supporting front and rear suspensions with wide tracks (60.8-inch front/61.3-inch rear). Aluminum is used strategically in the suspension systems to optimize weight and handling characteristics.

"The Cruze's chassis system is perhaps the most mass-efficient in the segment," said Ron Arnesen, executive chief engineer. "It is at the core of the car's dynamic driving character, which is designed to deliver fun with an enhanced feeling of connectivity."

Additionally, the new, more rigid architecture is the primary enabler for exceptional chassis tuning, affording more nimble and direct steering and handling attributes that foster driving confidence through precision. The longer wheelbase and wide front and rear tracks further contribute to a lower, wide "footprint," which enhances agility and the feeling of control. Additional features include:

In North America, the 2016 Cruze is driven by an all-new, standard 1.4L turbocharged engine derived from GM's new family of small gas engines. It features direct injection, stop/start technology and is matched with a standard six-speed manual or a six-speed automatic transmission. Stop/start technology helps enhance efficiency in stop-and-go driving.

The new 1.4L turbo is SAE-certified at 153 horsepower (113 kW) and 177 lb-ft of torque (240 Nm). With more torque than the current Cruze's 1.4L turbo and a lighter architecture, the new turbocharged engine is expected to deliver segment-best 0-60 performance of 8 seconds. That makes the new Cruze quicker than most competitors, while also beating most of them at the gas pump, with a GM-estimated 40 mpg on the highway with automatic transmission.

The 1.4L turbo features an aluminum cylinder block and head, which helps reduce the Cruze's overall weight to enhance performance and efficiency. Engine efficiency is also enhanced through reduced friction, including low-friction piston rings, a low-friction camshaft drive and a low-friction oil pump.

The start/stop feature automatically shuts down the engine when the car comes to a stop under certain driving conditions, such as a stoplight. The engine automatically restarts when the driver takes his or her foot off the brake.

The 2016 Cruze's safety story begins with the new, stronger body structure that incorporates high-strength steel in key areas to enhance strength and crash protection by helping to prevent intrusion into passenger compartment.

For the United States, the 2016 Chevrolet Cruze will be built at GM's Lordstown, Ohio assembly plant, with locally and globally sourced components. The plant received a $50-million investment in tooling and other enhancements to support the new Cruze's production.