Famous German car magazine AutoBILD wanted to know how the already impressive LaFerrari could be modified into an even more intimidating hyper exotic, ultimate road car. They asked renowned luxury refiner DMC to put together a render on how they would imagine a next level LaFerrari. The result is a breath-taking result, nothing short of what we would expect from them. Introducing the DMC LaFerrari "FXXR":

We are talking about a Ferrari here, a limited edition top of the line model in fact, only 499 will be built and even with a list price well of over the 1,000,000 USD mark the orders have been arriving in Maranello on a steady base … it isn't sold out yet, but that is bound to happen in the near future … still owning a ‘one of 499' modern day Ferrari just doesn't cut it for some of the more demanding customers, they want something more … something different. 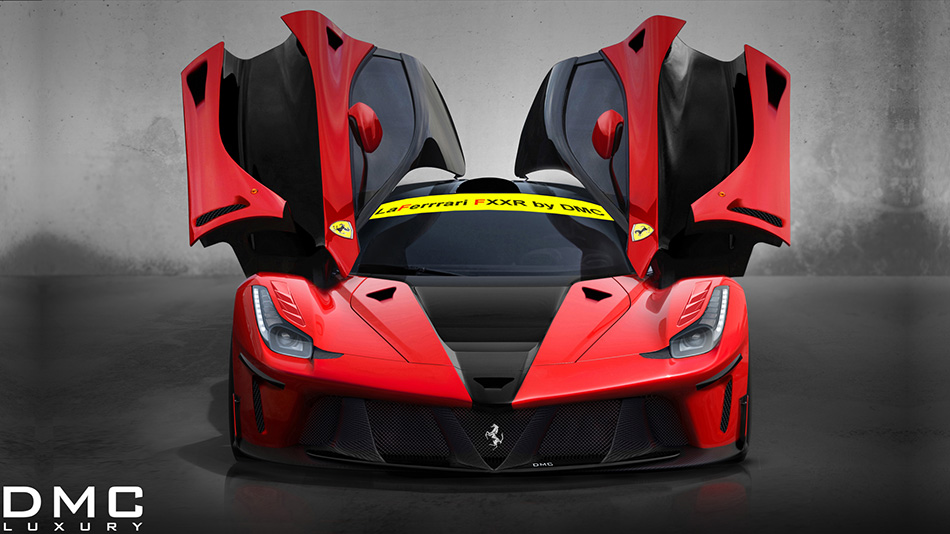 Back in the Sixties you had the beautiful 250 GTO … one was recently sold for $52,000,000 in fact, after that several more ‘specials' have left the factory doors at Maranello like the 288 GTO, the F40 which also had a lightweight LM edition. Later on the Enzo  was turned into the FXX track day car while the 599 GTO evolved into the 599 XX for track use … and then the F70 comes along … called the LaFerrari by the factory, featuring a very innovative design … and upward opening doors tilting forward … remember the McLaren F1 doors?

So how do you improve perfection … easy, you take the Ferrari pedigree of GTO, XX and FXX and translate that onto a bright red LaFerrari … and you end up with a LaFerrari FXXR by DMC, without changing the basic DNA of the car DMC managed to make this Ferrari look a lot more aggressive compared to factory specs while retaining the animal like beauty found on the original.

Up front the color coded vertical center fin in the bumper is gone, so is the lower, horizontal fin in the same color … in come two carbon fiber air intakes angled at a V-shape that extends the line of the large central air vent on the front hood … right in the middle of the lower section the Prancing Horse proudly finds its home. The outer intakes inside this large bumper are angled differently to draw even more air in, naturally the side of the front bumper now features vertical fins to stabilize the LaFerrari FXXR at high speed while an additional intake carved in the sides of this unit help to keep the disc brakes cooled down.

The corners of the front bumper receive clear carbon fiber ‘canards' that increase down force at speed while a smaller air intake is sculpted right in the center of the bumper, joining additional intakes next to the headlights, which remain standard to avoid certification issues keeping this car street legal … if that would be a pre-requisite.

Next to the stylish headlights that run high into the fenders we also have extra vents … you can never have enough cooling on a car like the LaFerrari FXXR by DMC, that is why just in front of the windshield two more intakes are perfectly molded into the hood … which on this car receives black details to get that really mean look when the car pulls up behind you on the highway … I guess one flash of the high beams will be enough to get those slower cars in front of you to move over in fear … increasing the heart rate of the driver you are bound to pass stupendously fast … with a thundering sound being emitted from the race inspired exhaust…

If they are quick enough they will just have enough time to admire the massive, clear carbon fiber rear wing, which is fully adjustable naturally, sitting on top of an almost completely blacked out rear section of the LaFerrari FXXR by DMC. The original red taillights are replaced by smoked, black finished units, just like the new exhaust system that no longer shows bright chrome tips but instead four matte black ‘mouths' breathe fire now … add a clear carbon fiber lower diffuser with a quartet of vertical fins and you know this is a race car at heart … enjoying the open road.

Another detail that tells this lady is capable of very high speeds are the two black winglets mounted high up behind the side windows … these help tremendously to stabilize the LaFerrari FXXR by DMC when the pedal hits the metal … in fact these winglets are angled just right to increase the effect of the larger rear wing even further … in addition to looking good, every wing, vent and outlet has a function on this hyper car.

A roof mounted air intake allows a more important air flow into the engine compartment while a classic yellow banner on the windshield removes any doubt you might have … this is a LaFerrari FXXR by DMC, not your factory original LaFerrari … a quick look at the side only confirms the fact this Ferrari is so much more than when it left Maranello.

The door inset gets a black finish while multiple air intakes and vents get fitted to these amazing, upward opening doors, a quick fuel filler makes it onto the side panel while a nifty air vent finds it place right in the crease of the rear panel … an additional intake to cool the rear brakes looks like it was always meant to be there while the small fin on the side sill just in front of this intake is angled in such a way air is ‘tunneled' onto the inlet … the faster you drive, the more cool air gets pushed onto the brakes … while both for the front and rear brakes large vents make sure the hot air can leave the discs again.

Add the track style, cross spoke wheels, naturally finished in black, to the impressive Rosso bodywork (we are still talking about a Ferrari, so instead of turning to some special shade the DMC FXXR remains red for the most part) and you get an overall feeling of a true Ferrari that has been turned into something even more illustrious.

Some designers would radically change the looks of a super car like this, but if you take a closer look at the LaFerrari FXXR by DMC you will notice a lot of the aggressive styling looks like it is a logical evolution of the Ferrari GTO, XX and FXX onto the current LaFerrari … the Ferrari gene pool is still visible, sure these mockups look different, more intimidating … but still so recognizable as a Ferrari … a high power, race inspired Ferrari perhaps … but still true to the philosophy that turned these cars from Maranello into dreams car for several generations in the past … and in the future.

Initially created as a concept to show what would be possible when DMC turns their attention to a rare LaFerrari … it became obvious during the design stage this might be more than just a virtual render … every part added to the original car to convert it into an FXXR can in fact be made by the skilled DMC fabricators … so will the LaFerrari FXXR remain a dream only viable on a computer screen … or will some of the fortunate owners be able to have DMC turn their already rare car into a highly exclusive hyper car?

Who knows … it sure wouldn't hurt getting in touch with DMC for more details … sometimes dreams can come true you know, all it takes is an avid enthusiast that wants to own a masterpiece like no other.