Taking the new Dodge Challenger R/T Shaker one step further, the Mopar brand revealed its new Mopar '14 Challenger – the rarest limited-production Challenger model announced to date (only 100 to be made), with a distinct "Moparized" look. Additionally, the new Mopar '14 is engineered to take on any combination of the three all-new "Scat Packages."

"The Mopar '14 is yet another factory-engineered example of how Mopar can make even limited-edition muscle cars like the Challenger even more special," said Gorlier. "With three new ‘Scat Packages' and more than 100 proven, quality-tested Mopar performance parts and accessories available for the Dodge Challenger, Mopar makes it simple through its one-stop customization shop."

The Mopar '14 Challenger features Bright White or Gloss Black exterior paint, and in keeping with tradition to its limited-edition predecessors — the Mopar '10 Challenger, Mopar '11 Charger, Mopar '12 300 and Mopar '13 Dart — is highlighted by the "Shaker style" stripe in "Mopar Blue." For an even more customized look, two additional Mopar Blue stripe options are available, including an all-new "rocker panel" bodyside triple stripe runs with "MOPAR" across the doors; or for an even bolder look, an all-new A-line bodyside stripe that wraps over the deck lid and includes the Mopar "Omega M" logo on the rear-quarter. Enthusiasts hungering for a taste of the new Dodge Challenger R/T Shaker's legendary heritage will find satisfaction in the Mopar '14 Challenger. Its all-new Satin Black Shaker hood scoop stands out with its raised profile and "Shaker" logo reverberating while the 5.7-liter HEMI V-8 is running.  Other unique design elements to contrast the Bright White paint include all-new 20 x 8-inch Gloss Black aluminum wheels with Mopar center caps, a unique Black Vapor grille surround, Black fuel-filler door and Gloss Black deck-lid spoiler with Gloss Black "Mopar Design" badge and "Mopar" quarter-glass decals. 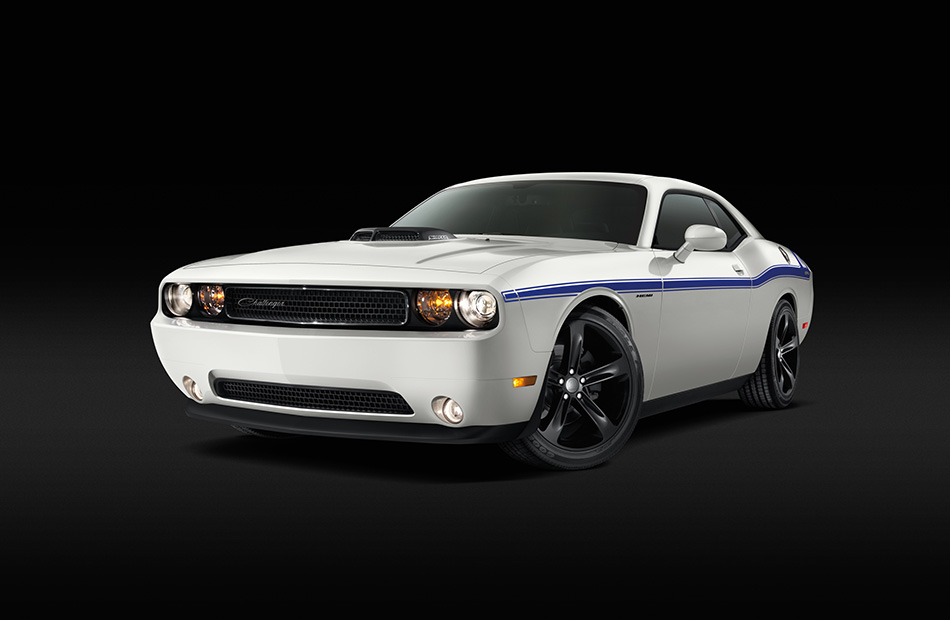 As the Mopar '14 ownership should be as unique as the ride itself, Mopar created a serialized instrument panel plaque, customized monroney label and "Mopar" branded key fobs. The Mopar-designed vehicle tradition continues, as owners of the Mopar ‘14 Challenger will receive a custom-crafted personalized owner's kit with a Mopar '14 brochure, unique Mopar '14 memorabilia, and customized items crafted with the serial number of each vehicle.

The limited-edition Mopar '14 Challenger is the fifth special-edition vehicle created by the Mopar brand, and will arrive straight from the factory in Brampton, Ontario, to dealerships in the second quarter of 2014. Pricing will be announced at a later date. Ordering will begin in March 2014.