The Honda CR-V is a highly-versatile four-door entry crossover SUV with a spacious five-passenger interior, sedan-like handling and ride comfort, and a reputation for offering the highest levels of standard safety features in the segment. The all-new 2007 Honda CR-V injects a dynamic sense of style and refinement, bridging the space between sport and utility better than any CR-V yet - while adding collision compatibility safety enhancements like Honda's exclusive Advanced Compatibility Engineering(TM) (ACE(TM)) Body Structure.

Cloaked with distinctive and dynamic exterior styling, the 2007 CR-V debuts with a wide assortment of new technology and standard comfort and convenience features. The sophisticated interior design delivers near-luxury style along with improved refinement. The highly acclaimed Honda Satellite-Linked Navigation System(TM) with voice recognition and rear view camera is available on the CR-V for the first time. 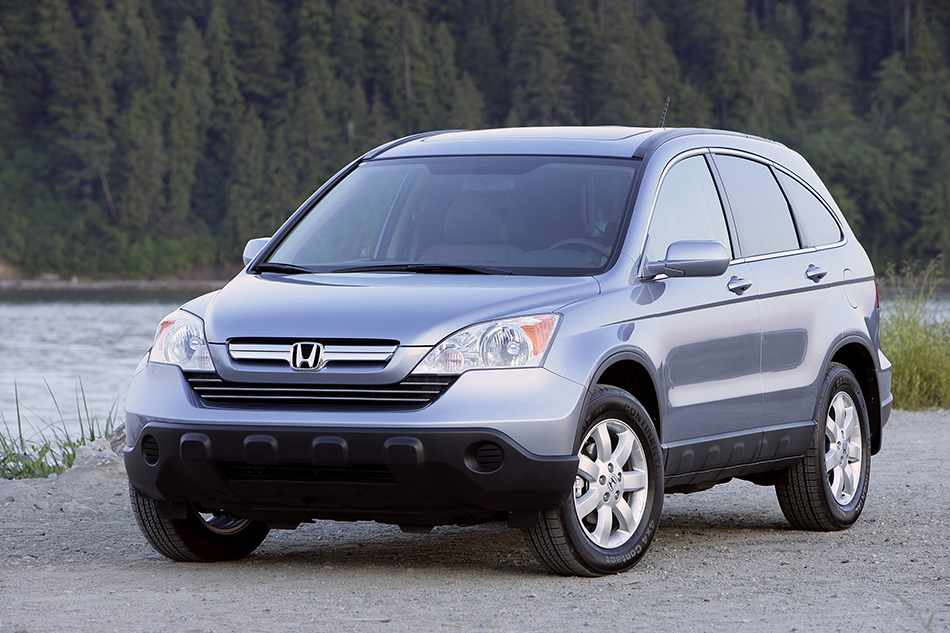 A dynamic and emotional forward cabin blends the familiar CR-V identity into a sculpted lower body with a rugged lower body appearance. A new double grille and a side profile with an arched window shape accent the CR-V's distinctive and upscale presence. Adding to the clean lines, the spare tire now resides under the rear floor as opposed to the exterior of the tailgate; benefiting aesthetics, visibility and garage-ability.

The previous generation CR-V (2002 - 2006) set a new standard for vehicle safety when the 2002 CR-V became one of the first few vehicles ever to earn the federal government's top five-star crash safety rating for both frontal and side impacts. The 2007 CR-V builds on Honda's industry-leading emphasis on safety and outdistances the competition by implementing new technology and features that go beyond conventional industry standards with innovations such as the ACE Body Structure and a pedestrian safety design, just to name two.

The 2007 CR-V has an entirely new body design. The exterior width has increased by 1.4 inches to 71.6 inches while the body length has decreased by 3.1 inches (due mostly to the relocation of the spare tire from the rear bumper to underneath the rear cargo area). The length of the vehicle minus the spare tire remains nearly the same.

Comprised of a front MacPherson strut layout and a rear multi-link suspension, the highly rigid body and independent suspension offer an engaging driving experience rare for this class of vehicle.

The CR-V is available in three trim levels - the well-equipped LX, the fully-featured EX and the upscale EX-L.

The inside of the 2007 CR-V blends Honda's renowned ergonomics and clever storage integration with classy, modern and efficient architecture. More standard features and available new features like a navigation system with voice recognition highlight the dedication to taking the interior to an entirely new level. The increased body width allows the seats to be wider and more supportive, and a newly-designed retractable center tray table not only provides the prerequisite beverage holders, but EX and above models also contain an additional 12V power outlet and auxiliary audio jack. CR-V models outfitted with a leather interior (EX-L) provide a spacious multi-function center console that can accommodate up to 24 compact discs (on models without the navigation system).

On EX and EX-L models, a dual-deck cargo shelf provides additional storage options in the cargo area and can hold up to 20 pounds, while providing enough clearance underneath for grocery bags or items such as a folded stroller. Key interior dimensions remain similar to the generous proportions of the 2006 model.

The latest generation of the Honda Satellite-Linked Navigation System with voice recognition and rearview camera, available on the CR-V EX-L, features a 6.5-inch motorized display that opens and closes for access to the internal single-disc CD player and a digital audio card reader that can play MP3 and WMA files from CompactFlash(R) cards. The navigation system features more than 7 million points of interest and can control the audio system. The voice recognition is capable of recognizing and entering numbers, street names and cities.

For 2007, all audio systems are more powerful with at least 160 watts (LX, EX). Auxiliary audio input jacks are standard equipment on all trim levels, allowing for portable music device playback through the audio system. Each audio system also features MP3/WMA CD playback capability and Speed-sensitive Volume Control (SVC) that automatically adjusts the volume based on vehicle speed. The LX trim level has a four-speaker 160-watt audio system with a single-disc CD player. The EX and EX-L add two speakers (tweeters) and an in-dash 6-disc CD changer (console mounted on navigation-equipped models). XM Satellite Radio is standard on the EX-L. The EX-L with Navigation audio system increases power output to 270 Watts and delivers sound through seven speakers, including a subwoofer.

Powered by Honda's 2.4-liter, Dual-Over Head Cam, i-VTEC 4-cylinder engine, the CR-V offers refined and responsive performance with good fuel economy and low emissions (CARB LEV II ULEV). A 5-speed automatic transmission is standard equipment on all CR-Vs, and a traction-enhancing Real Time 4WD system is available. The engine produces 166 horsepower and 161 lb-ft. of torque - a 10-horsepower increase and a broader torque curve compared to the 2006 CR-V. The power upgrade is attributable to a slight increase in compression ratio and enhanced valvetrain, intake and exhaust tuning. From a refinement standpoint, the Drive-by-Wire (DBW) throttle control works closely with the transmission for extremely smooth shift points and intuitive gear holding on hilly roads.

The fully automatic Real Time 4WD system (available) enhances the CR-V's all-weather capabilities when driving in rain, snow, dirt roads and sandy conditions - without the significant weight, fuel economy and handling performance drawbacks of a conventional four-wheel-drive system. For 2007, enhancements have been made to the system for improved torque transfer to the rear wheels - making the CR-V even better in rain, snow and sand.

The CR-V is truly a global product for Honda sold in 160 countries in North America, Europe, Asia, South America and Africa. In fact, the CR-V is sold in more countries than any other Honda automotive product. Worldwide, cumulative sales are approximately 2.5 million (since 1996) with 1.2 million sold in the United States (since 1997). Worldwide, 334,000 units were sold in 2005 with 150,000 sold in the United States. Worldwide, the CR-V is built in seven countries at eight factories, and for the first time it will be assembled in North America at Honda of America Manufacturing in the East Liberty Plant.