Building on its legacy of bold muscle cars, Ford is introducing a modern, all-American sedan concept that combines "Built Ford Tough" attitude with the sporty elegance of its iconic 1960s sedans.

"This concept celebrates the best of American muscle, showing customers what 'modern muscle' is all about," said Peter Horbury, executive director - Design, The Americas. "The Interceptor concept is much like a Marine in dress uniform. He looks smart and elegant but you can see the raw power that lies beneath." 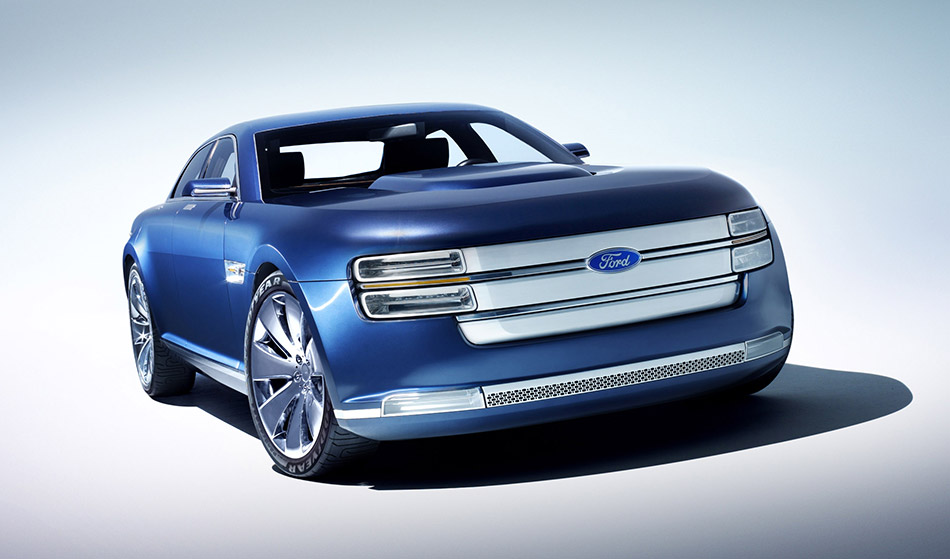 The Ford Interceptor also has a low cabin and higher beltline, adding to the vehicle's attitude and sense of mystery.

"The Ford Interceptor concept is a pure sedan that speaks to performance car lovers everywhere," said Freeman Thomas, director, North American Strategic Design. "These people might need more space, but they still appreciate the power and attitude that cars like this represent,"

Painted a deep blue, the Ford Interceptor concept's strength exudes from its strong, high shoulders. And much like on last year's Ford F-250 Super Chief pickup concept, a single character line runs the length of the body side, slightly sloping downward as it reaches the back of the sedan.

This adds wedge to the car, making it dynamic, without detracting from its smooth, clean design.

Signature Ford touches include the horizontal three-bar grille, which has been structurally integrated into the bumper beam, as well as "squircles" - or professionally square circle-shaped graphics - inside and out.

As a nod to performance purists, the ultimate muscle lies under the powered clamshell "shaker" hood, which caps a thoroughly detailed engine compartment that houses a 5.0-liter V-8 Cammer engine.

This is an upgraded variant of the 4.6-liter engine under the hood of the current production Mustang GT. The Cammer modular engine powered Ford Racing's FR500C race car to the top of the Grand Am Cup's GS class, achieving five victories on its way to the Drivers, Manufacturers and Team Championships in its first season of competition.

Inside, the Ford Interceptor concept is sleek and thoroughly modern, completed in contrasting black leather and metal finishes. 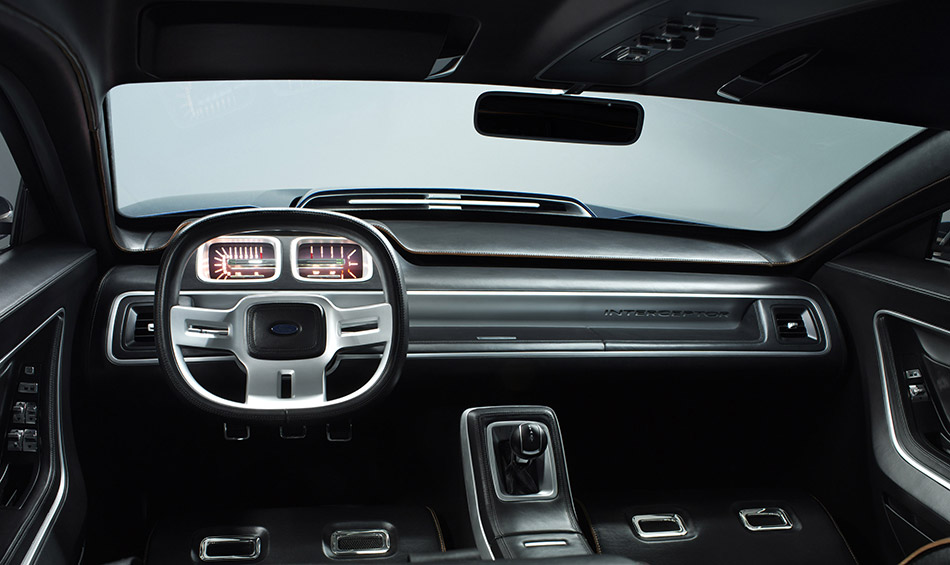 Designed within a pair of squircles, the speedometer and tachometer are eye-catching. The needles for both start at center and move opposite each other as the speed and RPM climb.

Other clever touches include retractable headrests that deploy from the roof when the car is parked. They adjust fore and aft, as well as up and down for each occupant. Audio control panel and climate controls also are stowable.

On the other hand, the gated six-speed shifter is exposed, just waiting to be thrown into gear.

"The Interceptor concept is a sedan - but with the heart and soul of a performance car," Thomas said. "This car is about restraint - and not clouding the driving experience with too much technology. There aren't a lot of layers between the driver and the road with this car."

For safety, the Interceptor concept incorporates Ford's patented four-point "belt and suspenders" safety belt design in all four seats and inflatable seat belts in the rear.

While current three-point safety belts are extremely effective in reducing the risk of injury in a crash, Ford Motor Company is researching these two potential safety belt technologies as possible ways to further reduce injury risk in vehicle crashes.

A number of technical challenges still need to be overcome before such restraint systems could ever be used, but these technologies might one day further enhance safety belt effectiveness.

The four-point belt showcases a possible next-generation safety belt that is more comfortable and easier to use than traditional three-point belts, according to consumer research. Additionally, inflatable belts have been included in the rear seat of the concept to help better protect occupants in a variety of crashes.

"Our customer target for this powerful masculine sedan was a man with a family," Horbury said. "He's essentially a good guy, but a bit mischevious. He loves power and performance. But ultimately, he's responsible. When he has his family on board, he values new safety technology as well as a powerful engine that runs on E-85 ethanol."