Building on 25 years of innovation and sales leadership, a new Explorer is on its way, with even more smart technology, a new 2.3-liter EcoBoost® engine and an all-new Platinum series. The new Ford Explorer goes on sale next summer.

The new Explorer, revealed at the 2014 Los Angeles Auto Show, builds on the strength and leadership of Ford's new vehicle lineup - the freshest in the industry - and provides SUV customers even more versatility, capability, smart technology and efficiency.

"Explorer helped define how the world thinks about SUVs," said Raj Nair, Ford group vice president and chief technical officer, Global Product Development. "Explorer is the centerpiece of Ford's global utility vehicle lineup because it delivers an ideal combination of form and function. And with 7 million already sold, nearly everyone has an Explorer story."

Introduced as a 1991 model, Explorer featured generous interior space customers were looking for, and was engineered specifically for people seeking adventure for their families and a way to express their individuality. For a quarter century, Explorer has been America's best-selling SUV.

Ford Explorer is built in North America at Chicago Assembly Plant, as well as in Venezuela and now, Russia. It is sold in more than 100 markets across the globe. Ford expects to export 56,000 Explorers from the United States this year alone.

"Customers love Explorer, and expect this SUV to lead the way in innovation, performance and fun," said Arie Groeneveld, chief engineer for the new Explorer. "It's a tall order, but we're aiming to build the best SUV in the world." Even more smart technology - that's what customers will get with the new Ford Explorer. It offers more technologies than previous models - features that enhance the driving experience. These include:

These current Explorer features provide a foundation for innovations on the new model:

The 2.3-liter EcoBoost is available on the base, XLT and Limited series. The new powerplant is expected to give customers 12.5 percent more horsepower and 11 percent more torque over the current 2.0-liter EcoBoost engine. It improves highway passing times 10 percent at speeds between 55 mph and 75 mph.

The 2.3-liter EcoBoost will deliver a noticeable improvement in horsepower and torque; while EPA results are not yet certified, no sacrifice in overall fuel efficiency is anticipated. The current Explorer is a gas mileage leader on the highway.

"The new Explorer isn't giving up its reputation as a leader in highway fuel efficiency - especially for the customer who wants a vehicle that is also a capable trail warrior," said Groeneveld. "Customers will not only get the performance of a larger engine, they won't sacrifice efficiency because of it."

Style - the all-new Platinum series further elevates the full-size SUV in look and feel, with changes to both the Explorer exterior and interior.

"Bringing Explorer Platinum to market is a natural extension of the Explorer lineup, giving our customers even more of what they want," said Matt Zuehlk, Ford Explorer brand manager. "There's a market for more upscale SUVs, as 90 percent of today's Explorer Sport buyers purchase the most expensive package available. That's a strong signal customers are ready for Platinum."

"Platinum is the ultimate expression of refinement," said Christopher Svensson, Ford design director, The Americas. "This is the most premium, high-quality interior we've ever offered on a Ford vehicle."

The interior incorporates brushed aluminum and satin-finished ash wood in multi-piece appliqués on all door panels and the instrument panel. The wood-trimmed, leather-wrapped and heated steering wheel includes unique stitching that matches the stitching used throughout the interior.

For the first time in a production Ford vehicle, a brushed aluminum Ford oval is centered on the steering wheel.

The new Explorer Platinum will be the first Ford vehicle to get an all-new 500-watt Sony Audio System with Live Acoustics and Clear Phase technology. Clear Phase eliminates sound dispersion throughout the vehicle, so the music occupants hear is precisely pinpointed, just as the artist intended. Live Acoustics engineering re-creates the sound dynamics of some of the world's greatest concert halls for a more enveloping, realistic sound. 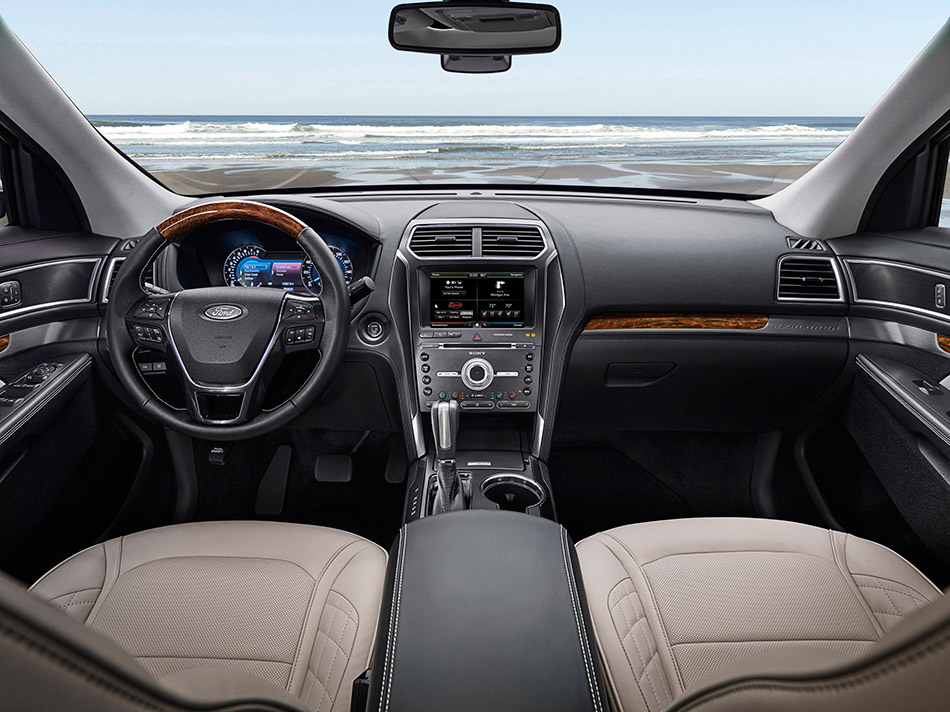 The integrated exhaust is designed to reduce the appearance of soot collecting at the rear of the vehicle. Inside the chrome bezel of the exhaust, engineers designed a shield that catches the soot so it doesn't collect around the outlets.

Intelligent four-wheel drive continuously monitors wheel speed, throttle position and steering wheel angle to determine vehicle conditions and driver intent. The system then determines the optimal amount of front and rear torque for the given conditions to prevent slip from even occurring, which helps keep the vehicle sure-footed on virtually any terrain. In sand, grass or gravel mode, the antilock braking system changes its pulse rate, which allows material to build up in front of the wheels, acting as a doorstop of sorts to help slow momentum.

To help maintain efficiency, in most steady-state cruising conditions the new Explorer equipped with intelligent four-wheel drive seamlessly and quickly transfers torque between the front and rear wheels.

A newly refined, intelligent four-wheel-drive gauge display shows power being distributed to front and rear wheels under all conditions - from heavy four-wheel-drive system usage to when the system is not transmitting power at all - for improved efficiency.

For added convenience, the Terrain Management System automatically defaults to normal mode whenever the vehicle is started to ensure it is ready for normal driving conditions.

Using a dial located on the center console, the customer can shift on the fly, selecting one of four terrain management modes - normal, snow, sand or mud - to set how the engine, transmission, brakes and four-wheel-drive system will operate. A fifth setting is for navigating hills.

The new Explorer benefits from an improved suspension for better handling and a quiet cabin, enabling a comfortable ride even when the pavement turns to dirt.

Explorer also features a tower brace that provides additional stiffness between strut towers. The tower brace for Explorer equipped with four-wheel drive is three millimeters thicker for even more stiffness - providing better control and a smoother ride on rugged terrain.

The new Explorer, with standard 18-inch and available 20-inch wheels, offers new tire options for improved ride and handling, while reducing road noise in the cabin.

Interior changes help enhance quietness in the cabin. There are new door seals, and an enhanced sound package includes engine subframe mounts specially tuned to reduce vibration, as well as a specially tuned exhaust for the 2.3-liter EcoBoost engine. Acoustic glass is used on the windshield and front doors on XLT and higher trim levels.

Rugged - that's the word that inspired the designers creating the look of the new Ford Explorer.

Exterior style updates - such as positioning the grille and LED headlamps even higher, adding a new closed-off lower roof rack with channels that cascade rainwater off the vehicle and a new rear spoiler - also improve aerodynamics.

Visible heat-sink structures for cooling the LED headlamps are a meaningful detail. These radiator-like grilles are typically hidden behind the light cluster, but on Explorer they are part of a complex headlamp design that puts innovation on display.

The new Explorer features five trim series. These are: