Whether it's shock, awe or envy, the Volvo C30 "SC" concept by International Product Development (IPD) elicits raw emotion – like a Vegas skydiving wedding. In this case it's a marriage of a street-smart Swedish-bred sport compact united with a versatile globally recognized Volvo tuner. The result is a match made in heaven: A head-turning, jaw-dropping, show car ready to capture the hearts and minds of all that embrace it.

This highly modified C30 was built for an enthusiast with a passion for the ultimate show-stopping, technology-laden performance machine. Instead of ordinary, every facet is extraordinary – inside, outside and under the hood. A drive around the block turns into an event. Car power equals star power on the show circuit. The more electronics the better on this ride. Self-expressive, one-of-a-kind magnetism sends the senses soaring for the clouds.

The IPD C30 doesn't fly – but it looks like it could take wing. Fully articulating gull-wing doors generate double and triple takes. This exquisite feat of engineering catapults IPD's show car into the league of ultra-exotic, mega-buck masterpieces. The wild front-end treatment, widened fender flares and rear diffuser is frosting on an already tasty wedding cake. A Swedish flag-theme paint scheme in Brilliant Blue and Sun Yellow pays homage to the Land of the Midnight Sun. 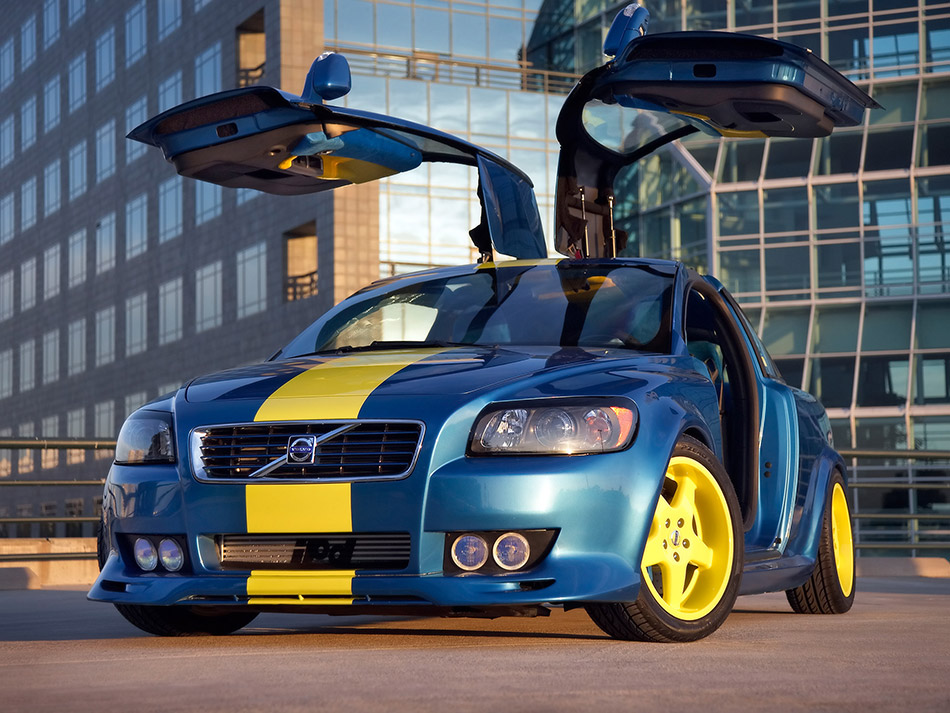 But IPD didn't stop there. The C30's cockpit is trimmed with several yards of Vibrant Blue and Screaming Yellow Alcantra ultra suede adorning the seats and dash. Volvo's signature slim center control panel has been extended, flowing all the way to the base of the windshield. And the C30's sound system has been morphed into a mobile entertainment and information nerve center that's out of this world.

Built around Alpine's V-HUB Pro system that allows for factory integration of serious aftermarket hardware. The user interface is an 8-inch LCD Alpine touch screen that provides a safe and intuitive way to manage all the sources available to the driver. The system employs Alpine's latest digital amplifiers and component level speakers for sonic clarity that brings tears to the eyes faster than a Vegas honeymoon. Key features include a DVD/CD/MP3 player, Alpine's full speed iPOD™ integration, Sirius Satellite Radio with "Live Traffic" and Alpine touch-screen navigation with voice control.

All show and no go simply doesn't cut it in this exclusive neighborhood. So the IPD C30 is bristling with the latest in aftermarket performance and handling upgrades. Under the hood, K&N's latest Typhoon air intake system feeds a KKK turbo with compressor upgrade and a Swedish built Lysholm supercharger. The primary function of the supercharger in combination with the turbo is to provide "big block" performance from a small displacement powerplant. In stock form, the Euro C30's 2.5-liter turbo engine puts out a respectable 218 horses at 5,000 rpm and 236 lb.-ft. of torque at 1,500 rpm. With IPD's enhancements, output is estimated at a whopping 384 ponies at 7,200 rpm and a mind-bending 408 lb.-ft. of torque at a low 2,200 rpm. The gearbox of choice for this application is Volvo's slick-shifting 6-speed manual.

Spent exhaust gases find an easy exit through the IPD 3-inch stainless down pipe with Race Kat and custom exhaust terminated with twin titanium racing mufflers. All the action is managed by a custom software tune from IPD's Swedish partners at MTE. Got boost? You bet! The supercharger provides a 6-psi boost from just 2,000-rpm producing a strong kick that builds smoothly and climbs way beyond the point where the turbo takes over. Getting to the wedding on time is no problem with this ride.

The fully adjustable KW coil-over suspension provides 2 inches of ride height adjustment and 12-way rebound damping adjustment allowing a wide range of setup options for varying conditions. A rear anti-sway bar from IPD enhances the C30's crisp handling balance with just a bit more oversteer on tap for extra fun in the twisties and on the track.

Stopping the action is made easier via an enhanced braking system. Up front are jumbo-size 13-inch rotors with IPD's exclusive cross-dimpled pattern giving enthusiasts the look they desire while eliminating the potential for rotor cracking. The massive calipers improve rigidity and brake feel for superior modulation.

Eligible bachelors and bachelorettes take note: The IPD C30 is based on a European spec version of Volvo's new sport compact. This exciting addition to the Volvo lineup made its world debut at the 2006 Paris Motor Show. As a new segment entry for Volvo, the C30 is expected to reach the U.S. market during the 2008 model year.