Holden has redefined its popular SS V Redline performance hero with the introduction of the acclaimed 2014 VF Commodore.

And for the first time, the new VF Redline offers advanced technology features designed to appeal to the enthusiast driver looking for luxury performance during everyday driving and track-capable characteristics for club events at the weekend.

The new SS V Redline is also more luxurious and refined resulting from key VF program targets, including noise reduction, to deliver the most refined Commodore ever produced.

FEATURES FOR THE TRACK A new staggered wheel and tyre package, with Ultra High Performance 245/40 R19 front tyres and 275/35 R19 tyres at the rear - the widest wheels and tyres ever fitted to a mainstream Holden - provides additional grip for the ultimate performance experience, while all models equipped with manual transmission gain Launch Control, a feature calibrated to improve take off performance when Competitive Mode is selected.

"Early on, it was clear we wanted to create greater differentiation between our performance range and our luxury cars with Redline taking up a new role as Holden's ultimate definition of performance," he said.

"As an engineering team, we gained some valuable learnings about maximising rear wheel drive performance from our work on the Chevrolet Camaro program, and applied this knowledge to Redline.

"We wanted to make Redline more edgy; more of a sports car, and we did this by engineering the perfect balance of go, stop and turn characteristics.

"With VF, everything began with the tyres. For the first time, we adopted a dual width tyre arrangement to acheive much higher ultimate grip levels to deliver better traction out of corners.

"The new VF Redline is the evolutionary step over VE that's pushed the boundaries of Holden rear-wheel drive performance - it's the ultimate driver's car from Holden."

Holden has retuned its FE3 suspension system - unique to SS V Redline models - for even better track capable performance. Among the key changes to the Redline chassis are significant reductions to overall weight through the use of aluminium components and new Electric Power Steering.

Holden has fitted larger front and rear stabiliser bars to enable significant reduction in roll angle, while the new EPS system is tuned for a sharper response with faster on centre steering ratio and speed variable steering efforts. The default Sport steering calibration is optimised for increased vehicle feedback, while steering is more sensitive when Competitive Mode is selected.

FEATURES FOR THE ROAD

Holden Marketing Manager Kristian Aquilina said the Holden team set out to give Redline customers more performance and more refinement than ever before.

"Redline was always going to play an important role in the new VF line-up, and from the outset we carefully considered what it would take to make the new VF SS V Redline the ultimate sports machine from Holden," he said.

"Pricing is also significantly sharper and we've made sure customers get a lot for their Redline by reducing recommended prices by $6,300. The new VF SS V Redline sedan is priced at $51,490 with a manual gearbox and $53,490 with automatic transmission, while Sportwagon is $55,490 and Ute starts from $48,990 for the manual.

"So far we've had a great response to VF Commodore, and we've seen Redline make up a large proportion of SS V sales after just a short time on the market.

"We've also seen some great exposure from our online campaign that put the Redline Ute through its paces at the toughest racetrack on the planet - the Nürburgring.

"We've got a fantastic performance car with Redline and we've now got a new lap record of 8m 19.47sec at the world-famous Nürburgring to prove it."

A 220 Watt Bose® audio system - standard on Redline sedan - employs nine speakers, including sub-woofers, to produce a pure, neutral tone balance from one end of the sonic spectrum to the other.

Head-Up Display projects important cluster information on the windscreen, allowing the driver to view it without looking away from the road.

The transparent, coloured display features four screens, selectable by the driver, which show such information as digital speedometer, tachometer, infotainment and turn by turn navigation.

HUD uses a series of mirrors to display the information on a specific high-technology windscreen. The HUD-enabled windscreen incorporates wedge lamination to provide excellent optic focus for the delivery of clear, sharp images.

Head-Up Display is based on technology originally developed in the US for military fighter jets. It enabled pilots to view vital information with the head positioned 'up' and looking forward, instead of looking down at lower instrument readouts. 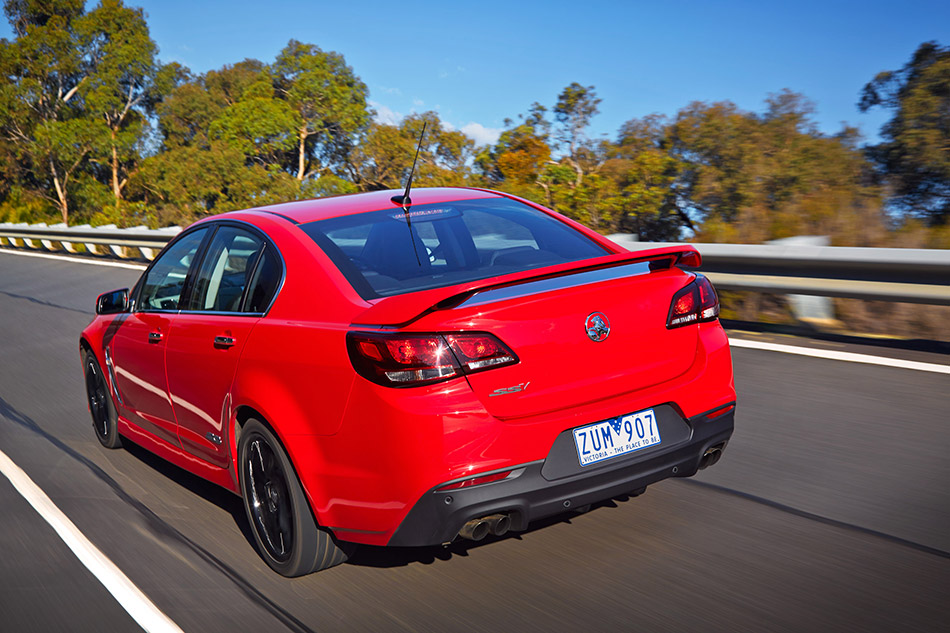 Information displayed by HUD can be selected to display combinations of the following features:

This advanced and all-new active safety system is standard on Calais V and SS V models, including Redline. It employs a digital camera to help drivers avoid front-end collisions.

Like Lane Departure Warning, FCA is designed to help minimise the risk of collisions commonly caused by driver error, distraction and drowsiness.

The system looks for vehicles ahead and uses the vehicle's Head-Up Display (HUD) to warn drivers if they are approaching another vehicle too rapidly and a collision appears to be imminent.

If the HUD function is turned off, the collision warning system will override this setting.

A digital camera is mounted on the windscreen ahead of the rear view mirror helps to combat driver error, distraction and drowsiness by providing lane departure warnings.

This practical active safety feature helps to reduce the risk of collision that arise when drivers stray over lane markings unintentionally, or depart a lane without signalling first.

The Lane Departure System is activated by a control on the steering wheel. It may be deactivated by the driver, according to preference and circumstance.

This technology utilises the same set of radar sensors that operate the Side Blind Zone Alert feature.

It warns the driver of vehicles approaching behind the vehicle when reversing out of a parking space (including angled parking) or a driveway. Reverse Traffic Alert senses moving cross traffic - up to 25 metres away - that may not be visible to the driver.

The driver is alerted via warning chimes from a speaker on the affected side of the vehicle and by a warning symbol and red directional arrow displayed on the centre stack rear vision camera screen.

This clever collision-avoidance technology operates via radar sensors located on both sides of the vehicle's rear fascia/bumper.

The system's first purpose is to caution drivers when a vehicle enters a specified 'blind spot' zone in an adjacent lane. The second imperative is to alert drivers to the danger if an attempt is made to change lanes.

The system 'looks' for other vehicles in both rear side blind spots and alerts the driver to their presence via cautionary visual alert in outside rear view mirrors, depending on which side the object is detected.

If the driver indicates to move into that blind zone, the visual alert in the left or right side external mirror will flash.

This super-convenient 'keyless' feature allows drivers to unlock, start and lock the car simply by carrying the sensor key with them.

On approach, integrated antennas in the vehicle body identify a radio pulse generated by the key fob. When the button on the door handle is pressed, the door will automatically unlock to allow access.

A remote vehicle start feature is available on all VF models with automatic transmission.

It seamlessly integrates with anti-theft and passive entry systems.

Smart Remote Start operates via key fob activation from as far away as 100 metres.

It not only starts the vehicle but also activates the heating, ventilation and air conditioning system, which will operate at the 'last known' fan and temperature setting.

Remote Start will also activate the heated front seats feature, providing that inside vehicle and outside temperatures are below a certain threshold.