They used to be considered a secret tip: powerful Muscle-Cars from the USA, driven by high-performance V8-engines with more than 400 HP at insanely low prices. Today, the former secret has become a true scene. Corvette, Camaro and Mustang are now running at eye level with Porsche and friends. The processing quality has improved, chassis technology has turned more modern and even the high-performance engines are much more drivable than they used to be. One thing has stayed the same: they are comparatively low-priced!

DD Customs from the Hanseatic City of Hamburg were very happy when a customer brought them his 2010 Chevrolet Camaro SS with a few conversion requests. He wanted more power and an optimised undercarriage for better transverse dynamics. They set to work: DD Customs gave the Camaro a KW version 1 undercarriage that clearly lowers the car and improves grip. At the same time, the tuner decided to install the rather rare Drewske wheel rim of type STC-10 in the 22-inch format. Matching the outer colour of the US-Boys, the wheel rims were customised with a black bed and the spoke surface painted red. In a gigantic 9x22 inch with 265/30R22 at the front and 11x22 inch with 305/25R22 at the drive axle, this wheel/tyre combination perfectly fills the wheel houses. 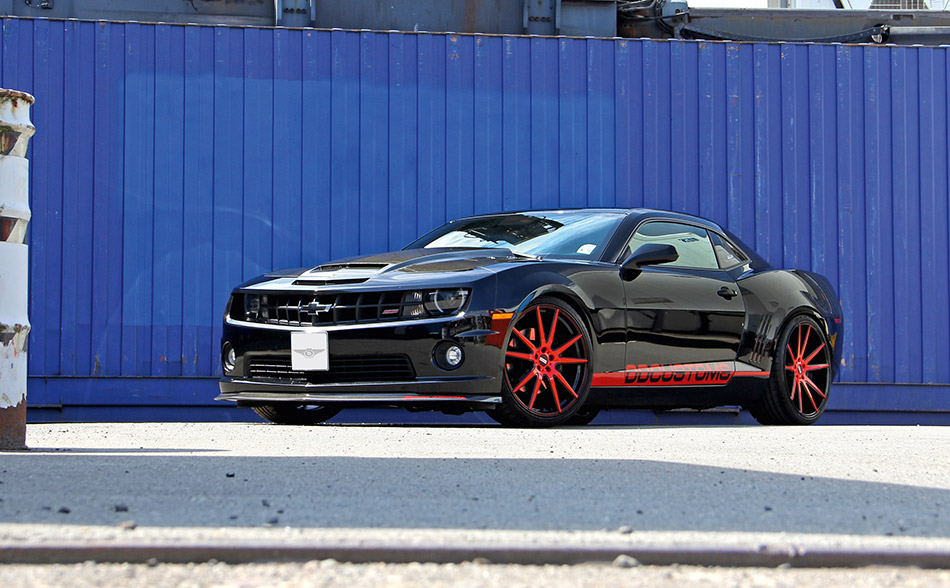 The V8-block's lungs weren't exactly weak ex works either. The customer wanted to improve the output anyway. Therefore, DD Customs gave the classic eight-cylinder a K&N air filter system, a 2-inch fan manifold, two 200-cell race catalysers and a flap-controlled exhaust system with four 115 millimetres thick end pipes. All in all, these changes in the end led to a total output of 474 PS measured on the test bench and a maximum torque of 609 Nm. DD Customs did grandiose work in the development of the special exhaust system. With open flaps, the V8 screams loudly enough to freeze the blood in any passer-by's veins. It's incredibly hot!

The changes to the outer skin of the muscle car were made in-house as well. To improve output on the front axle, the Hamburg company developed a front spoiler lip of carbon fibre that is simply attached below the serial bumper. The carbon cowl, also produced in-house, is a perfect eye catcher, making the car a lot more unique. DD Customs integrated an in-house carbon rear diffuser into the car's tail, perfectly framing the four gigantic exhaust end tubes of the flap unit.

The result: DD Customs ruthlessly optimised the basis of the Chevrolet Camaro SS that was already quite formidable ex works. Much more output, 22-inch aluminium wheel rims and an incredibly loud exhaust system. This Camaro surely will cause goosebumps in any fan of US muscle cars!