The goal of the project was to prove hybrid cars can be exciting to drive, by producing Civic Type R-like performance from the hybrid coupe while remaining sympathetic to the original Honda direction for the CR-Z.

"We wanted a car that has genuine performance available at the touch of a button, but can perform just like a standard CR-Z and offer good fuel economy when the driver wishes," says Colin Whittamore from Mugen Euro. "For that reason we've kept the three driving modes, so the driver can select 'eco' or 'normal' to switch to economy and low emissions for the daily drive, but press the Mugen button for the full-blown 'weekend warrior' settings!"

The car retains both the Honda IMA electric motor and the original 1.5-litre i-VTEC petrol engine, which has been rebuilt to Mugen specification with bespoke upgraded and strengthened internal components.

"When we first approached this programme, we considered what to do with the Honda IMA system, and the answer was immediate and obvious - utilise it and build on it," explains Whittamore. 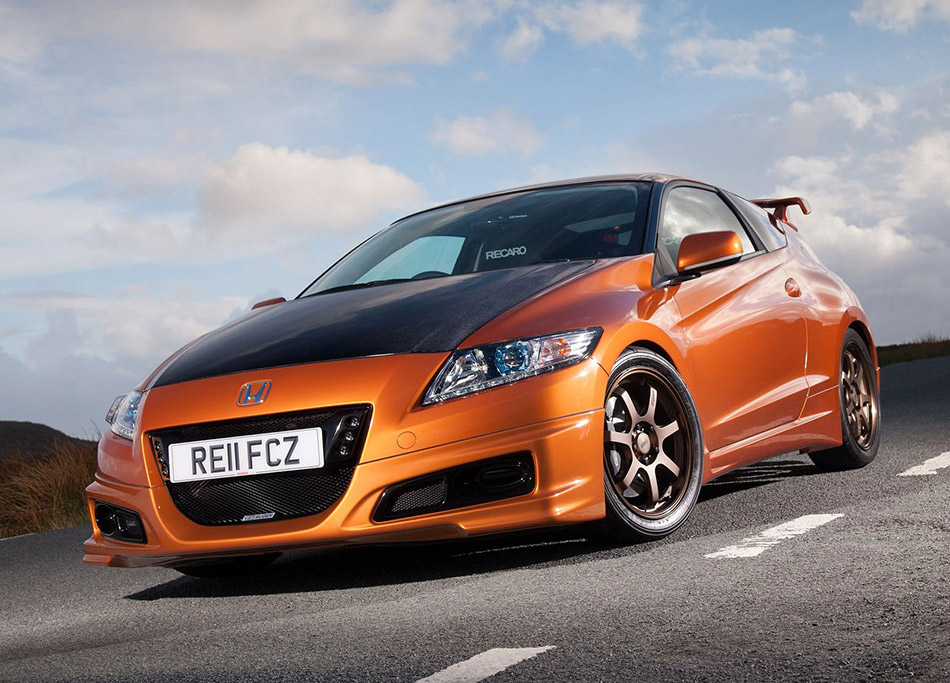 The addition of centrifugal forced-induction under the bonnet helps the Honda CR-Z Mugen deliver over 50 percent more power and torque from the Honda's petrol-electric drive train.

In order to give a fully integrated and smooth power delivery, Mugen Euro has developed the Mugen iCF system, the Mugen acronym for Integrated Centrifugal Forced-induction, which allows all the elements of the electro-mechanical system, including the forced-induction system, IMA motor and petrol engine, to work in harmony.

"The idea was to use the significant advantage of the early torque provided by the Honda IMA electric motor, then increase the torque available from the engine progressively," says Whittamore.

The iCF, along with an electronics upgrade, allowed Mugen to very neatly map the IMA to the extra power and torque of the engine, giving a smooth, integrated and powerful driving experience.

"I have to say that when any of us have jumped into the Honda CR-Z Mugen it has delighted us all," says Whittamore. "It's exactly what we were looking for. And the real beauty is that it can still be driven in the way customers of the standard CR-Z would recognise."

The Honda CR-Z Mugen needed to be visually different enough to attract attention, yet subtle enough to be aesthetically pleasing. Mugen also wanted to demonstrate the high quality of its parts, offering a solution that enhances and integrates with the original CR-Z styling, in line with the Mugen philosophy of custom parts with original manufacturer standards of quality and fitment.

Additions to the exterior of the car include Mugen front and rear under spoilers, side skirts, rear wing and 17-inch lightweight forged alloy Mugen GP wheels. Carbon fibre bonnet and doors not only reduce the overall weight of the car but enhance the sporty look, while the eye-catching Brilliant Orange Metallic paint provides the finishing touch.

The interior of the car continues the sporty theme, with lightweight Recaro sport seats and Mugen accessories, including a weighted gear knob and carbon rear view mirror cover. The assist meters display and record water and oil temperatures and oil pressure. These dials are able to display these in finer detail than the OEM read-outs and allow the driver to more easily see sudden changes or fluctuations under hard driving conditions. They can also be used to warn the driver if any of the values fall outside the customisable pre-set parameters.

How is the increase in power achieved?

Mugen took advantage of the torque given by the electric motor at low rpm and built on that, boosting induction using a supercharger to provide torque after the electric motor peaked, resulting in a flatter and longer torque curve. This means that more torque is available throughout the rev range.

Although the electric motor contributes less than 20 PS to the overall power, it does this almost instantly by generating its maximum torque between 1,000 and 1,500 rpm. However, where in the standard car this causes the peak torque to occur at less than 25 percent of the engine range, with the Mugen iCF the performance does not drop off at this point - as the power/torque graph for the 'stage 1' engine shows.

Early tests with a prototype car based on a standard CR-Z and a mid-tune engine have given 0-62mph times around that of the Civic Type R's official time of 6.6 seconds. With up to a further 15 percent increase in power to come over this 'stage 1' engine and with approximately 50kg reduced from the chassis, overall performance is on course to meet Mugen's original Type R targets.

How does the Honda CR-Z Mugen differ from the standard Honda CR-Z?

Mugen stripped and rebuilt the engine to enhance durability and reliability under increased loads and added supercharged forced induction to provide more horsepower and a flatter ascending torque curve.

As well as improvements under the bonnet, Mugen has used its extensive motorsport and Honda tuning experience to further develop the chassis dynamics, with 5-step adjustable dampers fitted front and rear, and an increase in track width. A sports exhaust has been added to aid engine breathing, and chassis weight has been reduced to assist handling and acceleration/ deceleration. The suspension also improves the control of body roll, while 17-inch lightweight forged alloy Mugen GP wheels allow the use of larger tyres without any unnecessary increase in unsprung weight, to promote better traction and response and to maximise the benefit offered by the limited slip differential that has been added. Bigger brake discs and 4-pot monobloc callipers help stop this powerful car.

Complementing the increased power is the addition of a Mugen body kit including bumper under-skirts, front grille, side skirts and rear wing along with a carbon fibre bonnet and doors to give the car a fierce appearance which matches its powerful credentials.

How much lighter is the car than the standard CR-Z?

The Honda CR-Z Mugen is 50kg lighter than the standard model which, when coupled with the power uplift, gives the car an impressive power to weight ratio approaching 5.4:1.

This has been achieved by using full dry carbon fibre bonnet and doors, which reduce weight considerably, as does the replacement of the front seats with lightweight racing versions, and the removal of the rear passenger seats.

Some components actually add to the weight of the car but earn their place in the specification with their enhanced capabilities. The front brake callipers are a good example. As 4-piston callipers they offer superb stopping power with minimum brake fade even after extended heavy use, and being made completely in one piece, the installation is extremely rigid, ensuring consistent contact between the disc and the pad.

What are the changes to the suspension?

Mugen has developed the suspension in two different directions:

Can I buy one?

The Honda CR-Z Mugen is purely a concept car at this stage, designed to demonstrate the potential and versatility of the Honda IMA system, with no confirmed plans for further production. Mugen and Honda (UK) will consider media and customer feedback before deciding on any next steps.

How much is this car worth?

Excluding many of the design and development costs, the materials and labour costs for this one-off 'halo' prototype put its value in excess of £150,000. However, if a limited run of cars, with a specification based on this concept, went into production, the price would be totally dependent on final specification, volume and frequency.

Can I buy any of the parts to add to my own CR-Z?

There are parts fitted to the Honda CR-Z Mugen which you can purchase through the Honda UK Mugen authorised dealer network.