The Sonic Orange concept is complemented by a Ballistic Black carbon fiber hood, roof and ground effects for reduced weight. Strong hints of the production version are highlighted in its "Z" bodylines and powerful curves. When the production sports coupe arrives, it likely will be the most affordable 300+ horsepower car on the market, and the most dynamic performance car yet from Hyundai. 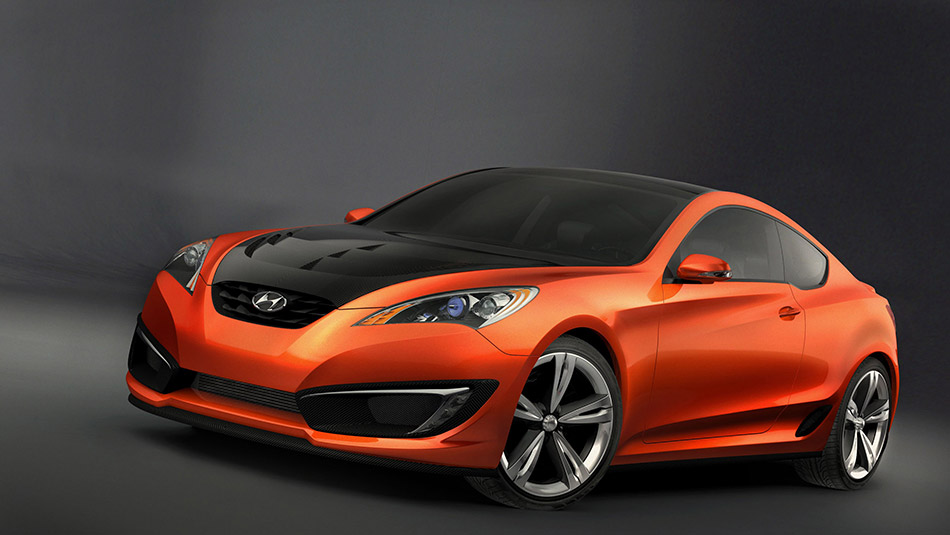 "The mission for Concept Genesis Coupe was to create a pure performance car with a design that would capture the imagination of hardcore automotive enthusiasts," said Joel Piaskowski, chief designer at the Hyundai Design Center in Irvine, Calif. "With its aggressive look from just about any angle, I think we have been able to do that."

"Beauty and danger co-exist in the design of the Concept Genesis Coupe," said Eric Stoddard, senior creative designer. "When viewed from a distance, the car is beautiful to look at. But up close it can appear a bit menacing and even a little intimidating."

The concept's rocker panels are drawn close to the ground making the bodysides extra thick and the daylight opening extremely thin, allowing the wheels to be slammed up into bulging fenders. To complete the aggressive sports car look, the depth between the fenders and the greenhouse has been maximized.

Three large heat extractors sculpted into the hood are designed to cool just about any powerful engine. When the concept becomes reality, three large openings in the front fascia will allow for better engine breathing. The dual exhaust tips integrated into the rear fascia repeat the design theme of the front cooling ducts and are surrounded by a large carbon fiber air diffuser.