The 2003 Infiniti G35 Sport Coupe, 2003 Motor Trend Car of the Year, went on sale November 2002 at 162 Infiniti dealers nationwide. It joins the class-leading four-door G35 Sport Sedan as a potent one-two punch in the growing mid-size sports performance segment. Created with racing-inspired technology, both G35 models utilize the same rear-wheel drive, driver-oriented platform, with the new G35 Sport Coupe turning up the performance levels even higher and draping it under a sensuous two-door body.

"The G35 Sport Coupe is a car that moves Infiniti forward into new territory," said Mark McNabb, vice president and general manager, Infiniti Division. "It has the same combination of high performance, rear-wheel drive and luxury amenities of our flagship Q45 and G35 sedans and adds that extra measure of emotion and excitement that comes with sports car styling and packaging." 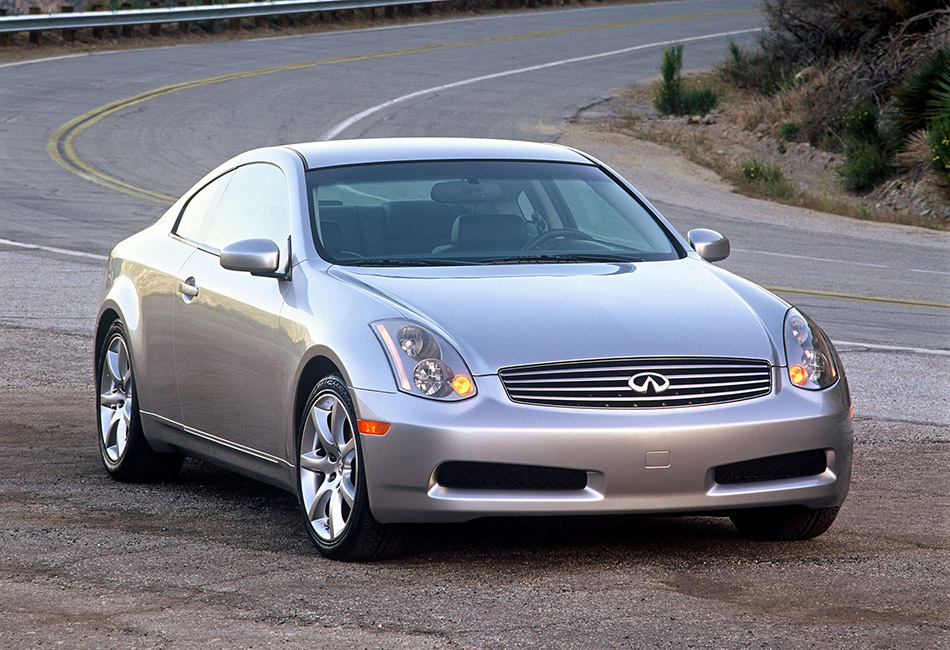 The G35 Sport Coupe features the innovative FM (for front mid-ship) platform, which positions the engine behind the front axle. This results in an optimized front-to-rear weight balance of 53:47, which factors in weight transfer during key handling maneuvers, such as entering and exiting corners. The FM platform also positions its large diameter wheels and tires out near the corners of the vehicle, providing an extra measure of handling stability.

"Kazutoshi Mizuno, the G35 Sport Coupe's Chief Vehicle Engineer, began development of the basic platform concept in 1995, after heading Nissan's LeMans and Group C racing programs," said McNabb. "This combination of racing experience and extensive development work has created an exceptionally refined package right out of the box for both the G35 sedan and coupe."

Sporty and Sleek Inside and Out

"The G35 Sport Coupe is pure Infiniti in terms of its clean, progressive styling," said McNabb. "We also believe it's one of the best looking vehicles on the road – sport coupe, sports car, any category."

The 4-passenger interior of the G35 Sport Coupe is equally attractive, combining a driver-oriented cockpit with an Infiniti level of luxury and design detail. The standard sport-contoured front bucket seats are 10-way (6-way power) adjustable for the driver and 4-way (2-way power) adjustable for the passenger. The seats offer side panel control switches and are available with ultra-soft leather, manufactured exclusively for Infiniti G35.

Like the G35 Sport Sedan, the G35 Sport Coupe's FM platform is designed to help protect occupants from strong impacts and large vehicle body deformation in a collision by efficiently absorbing crash energy. Front-end collisions include full frontal impacts, in which a crushable body construction is needed to reduce the deceleration g-force of the cabin.

In a high-speed frontal collision, for example, the crushable zone crumples while the engine moves as if to drop under the floor. This has the effect of expanding the crushable zone, thereby reducing deceleration g-force and simultaneously helping minimize cabin deformation, especially in the leg area.

"The G35 Sport Sedan has experienced outstanding reviews and strong sales, worthy of its segment leading performance, packaging and style," said McNabb. "The G35 Sport Coupe builds on that momentum, powering Infiniti to the same leadership position in the sport coupe class."