The Infiniti M45 Concept, which made its world debut at the New York International Auto Show, offers a unique, advanced look into the future design and technology direction of Infiniti. The M45 Concept captures the essence of both the current M45 performance sport sedan and the award-winning Infiniti G35 – and takes both to a new level of engaging luxury and performance.

"The M45 Concept is an expression of power, refinement, technology and style – all the things that make Infiniti owners' hearts pound," said Mark Igo, vice president and general manager, Infiniti Division. "We have captured the soul of the Infiniti brand, expressing it in unique, forward thinking ways in the M45 Concept – most of which will appear in the new 2006 M45, which is scheduled to arrive in spring 2005." 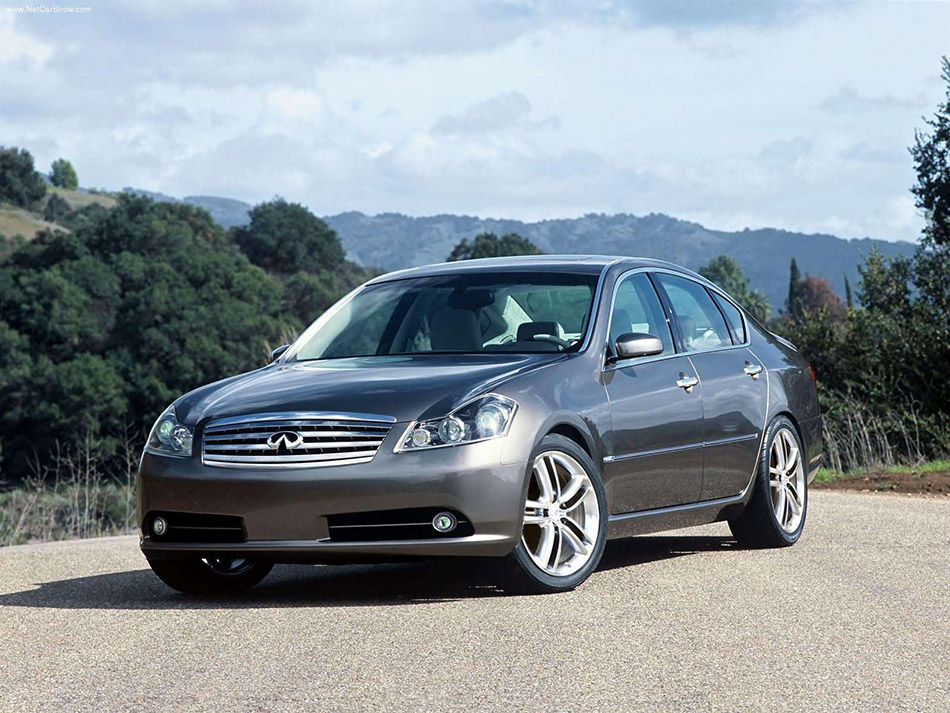 The M45 Concept features a powerful 340-horsepower 4.5-liter V8, taken from the flagship Infiniti Q45, along with a new generation of the FM (Front Mid-ship) platform currently used on the G35 sedan, G35 coupe and FX premium crossover SUV. Approximately 60 percent of the platform design and components have been enhanced for use with the M45 Concept.

The new, redefined platform is designed to accommodate the M45 Concept's 4.5-liter V8 engine or a 3.5-liter V6, continuing to position the engine behind the front axle. As in current applications, this positioning results in an optimized front-to-rear weight balance, which factors in weight transfer during key handling maneuvers. Also like the production FM platform, the M45 Concept's large diameter wheels and tires are positioned out near the corners of the vehicle, providing an extra measure of handling stability and driving excitement. The M45 Concept's suspension is an independent double-wishbone design in front and multi-link independent in the rear.

From a design standpoint, the M45 Concept optimizes both luxury and sport styling to create a dynamic visual sensation. The expressive, jewel-like grille and crystal-look headlight clusters offer a luxurious appeal, while large 19-inch wheels and high performance tires, a stable posture with wide tread, and short overhangs contribute to the sportiness of the design.

The M45 Concept also offers a low, aggressive hoodline, which flows into the anchored shoulders and contributes to the sporty, powerful silhouette. The roofline is fluid, while the hood and front fenders are sculpted to provide a solid, muscular look. In the rear, L-shaped LED taillights and quad-tipped tailpipes finish out the exterior design.

At the heart of the M45 Concept is the high-performance power of an advanced 4.5-liter, 340-horsepower DOHC V8, mated to a 5-speed automatic transmission with a short-throw performance shifter with manual shift mode. The M45 Concept's advanced braking system is designed to offer a confidence-inspiring brake pedal feel and enhanced pedal response, while the steering system is designed to enhance the engaging driving experience through a high-flow hydraulic boost system and micro-polished steering gear and robust rack mounting. The M45 Concept also features Vehicle Dynamic Control (VDC).

The handling and stability of the Infiniti M45 Concept is greatly enhanced by a new active rear control system. Unlike passive rear steering systems, this design features motor-driver rear-wheel control. This system helps improve the M45's handling performance by adjusting the geometry of the rear suspension according to steering input and vehicle speed.

The system's electronic control unit calculates the desired vehicle dynamics from a series of sensors, including vehicle speed and steering angle, and directs the system actuator to change rear geometry by moving both rear suspension lower links. The result is sports car-like agility, combined with luxury sedan stability.

Like the M45 Concept's performance, its interior design engages the senses in new and invigorating ways. It combines a driver-oriented cockpit with a graceful, Infiniti level of luxury and design detail.

"The interior of the M45 Concept provides a ‘hand in-glove fit.' It is the most indulgent, high-quality design that Infiniti has ever offered – one that indicates a new wave of Infiniti interior design," said Igo. "It reflects a more passionate interior direction, which is already starting to appear in production Infiniti vehicles."

"This is, without a doubt, the finest audio system ever created for an Infiniti vehicle, with sound performance every bit the equal of the car's driving performance," said Igo.

The interior also offers an array of driver and passenger-oriented technology features, many of which are found in today's Infiniti production vehicles, including the Infiniti Intelligent Key system with push button start. This system eliminates the need to take the key fob out of your pocket when locking, unlocking and starting the engine. Other features include an Infiniti Navigation System with a new user interface featuring voice-activated destination entry, HVAC/audio and Bluetooth wireless connectivity, RearView monitor and Intelligent Cruise Control.

The M45 Concept also showcases the latest in Infiniti safety technology, including a new Lane Departure Warning (LDW) system. The system recognizes lane markings and calculates the lateral distance between the vehicle and the lane marking, along with vehicle speed relative to the marking, and generates an audible signal to warn the driver of a pending, unintended lane departure. Engagement of the turn signals turns off the system and it also includes a driver cancel switch.

"Over 58 percent of fatal accidents in the United States are caused by lane departures, including single vehicle and head-on accidents," said Igo. "The LDW system is an important advancement in vehicle safety technology."

The Evolution of Luxury

"Luxury has evolved from what was once traditional, status-oriented luxury, to what has come to be a more meaningful, personal approach to luxury. The M45 Concept is yet another example of Infiniti's leadership in providing luxury that appeals to both the soul and intelligence of the driver," said Igo. "As we transition the M45 from concept car into our 2006 production vehicle, we'll look at a range of models that will satisfy individual needs and preferences – V8 or V6, all-wheel or rear-wheel drive, sports or luxury."