Infiniti has set out to captivate the imagination and exhilaration of sports coupe fans with the stunning Infiniti Q60 Concept. Premiered at the 2015 North American International Auto Show, the two-door concept hints at Infiniti's next sports coupe.

The show-stopping Infiniti Q60 Concept is an original and bold reinterpretation of an elegant lifestyle 2+2 coupe. Its unique combination of eye-catching contours, heart-pumping power and high-quality premium finishes gives premium customers a fresh and expressive style icon to which they can aspire.

"The Q60 Concept is Infiniti's most emotional and accessible concept so far," said Francois Bancon, Infiniti Vice President, Product Strategy. "This concept goes beyond a flight-of-fancy design exercise; it is the next proof point in Infiniti's concept-to-production approach. Come next year, Infiniti will produce a sports coupe with influences from the Q60 Concept."

The two-door fastback is concept vehicle for which Infiniti has a firm and clear intent for production. Similarly, the Q30 Concept, which debuted at the Frankfurt Motor Show about 15 months ago, is also planned to go into production this year. The breathtaking Q80 Inspiration was premiered at the Paris Motor Show in September.

Infiniti continues to broaden its lineup to cover the spectrum from smaller premium vehicles, namely the Q30, to full-size cars such as the Q70L. The seductive Q60 Concept reflects Infiniti's intention to strengthen its offerings in the mid-size segment and to cement its credentials as a premium brand driven by performance. 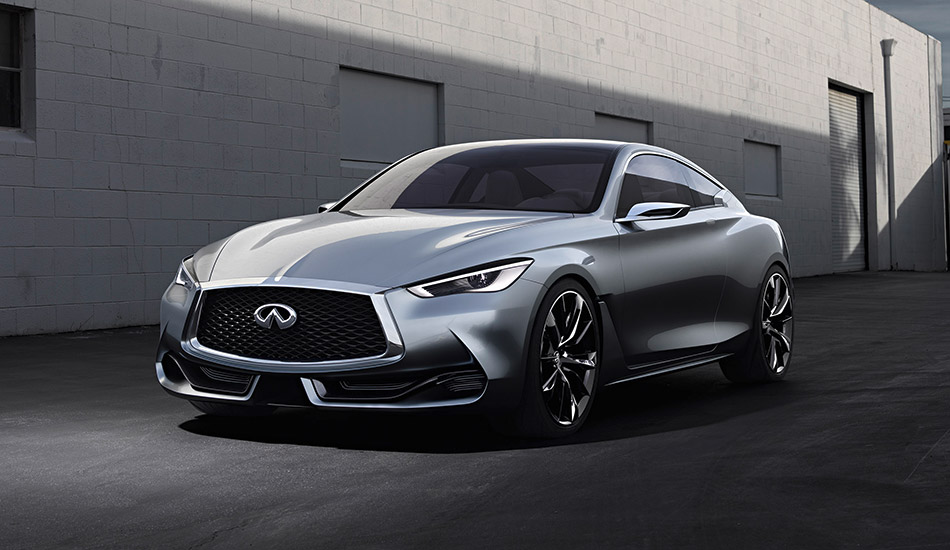 Progressive design, inside and out

Infiniti designers set out to create a sports car with a powerful road presence to match its top-notch performance. And the result is immediately obvious from the precise lines, sharp edges, striking dips in the body sides - all of which come together to give the Q60 Concept a formidable stance on the road.

The character lines running the length of the car from the double arch grille to the aerodynamic tail spoiler gives the vehicle its assertive look from front to rear. On the sides, the shoulder dips in with such a striking depth that it amplifies the visual excitement of the cabin.

The designers also emphasized the wheels to give the Q60 Concept an athletic profile. Donning arresting spokes in matte blacks and high-gloss black chromes, the deep 21-inch wheels fill up the wheel arches and give the concept its domineering stance.

The same refinement on the outside extends into the smallest detail on the inside, evoking a premium atmosphere with three-dimensional textures and meticulous craftsmanship.

The seats have also been designed to complement the car's character. An array of leathers was used to bring out the best comfort, from premium saddle leather to thick cushion quilting. Even oft-ignored rear passengers get stylish bucket seats, adding to the premium environment in the car.

The Infiniti Q60 Concept is expected to deliver exceptional performance befitting a true-blue sports car from the next-generation 3.0-liter V6 engine with direct injection and twin-turbocharging.

This all-new engine was first previewed in the Q80 Inspiration during the Paris Motor Show and will be part of a new family of lighter, smaller, more efficient and more powerful engines.

Slated to be introduced within the next two years, this new line of engines significantly reduces fuel consumption and carbon dioxide emissions while boosting power and torque for a more thrilling drive.

The Infiniti Q60 Concept also showcases a host of ingenious technologies to not only enrich the driving experience but also provide an intuitive level of driving assistance where required. This is in line with Infiniti's philosophy that technology should enhance the driver, not restrict them.

For example, the enhanced Infiniti Direct Adaptive Steering™ system allows independent control of the car's tire angle and steering inputs, transmitting the driver's intentions to the wheels faster than a mechanical system.

This increases the direct driving performance feel by quickly and intelligently communicating road surface feedback to the driver. Developed after more than 10 years of research, the system was a world's first when it premiered on the Q50.

Apart from augmenting the driving experience, the Infiniti Q60 Concept puts the spotlight back on the desires and needs of the driver and passengers through human-centric systems that provide a higher degree of available personalization.

This is made possible with the new Infiniti InTuition™ system, a fully customizable digital environment, which works with the vehicle's advanced Intelligent Keys to recognize the vehicle settings for up to four different drivers, including preferences for driving position, heating and cooling, audio, navigation, telematics.

Exuding unbridled power from its taut lines and potent road presence, the Infiniti Q60 Concept is the very epitome of high performance and sport dynamics. The two-door fastback is Infiniti's vision for a future sports coupe.

The angular exterior offers glimpses of Formula One car design, and the pampering interior delivers a premium experience with an array of handmade leather finishes, Alcantara® and carbon fiber.

"With the Infiniti Q60 Concept, we continue to take the artistry of coach building onto the road. Powerful and intense, the car looks like it's been crafted by hand. It's seductive and attainable," said Alfonso Albaisa, Infiniti Executive Design Director.

In many ways, the Q60 Concept is a progressive culmination and evolution of the Q80 Inspiration and Q50 Eau Rouge, both of which premiered globally last year. Design cues from both vehicles found their way onto the Q60 Concept, taking them one step closer to production reality. The Q60 Concept took after Q80 Inspiration's audaciously low roofline, intelligent headlamps and quilted leather seats while inheriting the gill on the lower front fender and Formula One-inspired lower intake from Q50 Eau Rouge.

"The Q60 Concept has the emotion and sculpting of the Q80 Inspiration. At the same time, it adopts the performance aspects of the Q50 Eau Rouge, which is immediately associated with Infiniti performance and the science and sport of Formula One racing," explained Albaisa.

The Infiniti Q60 Concept's sleek and aerodynamic design is anchored by its deep double arch grille, whose elaborate waved mesh pattern gives it a three-dimensional quality.

From the grille, the flowing character lines rise and merge into the headlamps, drawing attention to the intelligent LED lights. These adaptive headlamps react to the steering, speed and elevation of the car and automatically adjust the beam around each bend to illuminate the road ahead. 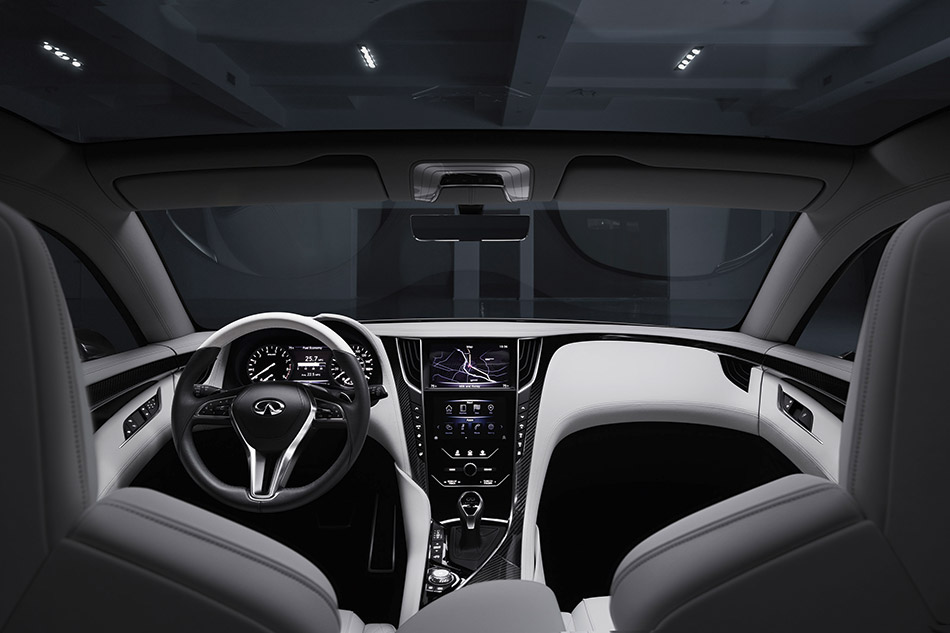 Inspired by the human eye - characteristic of Infiniti's vehicles - the headlamp has very fine fiber optic-like lines branching out from the projector. When lit, these filaments of LED lights look like lines of the iris radiating from the pupil, giving the headlamps a high-tech stare.

"We use these lyrical gestures to put warmth back into science and to make technology human-centric," said Albaisa.

Moving forward, Infiniti is also putting its stamp on future models with creative design flourishes. In the Q60 Concept, it is the little crest at the center edge of the hood that echoes the peak of the Infiniti logo. The line across the hood, the crease on each side and the lower bars all come together to highlight the link between the Infiniti brand and the front fascia.

The gentle slope of the roofline may give the Infiniti Q60 Concept its slippery coupe silhouette, but it is the character line running the length of the car from the distinctive grille to the pronounced tail spoiler that gives the concept its assertive look from front to rear. By splitting the profile, this line not only makes the car look lean and slender but also visually strengthens the car's stance to match its throbbing high-performance heart.

The highly defined body contours are executed with precision, and where the shoulder dips in with exaggerated depth is reminiscent of chiseled cheekbones or rippling muscles. An additional crease around the window opening further increase movement towards the rear while accentuating the hallmark crescent-cut C-pillars, which have been reinterpreted to elongate the flow of the sloping roof. The flow of the lines and the tight closing seams between panels and doors further augment the perceived quality of the coupe.

Wearing a special color named Arctic Aluminum, the Q60 Concept looks like it is machined from a solid aluminum block rather than painted. The new coating gleams like liquid metal and stretches around the body like a metallic skin, giving the impression that the coupe is a solid piece of liquid aluminum slicing through air, underlining its high-performance appeal.

To give the Q60 Concept a planted look that conveys empowerment and being in control, the Infiniti designers made the wheels more visible than the body.

"We carefully studied the area of the tire versus the area of the body in the side view, and we concluded to make the wheels more dominant. We'll definitely see more of this in future Infiniti models," said Albaisa.

Occupying pride of place, the newly designed 21-inch wheels fill up the wheel arches. Painted in a mix of matte blacks and high-gloss black chromes, the impressive spokes are inspired by jet turbine blades and stretch to the edge of the wheel, sending out a message that the Q60 Concept means serious business.

In the rear, the side character lines smoothly merge with the shape of the rear LED combination lights. Sporting the same fiber optics LED cues, the tail lamps look more three-dimensional than ever. Not only do the lamps act as design elements connecting the side and the rear, but they also accentuate the Q60 Concept's wide stance and wheel arches, which are sliced and flushed against the body.

The fully integrated top spoiler adds to the dynamic view from behind. It starts where the roof tapers off and flicks up in a duck tail for improved aerodynamics.

In a nod to its Q50 Eau Rouge roots, the concept gets large dual exhaust outlets with chrome finishers, which are integrated as part of an airfoil.

The inside of the Infiniti Q60 Concept has been designed to match with the sportiness outside, offering a powerful blend of three-dimensional textures, meticulous craftsmanship and the highest quality.

Infiniti designers used carbon fiber in the door accents to complement the performance of the car. Similarly, the double hand-stitched leather-covered steering wheel hints at the prowess beneath the hood.

The seats have also been designed to go with the car's exhilarating character. An array of leathers was used to bring out the best comfort, from premium saddle leather to thick cushion quilting. Bolsters were added to the sides for additional support.

In a segment where rear seats are regularly ignored design-wise, Infiniti has done the opposite and given rear passengers sporty bucket seats. This adds to the holistic premium environment in the Q60 Concept.

"When you open the door of the Q60 Concept, you can feel that the rockers are solid and the car is not to be messed with," said Albaisa. "And when you sit in the car, you can sense the artistry and tailoring wherever you look or touch."