Created by Kia design teams in Korea, Germany and the USA, New Magentis will transform Kia´s fortunes in the important D-Segment in Europe. On sale from Spring 2006, the 4,735 mm long new Magentis will be available in nine derivatives across Europe, providing customers with comfortable, spacious and refined transport in an elegantly understated all-new car. 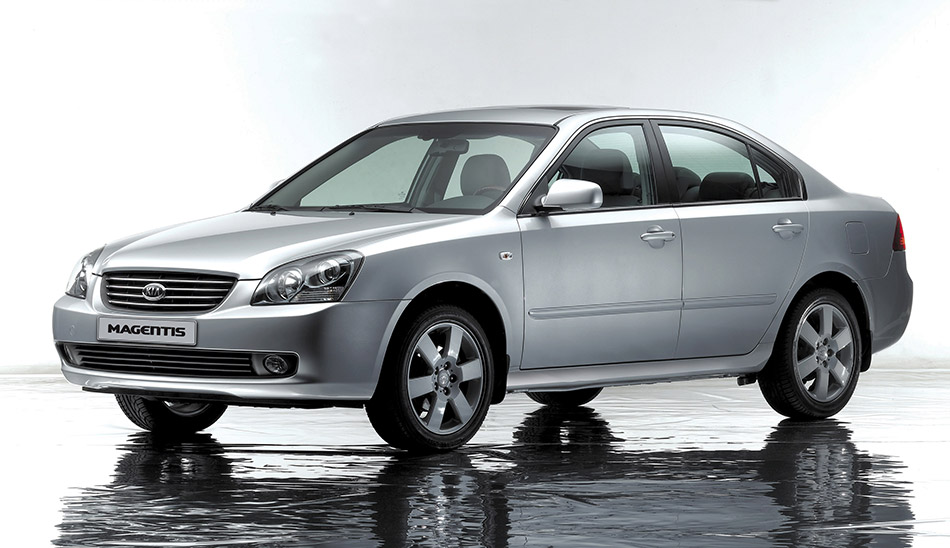 For the first time in the D-Segment, Kia will be offering customers a choice of gasoline and diesel engines in the Magentis. Available only in European Magentis models, Kia´s new 2-litre 140 ps CRDi diesel engine features a variable-geometry turbocharger (VGT) and a diesel particle filter (DPF) as standard, for optimum performance and economy, with clean Euro4 compliant emissions.

The availability of New Magentis with diesel power is not the only major innovation made by Kia to meet the specific needs of European customers. A special ´Europe Only´ interior, with an all-black or grey-black seating and trim combination, will replace the grey and beige two-tone treatment used in other markets.

Special ´Europe Only´ front and rear seats have also been developed, with longer cushions and larger side bolsters on both the cushion and backrest, to support occupants more securely during spirited driving. These seats will be standard fit for diesel powered models and will be introduced on all European market Magentis models later in 2006.

For Kia, the new Magentis will be a highly competitive entry into a significant segment of the European market and the new model line-up will feature a total of nine derivatives. Depending on the model selected, customers can choose from two equipment levels (LX and EX), two gasoline engines (2.7 and 2-litre) and one diesel engine (2-litre) with five or six speed manual and four or five speed automatic transmissions, and an extensive range of optional equipment.

Kia´s range-topping Magentis EX model can be ordered with a powerful, responsive, upgraded quad-cam 2.7-litre 188 ps V6 ´Mu´ petrol engine with VIS (Variable Intake System). Available in both EX and LX Magentis models, the all-new ´Theta´ 2-litre 144.5 ps petrol engine is an impressively quiet, state-of-the-art four-cylinder powerplant with CVVT. The new 2-litre CRDi diesel engine is also available in both EX and LX Magentis models. This SOHC engine produces 140 ps and 305 Nm of torque from 1,800 to 2,500 rpm (output to be confirmed). All three engines are smooth and powerful, with clean emissions complying with Euro4 standards.

Each New Magentis is fully equipped with active and passive safety measures to avoid hazards and protect occupants in real-world accidents. The all-new bodyshell is manufactured with a large percentage of high-strength steel. ABS with EBD, front and side airbags, front ´active´ head restraints and three-point seatbelts for all five occupants, are fitted as standard. In addition, ESP stability control, reverse parking sensors and curtain airbags are available as options.

Despite predictions that overall D-Segment sales in Europe will gradually decline to 1.48 million units by 2010, Kia is determined to maintain or grow its segment share. Depending on individual market conditions, Kia intends to triple sales of New Magentis - targeting sales of almost 10,000 units annually in Europe.

New Magentis is manufactured in Korea at Kia´s Hwasung 3 assembly plant. It is an exclusively Kia product, independently developed and built on the new MG platform, unrelated to the Hyundai Sonata, which uses a different wheelbase and suspension systems. In future years, the MG platform will also form the foundation for the replacement Kia Carens model. The new Magentis and the Sonata do share several engine and transmission components.

In Europe, New Magentis will have a three year, unlimited kilometre warranty, plus three years road-side assistance and a six year anti-perforation warranty. The nine-strong New Magentis range is scheduled to reach Kia showrooms from Spring 2006 and will be available in nine distinctive exterior colours.