How many drivers of a compact car have not already expressed a wish for more power in their automobile and if possible without extra fuel consumption and any additional environmental pollution? Until now, this went hand in hand with the other and therefore such wishes remained unattainable. On the Essen Motor Show 2010, Sportservice Lorinser now presents Easybrid as an innovative solution. A retrofit electric hub motor with 30 kW additional effective output, exemplarily fitted in a Smart Fortwo.

At the beginning of the 20th century, automobile manufacturers experimented with hub motors and fitted them into their cars – among them also Ferdinand Porsche. Nevertheless, this development was soon destined for obscurity, as the general public rather wanted a combustion engine. Due to the further increasing fuel prices and the current environmental, climate and CO2-debates, more and more companies are thinking about the future of individual mobility and display electric cars and hybrid automobiles, yet knowing that these will not get over their concept car status for the time being. Especially German automobile manufacturers seem to have missed the trend and only fit hybrid technology into luxury class automobiles if after all. 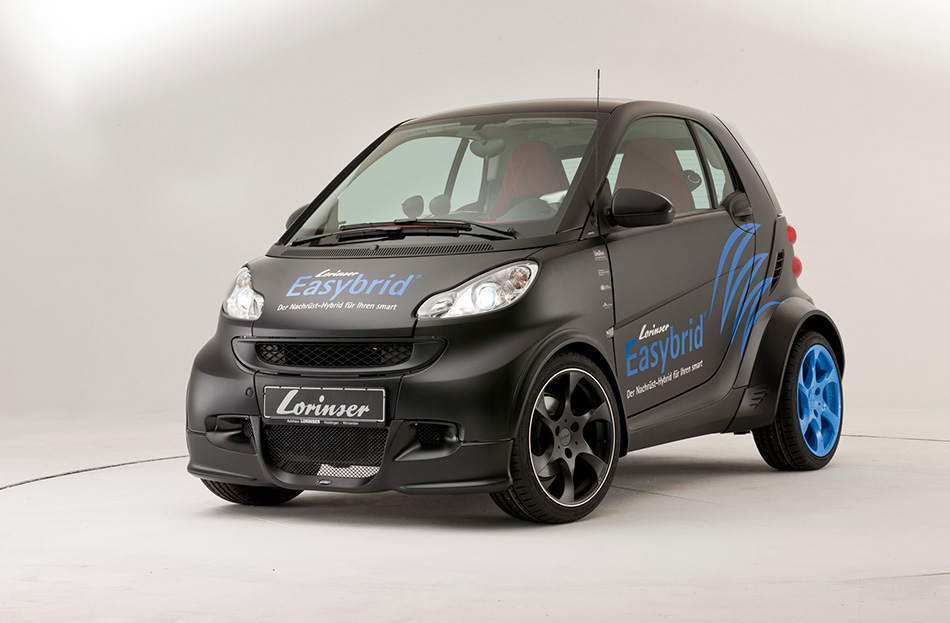 But what if it was possible to fit hybrid technology as a retrofit solution into cars which are designed for everybody? Is it after all possible to retrofit compact cars? Would such a modification not be too elaborate and therefore too expensive? Sportservice Lorinser, usually known for its sportive refining of Mercedes Benz automobiles, is now tackling these questions. The company based in Waiblingen / Swabia and its project manager Martin Oberdoerfer-Schmidt conclude: "The modification is possible and can also be performed in an easy and therefore economic way."

The preconditions are that the automobile in question has to have drum brakes at the rear axle, but this is quite common with small and compact cars. So-called stators are adapted to the braking armature discs. These are accumulated electric coils which are supplied with directed power via control electronics in order to magnetise them and therefore turn the rotor on the wheel hub which is equipped with permanent magnets in rolling direction.

Therefore, any kind of engine, differential and driving shaft becomes unnecessary as the engine directly affects the individual wheel and accelerates it. Altogether, this means that the nominal capacity of the electronic motor is transferred to the road nearly without any frictional loss. With the help of a control unit the power of the hub motors is added to the initial power of the combustion engine. As the modification is usually added to the rear axle, many of the vehicles in question are therefore turned into four wheel drive cars which render additional traction advantages at winter time.

Easybrid supports the existing fuel- or diesel engines of the individual cars and renders an additional power of approximately 30 kW (about 41hp) for improved acceleration- and final speed outputs. At the same time, the consumption- and CO2- levels drop. As electric engines are very powerful and their maximum torque is reached after only one revolution, it is also possible to move these cars solely on an electric basis. With this retrofit solution, Lorinser does not only cover all advantages of modern hybrid acceleration, but also allows the driver to choose his operational mode. Apart from the combination of both engines, he can also opt for either the sole electronic or sole combustion engine. The driver can therefore decide if he wishes to use fuel or electricity or a combination of both.

In order to recharge the lithium ionic batteries of the electric engine which for space saving measures are either stored in the reserve wheel drop or under the vehicle, the automobile can either be connected to a usual socket or use the so-called recuperation during its operation. This means that the energy which is generated during braking and driving downhill recharges the batteries. Therefore, the car can run approximately 30 kilometres on sole electric power and depending on the model far than 500 kilometres with the combined hybrid mode. In a combination with modern turbodiesel engines, even wider distances are possible. 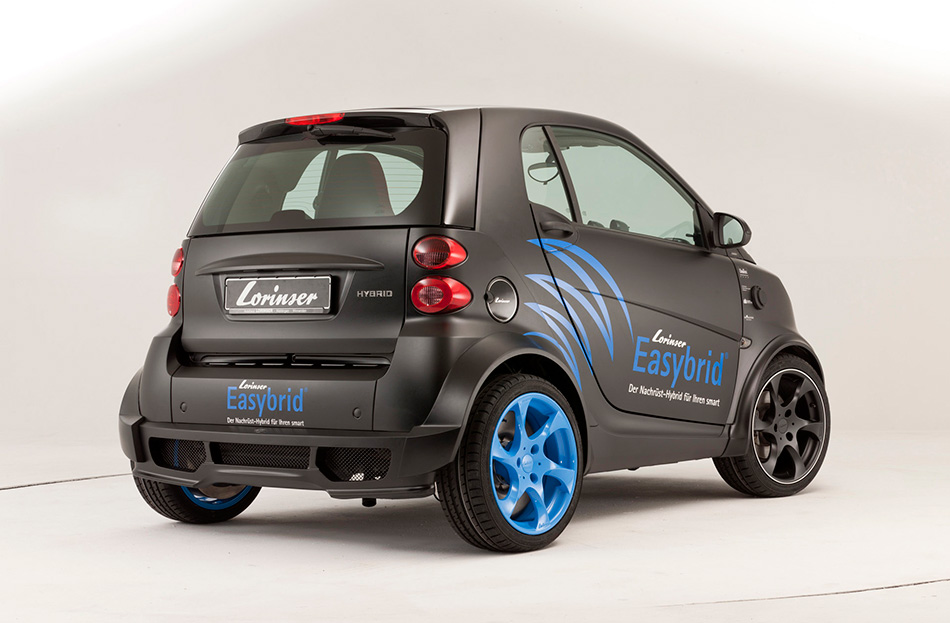 On the Essen Motor Show 2010 which starts on November 27th, Lorinser will introduce a first driveable prototype based on a Smart Fortwo with a retrofit hub motor. Further possible models suitable would be the Volkswagen Polo, the Renault Twingo or the Fiat 500. Also older models are suitable and in future, Lorinser will develop solutions for these models as well. Already since May 2009, the Lorinser engineers have been co-operating with external development partners on the retrofit hub motors and prototypes which were equipped with such technology. The test period will be ending by mid 2011 and from then on, it will be possible to equip first customer cars.

But of course, such a modification for compact cars only makes sense if it does not exceed the value of the automobile. Therefore, Sportservice Lorinser has revised the overall project and added an innovative idea. Following the offer for mobile phones, contracts can be introduced which bind a customer to an energy provider owning the batteries of the car on a long-term basis. The energy provider could therefore use its own battery as energy storage for vehicle-to-grid concepts and the car driver could pay the batteries by an increased energy price. Thereby, Lorinser pays tribute to the fact that mobility will not become any cheaper in future, but battery prices will significantly drop and fuel prices will surely increase.

Therefore, it is interesting for both parties – the drivers of electric- and hybrid cars as well as the utility companies. The latter could even introduce an energy flat rate for corporate clients with a fleet of electric automobiles. Such concepts are momentarily discussed with energy suppliers.

With such a battery financing concept between supplier and consumer, the modification of a compact car could come down to about EUR 5,000. If the government should participate in subsidising the lower CO2-emissions by putting an extra tax on automobiles with less favourable values, the effective costs for the hub motor retrofit could be even further reduced.