The family van is alive and thriving, especially when it's the 2015 Toyota Sienna debuting refreshed exterior styling packed with added safety, convenience and multi-media features. The 2015 Sienna, the only family van to offer an all-wheel drive option, is the ideal choice for hauling a large family, or loading up all your stuff for a weekend getaway.  Inside, Sienna really shines with an array of upgraded interior appointments and new convenience features allow the family hauler to remain kid-friendly, but in a parents rule environment.

After the new and enhanced safety features, the one new Sienna feature for 2015 that will have parents talking is the new Driver Easy Speak option. If you've ever had the urge to use a bullhorn to carry your voice to back seat passengers, Driver Easy Speak is your dream come true. Using the microphone from the Sienna's voice-command multi-media system, Driver Easy Speak conveys your voice through the audio system's rear speakers.

Combined with a standard conversation mirror integrated into the overhead console, Driver Easy Speak is the next best thing to having a hallway monitor in the van.

Subtle exterior styling refinements give the Sienna a more upscale look, with a revised front grille, and new slimmer headlight units with an advanced design for the SE and Limited grades. New LED daytime running lamps (DRLs), standard for the SE and Limited, give the Sienna a more aggressive appearance. All grades except the SE get redesigned taillight clusters, too.  It's not all about appearance.  A stiffer platform, with 142 additional spot welds, translates to a driving experience unexpected from a minivan. 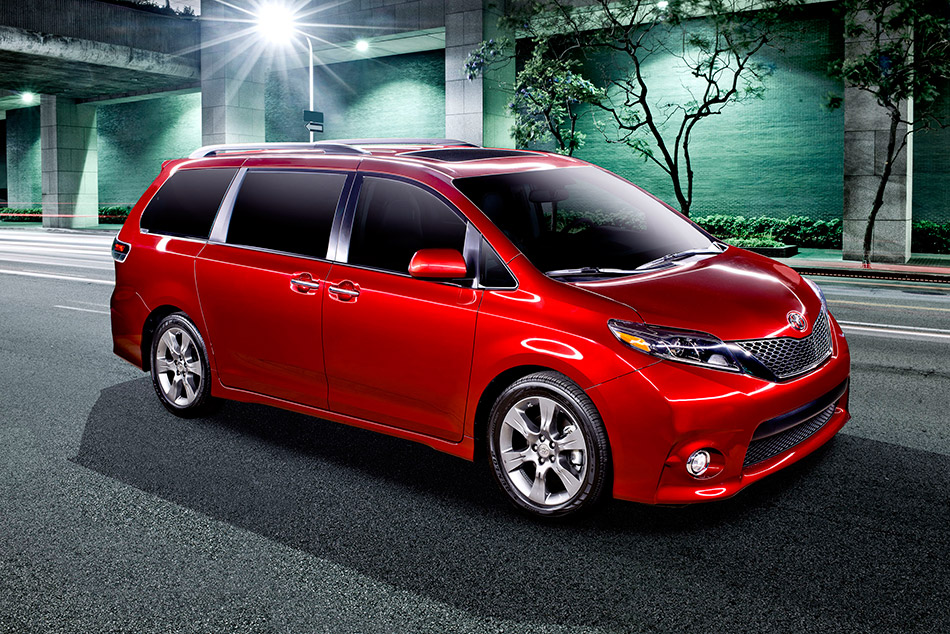 Toyota values the trust that customers put in the Sienna, and for 2015, the van's safety roster gains numerous enhancements. For securing child seats, there's an additional LATCH location available in the third row seat, for a total of four locations. Toyota increased the side curtain airbag coverage area by 30 percent, helping to improve protection in a collision.

A new front passenger seat cushion airbag enhances restraint performance during a collision. The front passenger airbag features a twin-lobe airbag, which simulates a twin-chamber design, with a depression in the center, to help reduce impact forces. The front passenger seat has a new selectable force-limiting seatbelt to help enhance safety for a greater variety of physiques. Airbag control in the 2015 Sienna has been modified to better match needs for vehicle rollover and small overlap collisions.

Not all arms are created equal, which is why the new available pushbutton driver's seat center armrest in the 2015 Sienna can be adjusted to many positions. It even remembers the last position after the armrest has been stowed.

Getting vehicle information at a glance just got easier in the 2015 Sienna. All models come with a new multi-information display in the instrument panel, directly ahead of the driver. There's a base 3.5-inch dot-matrix LCD version or a 4.2-inch color TFT (thin film transistor) display on up-level models. With either, you can toggle to audio controls using the four-way switch on the steering wheel. The TFT version is linked to the multi-media system and can also display navigation information. This version can even show all-wheel drive operation on AWD models.

The 2015 Sienna brings the sound of music more conveniently through the newly upgraded Display Audio Entune™ multimedia system with subscription-free App Suite on most grades. Just pair a compatible smartphone to access popular mobile applications and data services. You can do so using Bluetooth wireless or a USB cable. Then, use the Sienna's controls to operate the apps. For some services, you can use the voice recognition. The Entune App Suite includes mobile apps for Bing™, iHeartRadio, MovieTickets.com, OpenTable®, and Pandora®. Entune data services include a fuel price guide, sports scores, stocks, traffic and weather.

You can launch Entune apps by pressing a switch on the steering wheel and speaking the name of the app, then using voice commands to operate it.  The audio unit can download new Entune apps as they're developed, including the necessary voice recognition components.

Toyota brings versatility, peace and harmony to rear seat entertainment with the Dual View Entertainment Center, which uses two viewable displays within a seamless 16.4-inch widescreen image. New for 2015 are Blu-Ray capability, an HDMI input, and an SDXC card reader that can play 10 different audio and video formats.  The system plays from one or two separate sources. Used as a single screen, it can be easily seen from the third row, and it can be operated from any seat via remote control.  The system also includes a pair of wireless headphones, allowing passengers to enjoy viewing their respective screens without a fuss.

The 2015 Sienna is available in five grades: L, LE, SE, XLE and Limited. All-wheel-drive is available on LE, XLE and Limited models. The L grade includes a long list of value features families have come to expect.  With all its additional content, the Sienna LE could be mistaken for a top-of-the-line model -- but there are still three more grades above it.  The XLE adds even more standard features while the ultimate family van, the Sienna Limited, is packed from sliding door to sliding door with luxury.

Never let it be said that moving into a family van means giving up style and driving pleasure – not with the Toyota Sienna SE. Looking like a sport sedan that morphed into a family van, the Sienna SE drives sporty, too, thanks to a lowered, sport-tuned suspension and 19-inch wheels, for sharper handling agility. The side skirt body elements and smoke-look sport trim help make the Sienna SE look even lower, while new, lower-profile headlights with LED daytime running lamps (DRL) complement the muscular style.

With family vans, you can never have enough space. The Toyota Sienna offers a choice between seven- and eight-passenger configurations and comes chock full of versatile features for shuttling passengers comfortably or hauling lots of whatever you've got. With the third-row seat stowed and the second-row seat removed, it passes the plywood test with room for cargo eight feet long and four feet wide, providing up to 150 cubic feet of available space.

Sienna is super-easy to load, thanks to a wide tailgate and wide side doors, low floor height and tip up and slide second-row seats. You'll find numerous storage bins, spaces and cupholders throughout the cabin.

No matter where you sit in a Sienna, the outward view is airy. In seven-seat cabins, the second row captain chairs slide 23 inches rearward to create legroom for the tallest passengers and easier ingress and egress. Or, the seats can be moved forward closer to the front seats to make it easy to reach a child passenger, while also allowing easy access to the third-row. 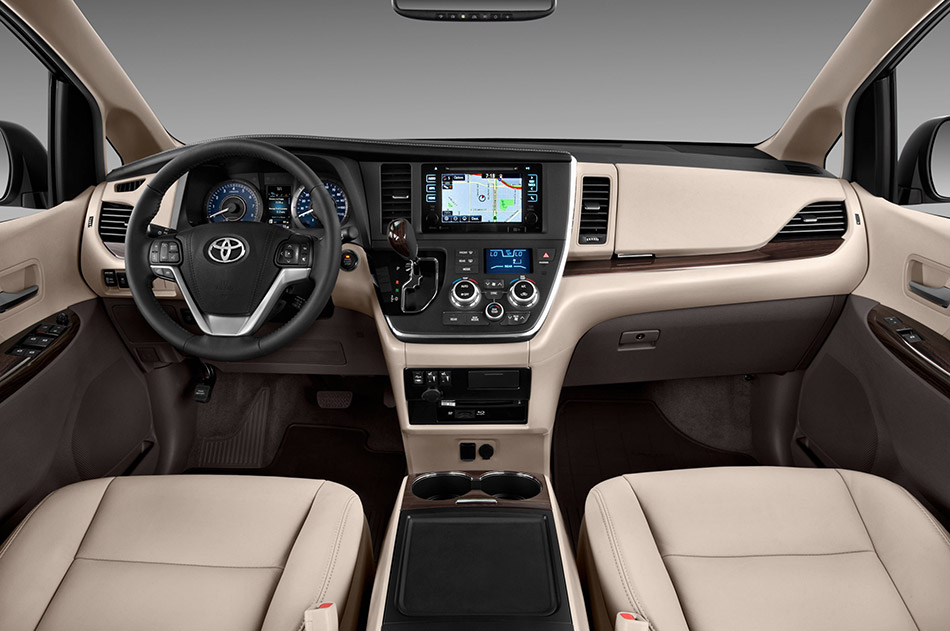 A sliding center console on the FWD Limited grade can be shared between the front seats and second row passengers. The illuminated console slides into the second row area to provide convenient access for both rows.

On eight-passenger models, the second row center seat can be removed and stowed in the left side of the rear-storage area, leaving a cupholder and storage tray between the two remaining seats. The Tip Up and Long Slide feature lets you slide the seats forward and back on extended rails, adjusting room as needed for passengers or cargo. Sliding the second-row seats all the way to the rear creates a walk-in aisle, making it easier to enter, exit, install a child seat, or place a child in a seat. Regardless of cabin configuration, all second-row seats provide easy access to the third-row.

The third-row seat is not short of surprises, either. The 60/40 Split and Stow third-row seat folds flat with one motion, with the Limited FWD model receiving a power seat-lowering feature. Even with the third-row seat in use, there's enough storage room for five golf bags or four large suitcases. Handy grocery hooks in both rows add storage convenience.

The addition of the front passenger seat cushion airbag brings total airbags to eight in the 2015 Sienna, including dual-stage front airbags and seat-mounted side airbags for the driver and front passenger, plus a driver's side knee airbag. The side curtain airbags -- now with 30 percent greater coverage area for 2015 -- cover the length of the cabin, from the front seats to the third row. Active headrests in both front seats help to reduce the possibility of whiplash in certain types of collisions.

The available Blind Spot Monitor with Rear Cross Traffic Alert on SE, XLE and Limited grades uses sub-millimeter wave radar designed to detect vehicles that are in the driver's blind spots. When the system detects a vehicle in the adjacent lane, it alerts the driver using indicators on the side mirrors. If the turn signal is on when there is a vehicle in the blind spot of the driver's intended lane, the indicator on the corresponding mirror will flash. Rear Cross Traffic Alert can be especially helpful when backing out of a driveway or parking slot.

A Pre-Collision System (PCS) is available on the Limited grade, as is Vehicle Dynamics Integrated Management (VDIM). The VDIM system coordinates brake control with engine output and steering inputs. Unlike reactive traction systems, VDIM operates proactively. During normal driving, the system works smoothly to enhance control even before the vehicle reaches its limits.

Toyota's 36-month/36,000 mile basic new-vehicle warranty applies to all components other than normal wear and maintenance items. Additional 60-month warranties cover the powertrain for 60,000 miles and corrosion with no mileage limitation.