The essence of Mazda's Zoom-Zoom spirit is providing customers with stylish, insightful, spirited products capable of enriching their lives in exciting ways. At this year's North American International Auto Show, Mazda is presenting Kabura, a design concept that ventures beyond the compact sports coupe norm to explore several fresh ideas that could appear in future production models.

To deliver the true "Soul of a Sportscar" that is the essence of every Mazda, Kabura incorporates the front-engine, rear-drive layout universally admired by driving enthusiasts and long delivered by Mazda's MX-5 and rotary-engined sportscars.
To support youthful lifestyles, Kabura stretches the bounds of interior versatility in radical directions. Replacing the typical 2+2 layout is a clever 3+1 arrangement which establishes a new interior concept giving greater passenger comfort versus a traditional coupe without increasing weight or size. Obliging spur-of-the-moment adventures and shopping sprees, all passenger seats fold flat to make way for snow boards, shopping bags and all the tools of an active life .

While Kabura has the presence of an exotic sports car, it has the practicality and affordability that youth can yearn for and afford. 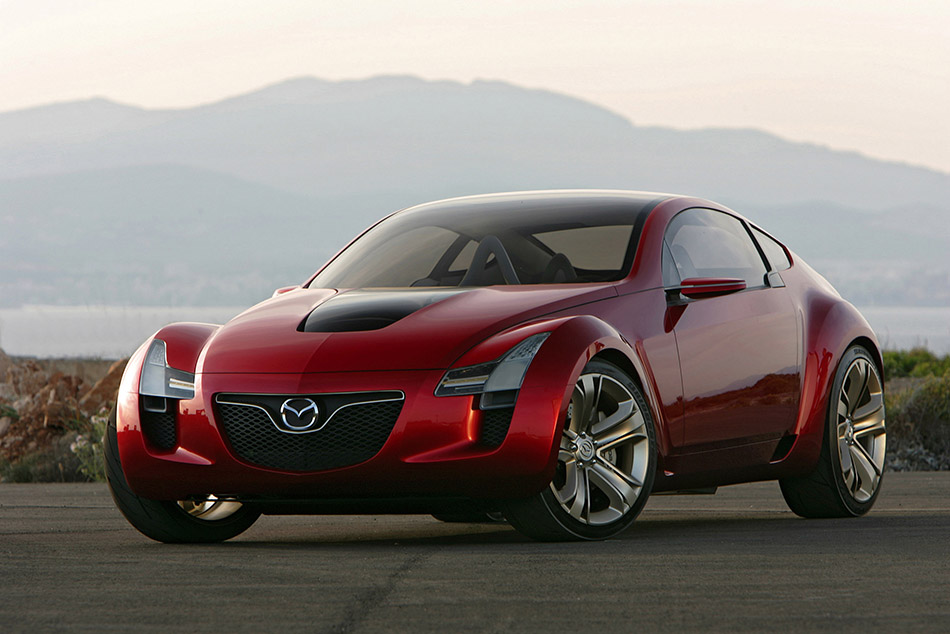 "Kabura" is a Japanese term taken from "KABURA-ya", an arrow that makes a howling sound when fired and was historically used to signal the start of a battle. The "first arrow into battle" depicts Mazda's spirit of pursuing unique and exciting ventures - such as the rotary engine.

Kabura is not only the first Mazda compact coupe for the 21 st century, it's also the first project guided by Mazda North American Operations' (MNAO) Director of Design Franz von Holzhausen, who joined Mazda in February 2005. The 37-year-old von Holzhausen studied industrial design at Syracuse University and graduated from the prestigious Art Center College of Design in Pasadena , Calif.

"With Kabura, we set out to use innovative design to rekindle the passion for driving," notes von Holzhausen. "Our intention is to rouse the segment with some intravenous creativity. While we have no plans at the moment to build a production version of Kabura, it is not a complete flight of fancy. It embodies several innovations Mazda could implement when a compact sports coupe, steeped in Zoom-Zoom, is ready for production."

According to a recent survey performed by a major research organization, Mazda's new-car customers are the second youngest in North America , at only 41 years of age .

Generation-Y buyers are several steps ahead of the latest trends and constantly on the lookout for affordable possessions that satisfy their hunger for stylish, insightful and spirited designs. One of Kabura's roles is exposing a likely future design direction to today's demanding customers.

Power is supplied to Kabura's rear wheels by a 2.0-liter version of Mazda's highly respected MZR DOHC 16-valve engine and through to 245/35R19 Bridgestone Potenza front tires and 245/35R20 tires at the rear. While this concept has been constructed over several MX-5 chassis components, basic dimensions fall between Mazda's MX-5 and RX-8 sportscars.

Were the Kabura design study to achieve production status, it would likely be a stand-alone product rather than an extension of any existing model line.

Von Holzhausen describes Kabura's exterior as "a nimble-looking fuselage with a powerful stance, pronounced wheel arches and taut surfaces." He adds , "Every line flows into another with no open ends. Surfaces are drawn tight over the wheel arches, the way a spider's web stretches between anchor points."

While Kabura's profile is reminiscent of classic coupes, the windshield and forward portion of the roof are integrated into one seamless glass surface that extends from the cowl to the B-pillar. Admitting extra light enhances the interior's feeling of airy space. Overhead portions of the glass have adjustable tinting so that the driver can twist a knob on bright days to change the roof's opacity, as desired, from clear to completely opaque.

Behind its B-pillar, Kabura has a two-piece glass hatch. The uppermost glass panel normally lies flush. When pivoted-up by an electric motor, the way ailerons rise out of an airplane wing, this panel serves three purposes: it acts as a roof spoiler, it vents air from the interior and it greatly augments the rear passengers' headroom. In addition, a photovoltaic solar cell in the panel helps to control ambient temperature as well as recharge the battery. The larger glass hatch panel has side-mounted hinges to provide ready access to Kabura's spacious cargo compartment.

"While examining the habits and tastes of our youthful customers, we found that the majority have a need to carry one or at most two passengers in comfort, while a very small percentage actually use the fourth seat on limited occasions," von Holzhausen continues, noting the level of research and planning that goes into the creation of a major automaker's concept vehicle. "Clearly, the standard 2+2 compact coupe configuration with restricted rear access and limited seating space doesn't work in this context, so we created a 3+1 layout for Kabura that resolves those shortcomings".

A standard left-side door provides access to the driver's cockpit and the rear jump seat. The right side is a wholly different and purposely asymmetrical arrangement. Removing the glovebox and minimizing the instrument panel allowed designers to shift the front passenger six-inches ahead of the driver's seating position. In turn, the second passenger, sitting in tandem behind the right-front passenger, enjoys approximately the same leg, shoulder, and headroom.

Developed on the RX-Evolv and RX-01 showcars, Mazda designers invented the rear-hinged freestyle doors to improve the RX-8's rear-seat access. Kabura proves that inspiration can strike twice in pursuit of spirited, stylish design that provides customers more than they ever dreamed possible.

To maintain a sleek roofline while offering rear access that's vastly superior to what's available in today's compact coupes, von Holzhausen's team designed Kabura with an extra right-side door. After the front door is opened, touching a button slides the bonus door straight back and out of the way.

Instead of swinging on hinges as in the innovative Mazda RX-8, this additional door glides neatly into a cavity notched into the rear-quarter panel area the way a pocket door disappears into a house wall. "Kabura may be the first compact coupe where no passenger has to call 'shotgun!' to avoid the second-class citizen treatment," von Holzhausen pointed out.