Mercedes-Benz has unveiled a stand-alone model series in the guise of the new CLC, the compelling entry-level model in the Mercedes-Benz coupé family. The Sports Coupé's design, technology and equipment meet the discerning requirements of young drivers looking for an athletic car that gives an involving drive, while at the same time delivering the hallmark Mercedes quality standards in terms of safety, comfort, environmental compatibility and functionality. Compared with the previous Sports Coupé, the Mercedes engineers have newly developed or enhanced over 1100 components. Engineering highlights of the CLC include a new direct-steer system for even more agile cornering, state-of-the-art infotainment systems featuring a colour display, Europe-wide DVD or hard-disc navigation and media interface,Parktronic as standard on all models as well as an uprated four-cylinder engine that now develops 184 hp and improved fuel consumption compared with the outgoing model. 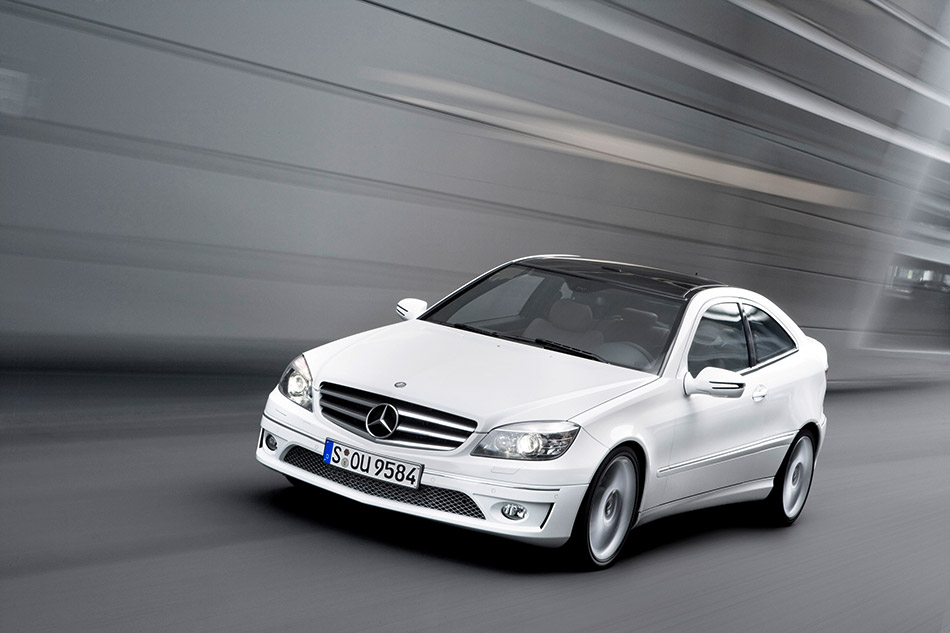 The compact body dimensions and the muscular lines emphasise the sporty appearance of the new CLC. The Mercedes designers have completely redesigned the front and rear so that the Sports Coupé embodies the contemporary Mercedes design idiom with its distinctive coupé radiator grille featuring a large Mercedes star in the centre, and the new projection-beam headlamps. The S-Class, the luxury CL-Class Coupé and the C-Class provided the stylistic models. The redesigned large tailgate conceals a variable boot with up to 1100 litres of luggage capacity. The new tail lights, the long row of LEDs which make up the third brake light unit and the rear bumper subdivide the rear and emphasise its width.

The interior of the new Mercedes-Benz CLC is akin to a contemporary tailor-made suit -- custom-fit and comfortable. Sports seats with better lateral support than ever, a three-spoke multifunction steering wheel, automatic climate control and brushed aluminium trim elements form part of the standard specification. A choice of seat covers in black, alpaca grey and a particularly stylish combination of black and red are available to give the interior its individual colour scheme.  The CLC also benefits from having ISOFIX fixtures and Child Seat Recognition as standard.

Mercedes-Benz has put together a Sport model for drivers looking for extra sporting flair. It includes exclusive engineering innovations and equipment extras such as 18-inch light-alloy wheels, wide-base tyres, headlamps with black inner surrounds, sports suspension with lowered body, leather sports steering wheel and dark brushed aluminium trim elements. Another special feature which the CLC inherits from its racing car counterparts is the instrument cluster with red needles for the speedometer and rev counter. Once the engine is switched on, these needles spin once around the dial before returning to their start positions.

The standard specification for the Sport includes a new direct-steer system, which further enhances the agile driving experience of the CLC while adding an important boost to safety. This new feature is based on the speed-sensitive power steering and also offers a variable rack ratio which changes as a function of the steering angle so that the driver only has to turn the wheel slightly when cornering; the Sports Coupé therefore responds far more spontaneously to steering commands and offers even sportier handling. As a result, the direct-steer system also improves handling safety in critical situations -- for instance when taking sudden evasive action -- as the field tests conducted by the Mercedes engineers demonstrate.

Mercedes-Benz offers four four-cylinder and two six-cylinder engines with power outputs ranging from 122 hp to 272 hp for the new CLC. The 184 hp powerplant in the CLC 200 KOMPRESSOR now develops an extra 20 hp while now returning 36.2 mpg – the equivalent of up to 2.8 mpg more than before. The CLC 200 CDI returns a consumption of 48.7 mpg which is improved by 2.4 mpg over the outgoing model. The CDI models boast operating ranges of over 600 miles on a full tank of fuel (62 litres).

Infotainment: state-of-the-art technology for navigation and musical enjoyment on wheels

The Mercedes engineers have developed a new generation of infotainment units for the CLC, bringing luxury-class cutting-edge technology to the Sports Coupé as of September 2008. Three units are available, offering a superb combination of colour display, twin tuner, speed-sensitive volume control and Bluetooth mobile phone interface. An iPod, USB stick or other external audio devices can now also be connected to the infotainment system. A new universal media interface (optional extra) links these devices to the on-board electronics and the Sports Coupé's control system, allowing the iPod tracks to be displayed in the instrument cluster and on the colour screen in the centre console. Tracks can then be selected conveniently using the buttons on the multifunction steering wheel.

The new Audio 50 and COMAND units come with a Europe-wide DVD or hard-disc navigation system. The LINGUATRONIC voice-operated control system, which Mercedes-Benz has upgraded with a new whole-word recognition capability, is fitted as standard if the integrated six-disc DVD changer is specified. LINGUATRONIC enables the driver to conveniently operate the telephone, audio and navigation system.

The new CLC is the successor to a successful Mercedes model that boasts some 320,000 drivers around the world to its name since 2001, 45,255 of which were in the UK. The majority of these were new Mercedes customers. Its high conquest rate of some 70 per cent made the Sports Coupé one of the most successful models in the Mercedes strategic product initiative. With the help of a compelling two-door model, the Stuttgart-based car maker has managed to fire customers' imagination over the long term. Over 40 per cent of buyers opted for a larger Mercedes model after the Sports Coupé and are currently driving an E-Class, CLK or an SLK.

Thanks to its sophisticated design, high-quality equipment and appointments, and enhanced technology, the new Mercedes-Benz CLC offers even more conquest potential than its predecessor. The public will get the chance to take a close look at the Sports Coupé for the first time at dealerships in June 2008.