The new look of the E-Class Coupé and Cabriolet is mainly the result of the redesigned front end, with new headlamps comprising all functional elements behind a single headlamp lens. The indicator, position and daytime running lamps sitting atop each pair of headlamp eyes use LED fibre-optic cables that produce a "torch" effect. These striking, curving lighting elements help to reproduce the four-eyed look so typical of the E-Class, and give both Coupé and Cabriolet an unmistakable night design. LED technology is employed for the low beam and daytime running lamps as standard, while customers are also given the option of all-LED headlamps for the first time in this segment.

The front of the E-Class Coupé and Cabriolet, featuring a sporty, upright radiator grille with central star, clearly spells status, self-assurance and sportiness. Now free of all lighting functions, the restyled bumper with its more pronounced V-shape serves up a fascinating interplay between surfaces of varying curvature with crisp contour lines and soft shapes. It has a sophisticated appearance, while the wing design of its curved spoiler lip clearly underscores the sporty aspirations and dynamism of these agile cars.

All in all, the front end with its sports car grille presents a distinctive, sporty face, but at the same time emphasises the close affinity between the Coupé and Cabriolet and the new E-Class Saloon. 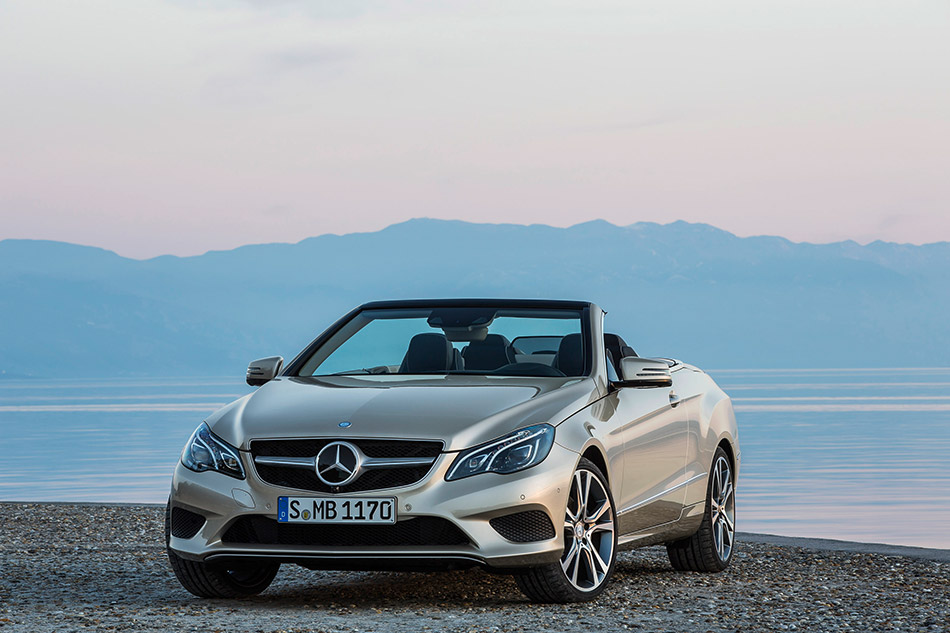 The Coupé has classic proportions with a long bonnet, elongated side window design, flat roof line, and muscular tail end. Traditional styling cues that render Mercedes-Benz coupé models so individual and unmistakable give added impact to the two-door model's striking lines – such as the frameless doors and the‑outline of the fully retractable side windows without any B-pillars to interrupt the flow.

The four-seater Cabriolet model also has fully retractable side windows, with structure lines that continuously ascend gently as they run from the front to the boot lid emphasising its clear proportions. The elongated beltline, which merges into the longer-looking tail end, stretches the Cabriolet's flanks and means that it cuts an especially dynamic figure when driving with the roof down. When the soft top is closed, it blends harmoniously into the silhouette to stunning effect, thanks to its flat roof edge and slender C-pillars. The classic fabric soft top additionally bestows the vehicle with a sense of exclusive elegance at the same time as evoking memories of the great four-seater Mercedes-Benz cabriolets of the past. Both the Coupé and the Cabriolet retain the muscular-looking rear wings as a visible sign of the sporty cars' rear-wheel drive and athleticism and a clear declaration of their performance potential.

At the rear, the lights and bumper have been revised. The new, slimmer LED tail lights extending far into the flanks emphasise the vehicle width, and use LED fibre optics to create a distinctive night design that is typical of Mercedes. A third brake light as well as the white-effect number plate lighting also make use of LED technology.

The new broad-looking rear bumper captures the new design idiom and brings it to a powerful, coherent conclusion with a wing attachment with chrome-look trim that appears to be floating. Depending on the specification, the tailpipes are either concealed out of sight or highlighted for the onlooker. The eight-cylinder models as well as models with the optional Exterior Sports package or AMG Sports package have trapezoid-shaped tailpipe trims integrated into the bumper.

E-Class Coupé and Cabriolet owners can also add some individual visual highlights with an attractive range of new wheels. The four- and six-cylinder variants of both model series ride as standard on wheels measuring 43.2 cm (17 inches), while the eight-cylinder models are fitted with 45.7 cm (18-inch) wheels. Further wheel variants can be specified as optional extras.
The models' sporty, exclusive nature is further underlined by the new special paint finish aragonite silver, which was specially developed for the E-Class Coupé and Cabriolet. The soft top colour dark brown has also been introduced with the facelift.