Bold athletic flair and supreme versatility define the character of the MINI Countryman. As the first MINI with four doors, a large tailgate, five seats and optional all-wheel drive, it took on the role of an irresistible front-line force from the very outset - both in the conquest of additional target groups for the British premium brand and in the area of off-road driving. Its irrepressible forward thrust and flexibility are now expressed even more strikingly in an exclusive edition model. The MINI Countryman Park Lane sees its world premiere at the 2015 Geneva International Motor Show. It will be available worldwide in up to four engine variants from July 2015.

The MINI Countryman has enabled the brand to establish a secure standing in the premium compact segment. Unmistakable design, premium quality, an interior concept of exemplary versatility and typical MINI driving fun both on and off the road go together to create an overall package that is unique in this category of vehicle, meeting the multi-faceted mobility needs of demanding target groups in urban traffic and beyond. In this way the MINI Countryman has successfully asserted itself as an all-round talent with individual style. For the first time, this special status within the competitive environment is now underscored with an edition model. A distinct design and colour concept as well as high-end equipment features make the MINI Countryman Park Lane an authentic ambassador for versatile driving fun in the compact segment. 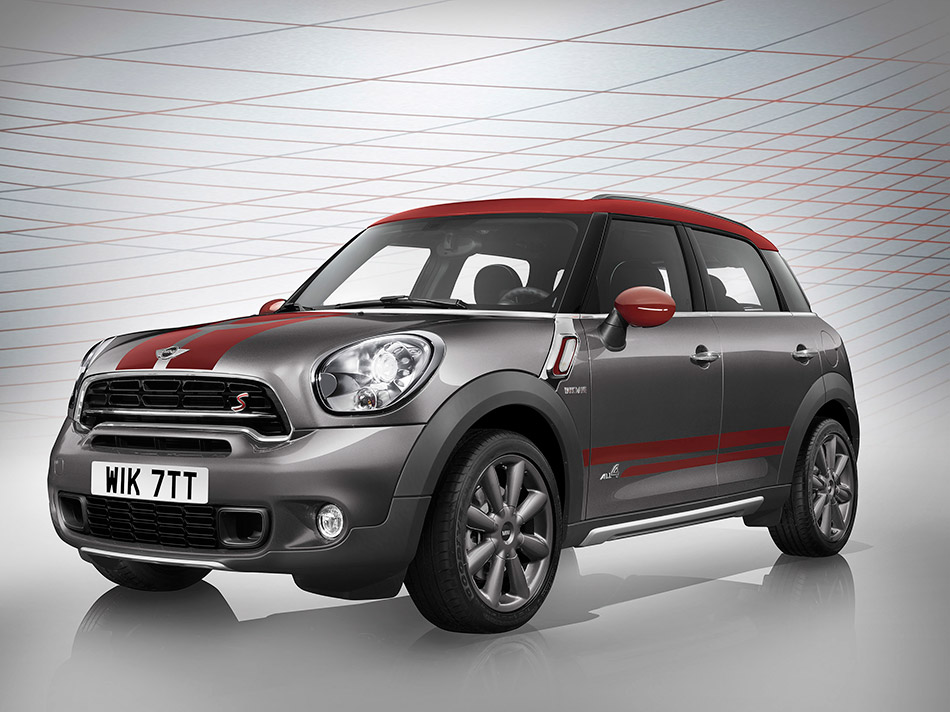 The MINI Countryman Park Lane indicates its high-end individual flair at first sight with a specially developed design and colour concept. The body finish in Earl Grey metallic is combined with the entirely new colour variant Oak Red for the roof and exterior mirror caps, supplemented with optional sport stripes in the same colour for the bonnet, tailgate and lower side sections. The characteristic side turn indicator surrounds in chrome known as side scuttles also comprise an inlay in Oak Red. The MINI Countryman Park Lane boldly accentuates its classic athletic character with 18-inch light alloy wheels in Turbo Fan Dark Grey design and the MINI ALL4 Exterior visual package including silver body elements for the front and rear apron as well as the side sills.

Exclusive emblems on the side scuttles and the cockpit surface bear the inscription "Park Lane", as do the entry sills. The interior surfaces in Oxide Silver for the door bezel and cockpit trim and Cross Stripe Grey for the side surrounds of the centre console were also designed exclusively for the MINI Countryman Park Lane. These go together with the inlay colour Carbon Black for the door trim and centre console to create a sports-style premium ambience in the interior.

The edition model can also be combined with a particularly high-end equipment package. As the MINI Countryman Park Lane Chili, the all-rounder additionally comprises features such as LED fog lamps and white direction indicators. The Chrome Line Exterior is available as an optional extra at no additional charge. What is more, the models MINI Cooper S Countryman, MINI Cooper S Countryman ALL4, MINI Cooper SD Countryman and MINI Cooper SD Countryman ALL4 are fitted with xenon lights. The interior fittings are supplemented with sports seats in the fabric/leather finish Parallel Lines Light Tobacco, automatic air conditioning, an on-board computer, a rain sensor with automatic driving light control, the Sport Button, a sports steering wheel with multifunction buttons, velour floor mats and a storage and lighting package.

Located in the London borough of Mayfair, Park Lane is one of the most distinguished addresses in the British capital. MINI itself has a prestigious showroom there. It is the third time that Park Lane has lent its name to an exclusive edition model of the brand. A version of the classic Mini with particularly high-end fittings bore the designation in 1987, while another MINI Park Lane came out in 2005, following in the footsteps of its predecessor after the brand's relaunch. Now the tradition of naming design and edition models made by the British premium automobile manufacturer after London streets and districts is applied to the MINI Countryman for the first time.

The precisely coordinated exterior and interior features of the MINI Countryman Park Lane underscore both the versatile functionality and the exclusive charisma of the premium compact model. With its high-end features and versatile customisation options, this all-round talent offers five seats, including a rear seat that can be shifted longitudinally and has a folding backrest with a 40 : 20 : 40 split. As a result the luggage volume can be expanded from 350 to up to 1 170 litres as required, allowing the MINI Countryman not just to tackle the challenges of everyday urban traffic but also transport bulky sports equipment or carry everything required for a family holiday.

Powerful, efficient engines and high-quality suspension technology ensure that the hallmark brand agility known as the go-kart feeling is brought to life in the compact segment, too - further enhanced by an additional facet with the permanent all-wheel drive system ALL4 that was developed especially for MINI. What is more the car's raised seating position offers a supreme view of the road, giving the characteristic MINI drive feel a whole new dimension. For the MINI Countryman (combined fuel consumption: 7.3-4.2 l/100 km, combined CO2 emissions: 169-111 g/km) there are three petrol and three diesel engines available, covering an output range of 66 kW/90 hp to 140 kW/190 hp. Four power units can be optionally combined with ALL4. Over and above this, the 160 kW/218 hp MINI John Cooper Works Countryman provides extreme driving fun: here the engine power is transmitted to all four wheels as standard.