When it was originally introduced in 1999, the Nissan Xterra stood out in a crowd of nearly 40 competitive sport utility vehicles with its rugged truck frame, purposeful styling and "everything you need, nothing you don't" adventure positioning. As the all-new, second generation 2005 Xterra makes its world debut at the New York International Auto Show, the competitive field of SUVs has grown to over 70 models. Yet one thing remains unchanged – the Xterra still stands alone as a segment of one.
The 2005 Xterra builds on the original's unique positioning with improvements on all functional and user attributes with more power, more roominess and more features, including enhanced off-road performance systems.

Two of the most significant changes to the new Xterra are the use of a version of the new "F-Alpha" platform, which was created for use on the new Nissan Titan full-size pickup and Nissan Armada full-size SUV, and the utilization of a new 4.0-liter version of Nissan's VQ-series V6 engine. 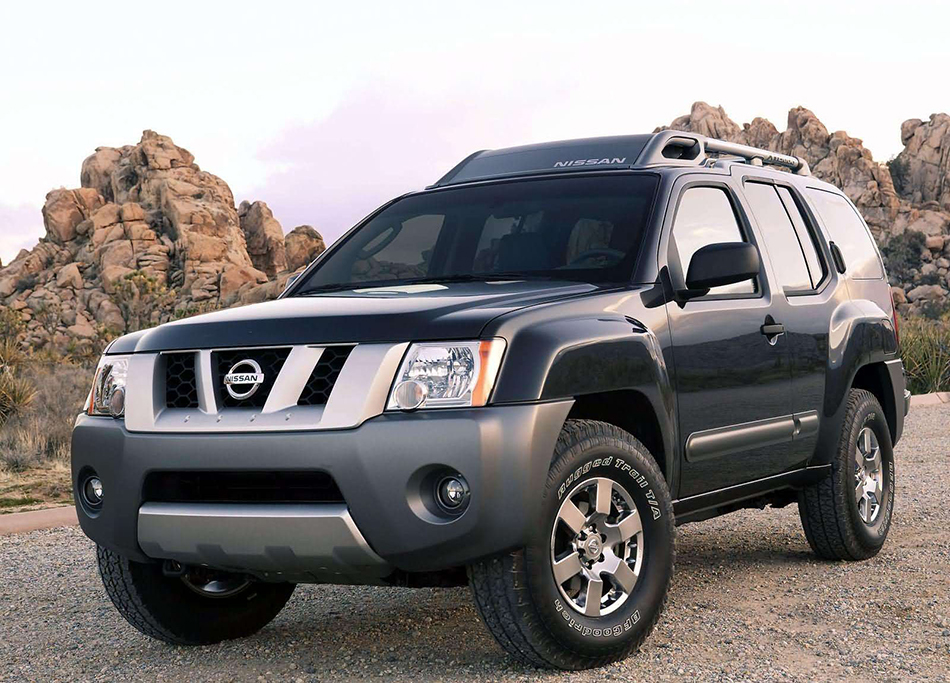 "Xterra was a cornerstone vehicle in launching Nissan's remarkable product revival in the late ‘90s, showing the automotive industry that good things happen when you focus on meeting customers' unmet needs, rather than following the competition. With this new generation design, Xterra still has no equals," said McNabb.

The styling of the new 2005 Xterra evokes that of the breakthrough original design – with more of the same ruggedness and direct function that its designers express as "Xterra DNA." Larger in nearly every dimension, the new look is more exciting, more powerful and more functional.

The 2005 Xterra's wheelbase has been extended two full inches for a smoother ride and greater interior room, yet the overall length is only two-tenths of an inch longer due to a reduced front overhang – which enhances maneuverability in off-road hill climbing and trail situations. The Xterra's width has also been increased by 2.5 inches, while height has increased 1.9 inches.

"Xterra has a very large, very loyal following – owners who love the combination of purposeful styling matched with practical size and functionality. Our task with the new design, which I think we've accomplished, is to update the look without losing any of the original's distinctive character," said McNabb. "You should be able to tell with just a glance that this is the next Xterra."

The "truer" comes in many areas, beginning with more room. Front leg room has been increased nearly an inch (0.9 inch) and front head room over half an inch (0.7 inch). But the real gain is in the second row, where leg room has increased 3.6 inches and head room has grown by 2.3 inches.

Interior flexibility has been enhanced a number of ways as well. The 60/40 split folding stadium-style rear seat is joined by an available fold-down front passenger seat, which creates added utility for hauling long recreational gear. The center console has been enlarged and the glove compartment is now a double deck design. There is also additional instrument panel storage. The Xterra Off-Road model includes unique blue seat fabric.

The cargo area is highlighted by an easy-to-clean luggage area flooring and a total of 10 cargo area utility hooks – six on the floor/sides and four on the ceiling and sides (floor hooks can carry up to 110 pounds). A new adjustable channel system in the cargo floor, similar in design to the Utili-track™ system offered on the new Nissan Titan and 2005 Frontier pickups, makes it easier to secure bike racks and other accessories or gear. There's also an available built-in first-aid kit and space to securely carry up to one-gallon jugs. "The new Xterra's combination of thoughtful cargo area features creates an extremely versatile space for hauling all the things that accompany active lives," said McNabb.

From the beginning, Xterra has differed from many other similarly sized SUVs with its truck-based (rather than car-based) platform, a credential that adds to its proven off-road capabilities. For 2005, the new Xterra features a new platform, a modified version of the "F-Alpha" platform developed for use with the full-size Nissan Titan pickup and Armada SUV.

Powering the new Xterra is a standard 4.0-liter DOHC V6, rated at 250-plus horsepower and 270-plus lb-ft torque (final figures will be announced closer to production). The new engine is an increased displacement version of Nissan's VQ engine series found in the 350Z, Maxima and Altima. It features a longer stroke (than the 3.5-liter version) and has been specifically tuned for SUV and truck applications.

"We expect the new Xterra to offer best-in-class horsepower and torque, with exceptional acceleration and driveability, such as acceleration coming out of a corner," said McNabb. "We've given it the hardware to get the job done, on highways and any paths that lead to adventure."

Like the previous generation, the new Xterra is offered in 4WD or 2WD configurations. The part-time 4WD system includes 2WD/AUTO/4H/4LO modes and electronically controlled transfer case. A Vehicle Dynamic Control (VDC) system is also available, along with other advanced off-road capabilities.

Other standard equipment includes 3-point seat belts for all rear seat occupants, including the center rear position, and the LATCH (Lower Anchors and Tethers for CHildren) child seat anchor system.

A Range of Models

The 2005 Xterra will be offered in a choice of models: S, Off-Road and SE. Each is offered with standard 4.0-liter V6 and a choice of manual or automatic transmissions and in 4WD or 2WD configurations. It goes on sale at Nissan dealers nationwide in early 2005.

The new Xterra will be assembled at Nissan's award-winning Smyrna, Tennessee manufacturing facility. Engines will be supplied by Nissan's nearby Decherd, Tennessee engine facility.

"For 2005, Xterra remains a catalyst for adventure," said McNabb. "With aggressive styling, enhanced off-road capabilities, dynamic performance and its unique multi-flex interior, Xterra once again has it all."