JUKE-R, Nissan's crossbred Crossover, is making its international debut in the high-octane surroundings of Dubai.

The hand-built 485bhp supercar - a fusion of the Nissan Juke and legendary Nissan GT-R - has been chosen to act as the official pace car for the 2012 running of the Dubai 24 Hour sports car race on January 13/14, 2012.

And, while it is in Dubai, JUKE-R will take on - and aim to upstage - some of the world's fastest road cars. A unique film, shot on a purpose-built street circuit within the millionaire's playground of the Dubai International Marine Club, will show JUKE-R pitched against the ‘best of the rest' in a series of head-to-head trials against the clock.

Among the challengers to be faced by JUKE-R will be the monstrous SLR-engined Mercedes SLK of UAE rally legend, Mohammed Ben Sulayem, a Lamborghini Murcielago and a Ferrari Enzo.

The film aims to capture the noise and excitement generated by the muscular JUKE-R, which was created by Nissan Technical Centre Europe and built by world-famous race team, RML. By marrying the Juke's distinctive body with the running gear of the incredible GT-R, Nissan has created what it hopes will be a genuine world-beater. 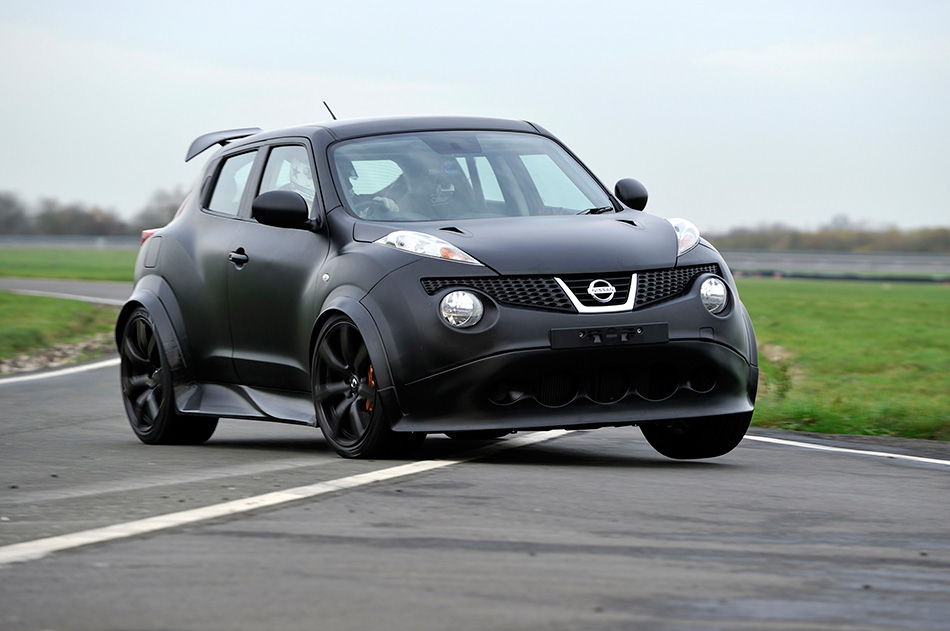 Piloted by the enigmatic Lucas Ordonez, winner of the inaugural Nissan GT Academy in 2008, the sinister-looking matt black Nissan JUKE-R will use the might of its GT-R twin turbo power and advanced four-wheel-drive chassis to put the opposition in its place. Like the cars it plans to beat, JUKE-R is fully road legal.

Built from scratch in just 22 weeks, JUKE-R has captured the imagination of motoring enthusiasts all over the world, with many calling for Nissan to turn the car into a production reality.

Nissan, however, is adamant that just two will be built: one with left-hand drive and the other with right-hand drive, though the reaction to the car does suggest there is appetite for a sporting Juke variant.

Despite its exceptional performance, JUKE-R has been designed to encapsulate perfectly the high-octane, dynamic driving experience of the GT-R on which it's based, as some of the world's leading motoring writers will discover for themselves during January.

"JUKE-R is a remarkable and versatile machine. Packed with Nissan innovation and excitement, it is powerful enough to show the world's fastest cars a clean pair of heels and quick enough to head a field of purpose-designed racing cars around the track.

"But for all of its awesome performance, JUKE-R's 485bhp can be put in the hands of drivers of any experience. We are confident it can live up to its billing and, as those in Dubai will discover, it can and does," said Gareth Dunsmore, Juke Product Manager, Nissan in Europe.

Among the participants in the Dubai 24 Hours, the opening event in the 2012 international motor racing calendar, will be four young graduates from Nissan's innovative GT Academy programme. Established by Nissan and PlayStation® four years ago, the GT Academy has offered a host of computer gamers the chance to move from sofa to race track.

But the 2012 running of the Dubai classic round-the-clock race is the first time a car - a 410bhp race-prepared Nissan 370Z GT4 - has been raced by a team comprising entirely virtual-to-reality drivers.

Lead driver is Spain's Lucas Ordonez, winner of the first GT Academy in 2008. Since becoming a professional race driver, Lucas finished second in the LMP class at the 2011 Le Mans 24 Hours, and won the 2011 Intercontinental Le Mans Cup.