Nissan's planning and design team were given a challenge: to explore new forms of zero emission mobility that redefined existing segments. The result was a radical new vehicle that combines the company's vision for future urban mobility with Nissan's great driving heritage.

In creating the Land Glider concept, Nissan planners and designers have conceived a totally new form of personal zero emission mobility that combines clever, new driving experiences, all in the one compact, 4-wheeled package.

With more than 50% of the world's population living in big cities in the near future, designers latched onto motorcycles as a credible base to start the design process.

While the agility, thrills and freedom of bikes inspired the designers and engineers, an extra spice was added to the mix. Tandem architecture became the obvious choice. A unique two-seater, cocoon-like structure sitting on a zero emission powertrain. With four-wheel stability and a sense of safety that originates from a tilting cabin, the Land Glider will appeal to both two- and four-wheel driving enthusiasts. 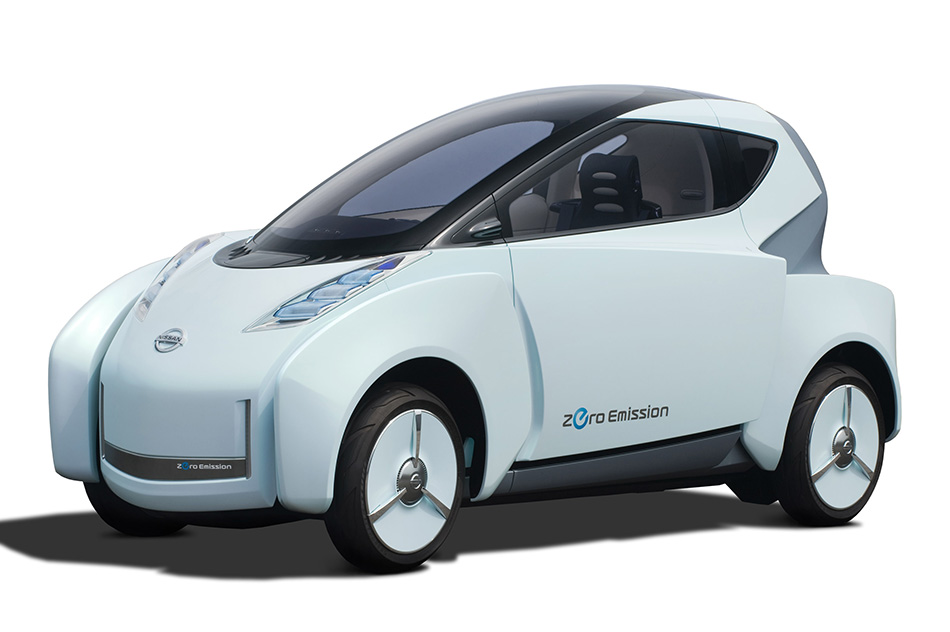 Targeted at city dwellers of all generations, the Land Glider is a serious motoring statement of the new era of mobility that Nissan intends to lead.

"The exterior incorporates a soft, sleek-looking body that appears to be protected by a special armor," explains Takashi Nakajima, Nissan's Project Design Director. "And while it is very mechanical in its nature, the four-wheeler boasts a dynamic body design that almost seems alive. As part of Nissan's expanding zero emission family, the Land Glider exudes a clean, friendly attitude."

The vehicle's two-seater tandem layout is enveloped in what seems like the canopy of a glider, while its unique 'tilt' setup employs a special leaning function that holds occupants firmly in place even when the vehicle is cornering at angles. In developing the Land Glider, Nissan designers have created a two-seater that offers the sense of security of a cocoon, but delivers real driving pleasure.

Described as a 'personal city commuter,' the Land Glider features steering-by-wire and a lean capability when cornering -- like a motorcycle -- that enables the vehicle and its tires to lean by up to 17 degrees. Able to turn sharply at nearly any speed, the Land Glider employs sensors for vehicle speed, steering angle and yaw rate to instantly calculate the level of lean required to negotiate a corner. All the driver must do is turn and the cabin will lean accordingly. By enabling the car to lean, designers have succeeded in minimizing vehicle width and tire tread width, thus achieving a sleek, futuristic look.

With drive coming from two electric motors in the rear powered by lithium-ion batteries mounted beneath the floor, the zero-emissions Land Glider is quick off the mark. The car also features a non-contact charging system that can be charged whilst shopping at a supermarket or stopping at a motorway service station. This system enables vehicles to be charged cable-less at locations where the infrastructure exists.

To ensure maximum safety whilst driving, engineers have fitted a car-robotics style crash avoidance system in which sensors mounted in the body detect other vehicles in the same way as fish swim in schools without colliding. This system directs the vehicle's path away from any obstacles.

Whilst Land Glider is a concept car created for the Tokyo Motor Show, it should not be regarded as a mere design study. This leaning machine gives a clear direction to how a future small car from Nissan could look in congested cities...a clue of what Nissan means by new era of mobility.