Offering purists uncompromising driving excitement, the new Opel Speedster goes on sale in Germany in March 2001. The Speedster is an Opel pioneer in several respects. The two-seater is the brand's first mid-engined sports car and the first Opel to use aluminum and composite materials for the chassis and body. The Speedster is built for driving enthusiasts who will consciously forego creature comforts for the sake of an uncompromised sports car experience. It covers the sprint from zero to 100 km/h in only 5.9 seconds, reaches a top speed of 217 km/h and demonstrates exemplary agility and road-holding on winding roads.

"The Speedster is not just another roadster," says Hans Demant, Executive Director of Opel's International Technical Development Center. "Our first priority with the Speed-ster has always been driving dynamics. The extremely low curb weight of 945 kilo-grams (including the driver), a low center of gravity, the concentration of mass at the center of the vehicle, the racing suspension, the brakes and the unassisted steering, make it an absolute dream to drive on winding roads." 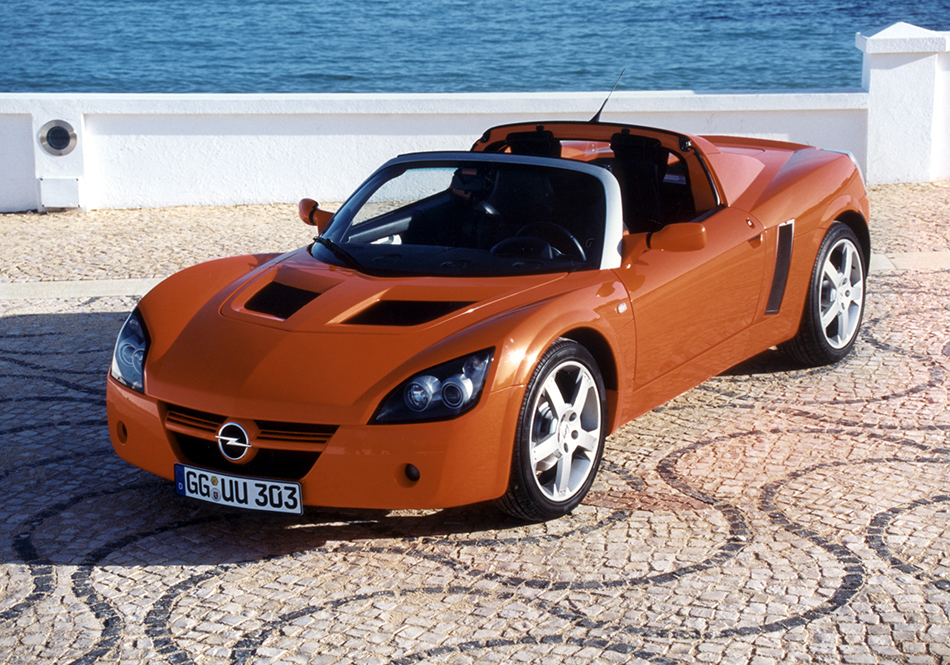 The Speedster's looks are as striking as its performance. Hans Seer, Director of De-sign at Opel: "The lightweight, composite body, is Opel's first production car to bring to life the technically oriented design language we demonstrated on the G90 and Zafira Snowtrekker concepts." The styling is characterized by taut surfaces, muscular wheel arches and sheer flanks. The sculpted, three-dimensional headlamps and tail lights are integral elements of the body shape. The large air intake ducts behind the doors are as striking as the two vertically arranged exhaust pipes. Hans Seer is confident that "the Speedster's dynamic styling will leave its mark on automobile design at Opel and throughout the industry in the years ahead."

The visible, aluminum chassis dominates the minimalist interior of the close-fitting two-seater. Instruments are kept to the bare essentials with a revolution counter and a speed-ometer, plus LCD displays for mileage and fuel level. Sculpted sports seats are complemented by a leather steering wheel, aluminum gear knob and a starter button, all of which underline the Speedster's athletic personality. The optional leather interior is available in black, blue, red or beige.

Although the Opel Speedster's dimensions make it very compact, its proportions are quite different from those of a typical small car. At 1117 millimeters, its roof is ex-tremely low, an impression that is reinforced by the width of 1708 mm and the front and rear tread of 1450 and 1488 mm respectively. At 2330 millimeters the wheelbase is relatively long for a mid-engined sports car while the length, 3786 millimeters, is close to that of the new Opel Corsa. The Speedster's trunk, located behind the engine, is larger than it looks from the outside with enough space (VDA method: 206 liters) for two people's weekend luggage.

Combining a chassis made of bonded, extruded aluminum sections with a composite bodyshell made of bonded panels reinforced with glass fiber is a first for Opel. In this way the engineers achieved the extremely low vehicle weight of 945 kilograms (in-cluding 75 kilograms for the driver) while retaining excellent torsional rigidity and a high-quality finish. Apart from laying the foundations for a high level of active safety, this technology also provides excellent passive safety for the passengers. They are surrounded by the stable aluminum chassis while the driver airbag and pyrotechnical seat belt tensioners provide effective restraint. A "crashbox" made of a stiff, lightweight synthetic structure, similar to the systems used in Formula 1 racing, is used to absorb impact energy in an extremely efficient manner.

The drive-train, too, is characterized by the combination of low weight and high per-formance. The Speedster is powered by the first member of the all-new, aluminum ECOTEC engine generation, the 2.2-liter, four-cylinder unit which drove onto the Euro-pean market in the Astra Coupй in spring 2000. The engine is made entirely of alumi-num and weighs only 138 kilograms (DIN 70020A). In the Speedster the ECOTEC engine produces 108 kW/147 hp at 5800 rpm. Maximum torque is 203 Nm at 4000 rpm, 90 percent of which is already available at 1900 rpm. Opel's new sports car consumes an average of 8.5 liters of premium fuel per 100 kilometers (MVEG) and complies with the coming Euro 4 emissions standard. Integrated into the engine block, two counter rotating balance shafts guarantee extremely smooth running. Maintenance is minimal: only the oil, the oil filter and the spark plugs have to be changed.

The transmission is a five-speed gearbox with high-precision, cable-operated shift. Its three-shaft design makes the gearbox extremely compact.

A plaque on the instrument panel bears the production number of each Speedster, underlining the exclusivity of the two-seater sports car in the Opel line-up. Specialized dealerships will provide correspondingly high levels of service. Throughout Europe about 800 dealerships have been appointed to sell and service the Speedster after first sending their sales and service staff on special training courses and preparing to stock Speedster parts.

The new sports car owes its origins to the concept behind the original Lotus Elise. The decision to cooperate with Lotus Engineering came at a time when Opel was preparing for the biggest model offensive in its 100 years of car-making. It was taken because the philosophy behind the English roadster is very much in line with Opel's own objectives, and because – after the Speedster concept car had been greeted with great enthusiasm at the 1999 Geneva Motor Show – Opel wanted to put the two-seater on the market as quickly as possible. The Speedster is assembled by Group Lotus in Hethel, England, about 150 kilometers north-east of London, where the renowned English sports car specialists and automotive consultants have been building cars since 1967. Opel quality assurance engineers work with their counterparts from Lotus to make sure that the company's guidelines and processes are applied to the production of the Speedster. In addition, cars undergo a pre-defined test drive on the race-track adjacent to the plant before being released to the customer. Opel's confidence in the quality of its new two-seater sports car is further underlined by a ten-year anti-perforation warranty.

Alain Uyttenhoven, Opel's Executive Director Brand Management, calls the Speedster "the embodiment of pure driving excitement, a real driving machine with fascinating design and a focus on agile handling. It conveys just the kind of exhilaration that our customers can expect to feel more of in the future."