Brilliantly versatile, with generous interior space and modern design within its compact overall dimensions: these were the criteria applied by Opel when developing the new Meriva. This five-seat minivan is in a smaller model category than the Zafira, but should have no difficulty in equaling its success. The Meriva's innovative "FlexSpace concept makes it possible to arrange the rear-seats and load area to suit individual transport needs – without having to remove any seats. Starting in January 2003, the Opel Meriva will be built in Zaragoza, Spain, after its world premiere in a few weeks' time at the Paris Motor Show it will reach the market in spring.

"The new Opel Meriva is a perfect example of the creativity of our designers and engineers, Its interior space is unequaled in this class – combined with exceptional versatility that sets new standards," said Opel's Chairman and Managing Director, Carl-Peter Forster. He also pointed out that this new minivan is of major strategic importance. "The Meriva doesn't fit into conventional market segments. This is right in line with our new product philosophy. We expect the market for vans like the Meriva to grow to 500,000 units in Europe in 2005. The Opel Meriva will take a big slice of this cake, repeating the resounding success of the Zafira." 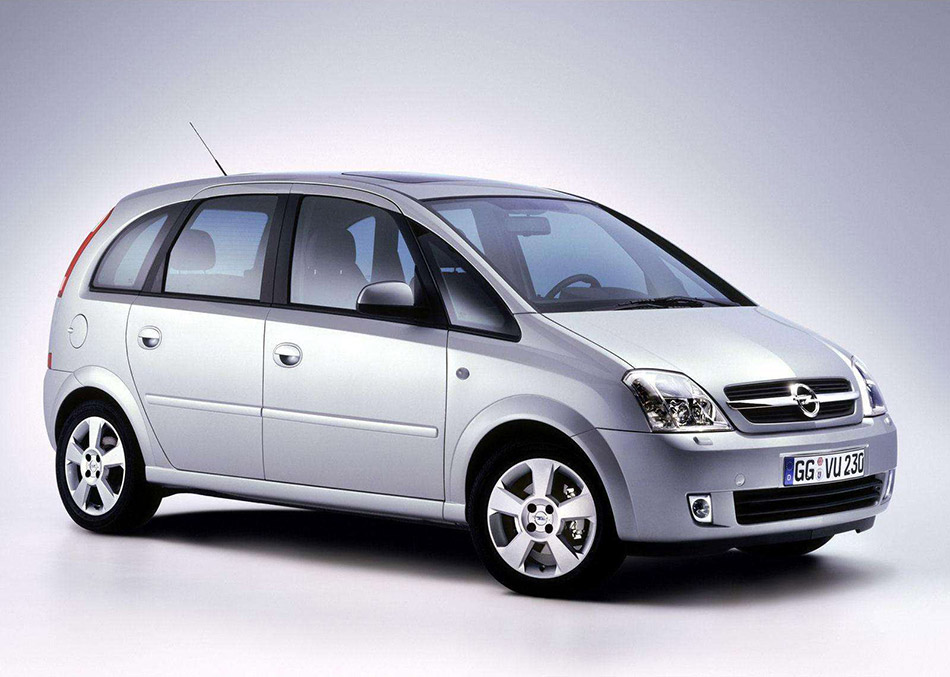 The Meriva will be launched with a choice of 1.6- to 1.8-liter diesel and gasoline engines developing between 55 kW (75 hp) and 92 kW (125 hp). But without a doubt, a totally new rear seat system is its most outstanding feature. In the regular five-seat configuration, this front-wheel-drive model has three rear seats or, for extra comfort, the two outer seats can be used and moved back to their rearmost positions. The Meriva then becomes an exceptionally spacious four-seater with legroom and width at shoulder height comparable to that found in many midsize automobiles. If, on the other hand, additional storage space is needed, the two individual outer seats can be pushed forward either separately or together – or lowered completely into the floor – and at the same time the center seat folded away. Even with the Meriva's passengers enjoying this high standard of traveling comfort, there is ample storage space. With five seats in use, the Meriva's load area still holds some 490 liters, far more than a conventional compact car could accommodate. Transforming it into a two-seat van is just simple, and results in a load area almost 1.70 meters long with a capacity of more than 1300 liters.

This brilliant concept means that the interior can be re-arranged in a manner ideally suited to a variety of purposes, bearing in mind that compact cars are often used by only two people, or even the driver alone, and seldom have to carry more than four occupants. The key to this exceptional versatility is the Meriva's long wheelbase: at 2630 millimeters it almost matches that of the larger Zafira (2694 millimeters). The difference in overall length is more marked: the new model is 4042 millimeters long and therefore precisely 275 millimeters shorter than its ‘big brother'. In terms of overall width (1694 millimeters) and height (1624 millimeters) the differences between Meriva and Zafira are 48 and 56 millimeters respectively.

"The Meriva is a completely new design. Development started on a blank sheet of paper. This was the only way to realize such exceptional interior flexibility. The result proves once again that, in comparison to the competition, our engineers play a leading role worldwide when it comes to packaging," said Hans H. Demant, Executive Director of Engineering at Opel.

The starting point for optimum utilization of the available space is the firewall between the engine compartment and the passenger compartment. "The firewall is the most expensive sheet-metal stamping in the car's entire structure, and the most important too, since all the other packaging decisions depend on this basic element," Frank Leopold, Group Leader Vehicle Concepts, said. "In all our models we try to move the firewall forward as close to the front axle as possible, so that we gain a few more valuable centimeters in interior length," he added. The so-called ‘comfort' dimensions determine the second benchmark. "We regard certain distances from the steering wheel, the pedals, the dashboard and the door trims, and the related angles, as typical of an Opel and try to retain them in all our model lines," he noted. In vans like the Meriva, which have a higher roof than conventional passenger cars, the seat occupant's hip point, which governs the seated position, is moved up and the seat back set at a slightly steeper angle. The decisive factor is in fact the angle at which the occupants look out over the engine hood. Whatever the driver's stature, it's obviously important for him or her to be able to see the road ahead of the car and traffic lights mounted overhead at a intersections – no matter how short or tall they are. Leopold sums up as follows: "To make sure that both requirements are fulfilled, the windshield has to extend up higher into the roof and the dashboard has to be positioned appropriately," Leopold also said.

The ‘vehicle architects' lay down these requirements, and the proportions of a minivan such as the Meriva – which is very compact – are then finalized. The stylists had to come up with a dynamic basic shape and at the same time advance Opel's characteristic design language. "There are curved surfaces full of tension between the sharp outlines: A light-line along the side gives vigor to that view of the body by conducting the eye along from the headlamp to the rear. Our own graphic style with four side windows has been adopted," explained Opel's Executive Director of Design Martin Smith. The light defractors accentuate the chassis's shoulders and, together with the boldly flared wheel arches, gives the Meriva even greater visual presence.

This is also the key to the new model's strong identity. "When you see a Meriva in the mirror, you know immediately that it's an Opel. You register the trapezoidal pattern of the engine hood with its central swage line, the technical style of the headlamps and the distinctive chrome trim strip and lightning flash," said Friedhelm Engler, the Meriva's Chief Designer. Seen from the rear, the Meriva is equally impressive. The elevated rear lights are integrated into the rear roof posts, the tailgate is neatly designed, with a large panel area, and extends well down into the bumper; it is accentuated by a step formed in the lower area and the cutout for the license plate is positioned below the bumper.

Although it is very compact, the Meriva communicates an immediate impression of space. This is due to the short body overhangs, the slim, curved roof posts and the gently sloping curve of the roof behind the B-pillar. The additional front windows add to the sense of clarity and give the front seat occupants an additional feeling of brightness and space.

The Meriva's uncomplicated, dynamic looks and its clear, high-tech geometry are also found inside. Opel's designers have devoted a great deal of effort to choosing the most suitable materials and ensuring good workmanship in every detail. "When it comes to interior quality and visual appeal, the Meriva matches the high standards that were first inspired by the Vectra. We are especially proud to have achieved this in a compact van," Martin Smith said.

The cockpit, curved to create a slightly wavy effect and finished entirely in a calm shade of dark gray, is neatly and clearly laid out. An arched hood covers four circular dials of sport-style design for the fuel gauge, tachometer, speedometer and coolant temperature readings. The ‘Triple-Info' display is located at the center of the instrument panel. A gently curving line separates the inner section of the cockpit from the peripheral zones, and a lateral chrome trim strip creates a bold horizontal dividing line. "The Zafira has already shown us that a highly practical vehicle can still look attractive and dynamic. In my view, the Meriva does an even better job of proving this," Smith said.