For the third edition of the Peugeot Design Competition, enthusiasts of automotive styling from all over the world were invited to design the Peugeot of their dreams for the near future. After the future of 2020 and retro-futurism, participants this year were asked to express their vision of the Peugeot they would like to drive. A Portuguese designer, André Costa, won the competition with his project the Moovie, an agile
and environmentally-friendly city car.

At the last Geneva Motor Show, André Costa was awarded the « La Griffe » trophy by Frédéric Saint-Geours, the Chief Executive of Automobiles Peugeot. But it is at the Frankfurt Motor Show that the competition's most emblematic prize is unveiled on the Marque's stand, in the form of a scale 1 concept car, built in accordance with the winning project. Not forgetting a new feature of this third edition: the mass production of the winning project in the form of a… 1/43 scale miniature.

This now traditional event offered by Peugeot to the community of designers has met with real success and last year set a new record for the number of entries it attracted. Indeed, with 3,800 projects registered on the www.peugeot-concours-design.com site, the number of entries was up by 36 % compared to the 2002 event.The competition also confirmed its international credentials with 2,600 designers from 107 countries, against 90 for the previous edition. 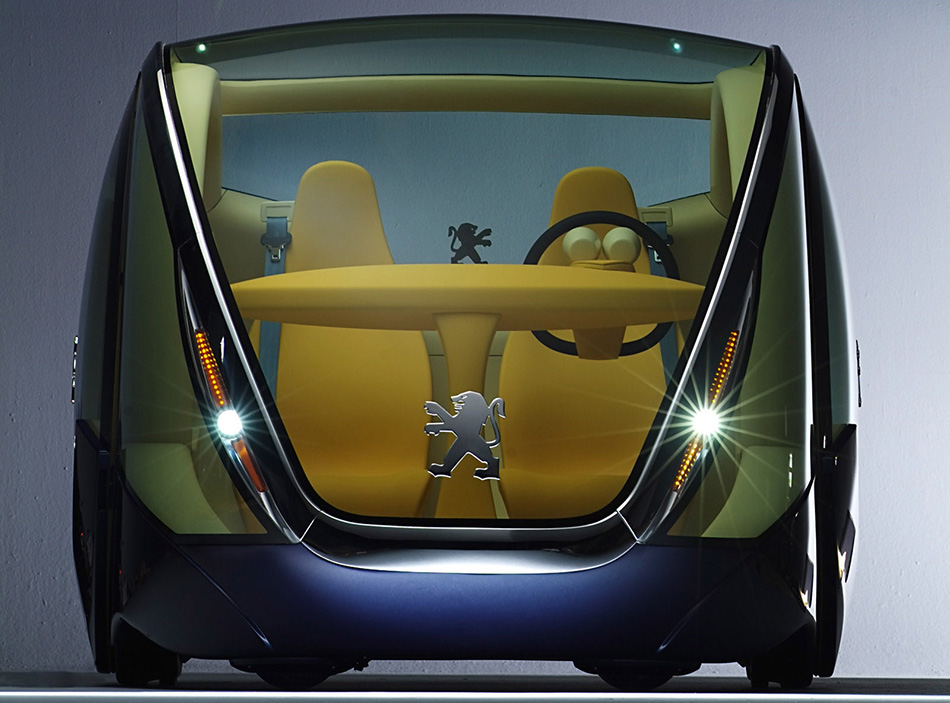 The reasons for the choice

This attractive two-seater city car concept won favour with the majority of members of the panel of judges chaired by Frédéric Saint-Geours.The judges voted for the Moovie on account
of its original style, expressing a clear allegiance with the Marque, and its many innovations which make it a genuine future prospect. The Peugeot likeness is shown subtly, since André Costa cleverly used the U, which usually frames the lion on the front of the Marque's models.This presentation is even more astute, since here the U structures the passenger compartment, connecting the generous front windscreen to the rear windscreen in a single line.

The vehicle also features numerous innovations. Its doors, which house the rear wheels, have
a dual function.The first allows easy access to the passenger compartment, thanks to two swivel doors.The second reduces the energy consumption required to drive the Moovie, thanks to its large wheel dimensions. In addition, the Moovie is exceptionally agile under all circumstances and can be driven easily in restricted spaces thanks to the two spheres located at the front. André Costa, aged 23, an industrial design student in Lisbon, had already taken part in the first edition of the competition. His Moovie concept was driven by a twofold motivation: ease of use in an urban setting whilst remaining environmentally-friendly.

The Moovie was built under the supervision of the Peugeot Style Centre, according to criteria normally used for the construction of vehicles intended for a Motor Show.Three months' work was required, from the digitization phase to the final model exhibited at the Frankfurt Motor Show. In the absence of three-dimensional drawings, it was necessary to give proportions to this project, for the exterior and interior, that conformed to the general idea mooted by André Costa.

Digitization of the vehicle as a whole and its component parts made it possible to obtain a precise 3D image of the Moovie.This phase was essential, making it possible to determine the car's reference data – length, width and height, as well as its architecture. Using this data,
a 1/5 scale reference model was produced, giving body to this virtual reality. Once the model was approved, production could begin. Production starts with the machining of a scale 1 model.This high-density foam model is produced on the basis of digital specifications. Its purpose is to give substance to the volumes and allow necessary adjustments to curves and radii, to give the body a curvier finish.

The physical medium allows the production of resin moulds.The six moulds needed to produce the body are then assembled and lined with epoxy resin. Used in the mass production of cars, this 3 mm thick resin has mechanical properties guaranteeing excellent rigidity. At the same time, parts such as the headlights, seats and fascia panel are also moulded. The sidelights and headlamps use polycarbonate, while the casing relies on the technique of nylon sintering.The colour of the parts is obtained by plexiglass cut from a solid block. The seats consist of two epoxy half-shells assembled on a steel chassis. The fascina panel is made of high-density foam, milled from a solid block.

The different body parts are then assembled. This stage is the longest, since it necessitates a high level of precision: parts are lightly reworked, certain assembly procedures are modified. The generous glazed surface area of the Moovie is made of polycarbonate. Before being installed on the body, this thermoformed part is adjusted with meticulous attention to detail. The paint is applied in two stages. A polyurethane primer thinned with water is applied first, allowing final corrections to be made to the body.Three different paint pigments are then applied, the final aspect being given by the varnish: brilliant for the body, soft for the interior. The Moovie can now receive the Marque badge.The lion is made in stereo before being chromeplated.

The bright, elegantly styled passenger compartment generates a feeling of well-being. The plunging front windscreen and generous polycarbonate glazed surface area ensure a high level of brightness in the passenger compartment whilst accentuating the sense of space.The lines are soft, in perfect harmony with the two yellow pigments used for the interior. The two-tone fascia panel with its smooth lines is mounted on a slightly curved central pillar. Free of all rough edges, it houses an instrument panel consisting of two tonneau-shaped counters and a single-spoke steering wheel.The two one-piece seats incorporate an on-board seat belt.