In 1998, the concept-car 20? was presented for the first time. The enthusiasm it aroused among the public fuelled the development of a new mass-produced car design: the Coupé / Cabriolet.

Combining vision and realism, the 206 CC - the fi rst vehicle in the "small car" segment to have a metal electric folding roof - met with well-documented success and was then followed in the higher segment of the Peugeot range by the 307 CC. With the launch of the 207 hatchback, Peugeot's designers naturally considered including a "CC" version in the new range, and applying all their expertise in the field of "vehicles styled for pleasure".

With the "207 " concept car, the Marque for the one part lifts the veil on a tangible future product. However, its personality is twofold: in addition to twin coupé / cabriolet adaptability, this styling blueprint also conceals an example of future fuel cell technology for a more distant future... 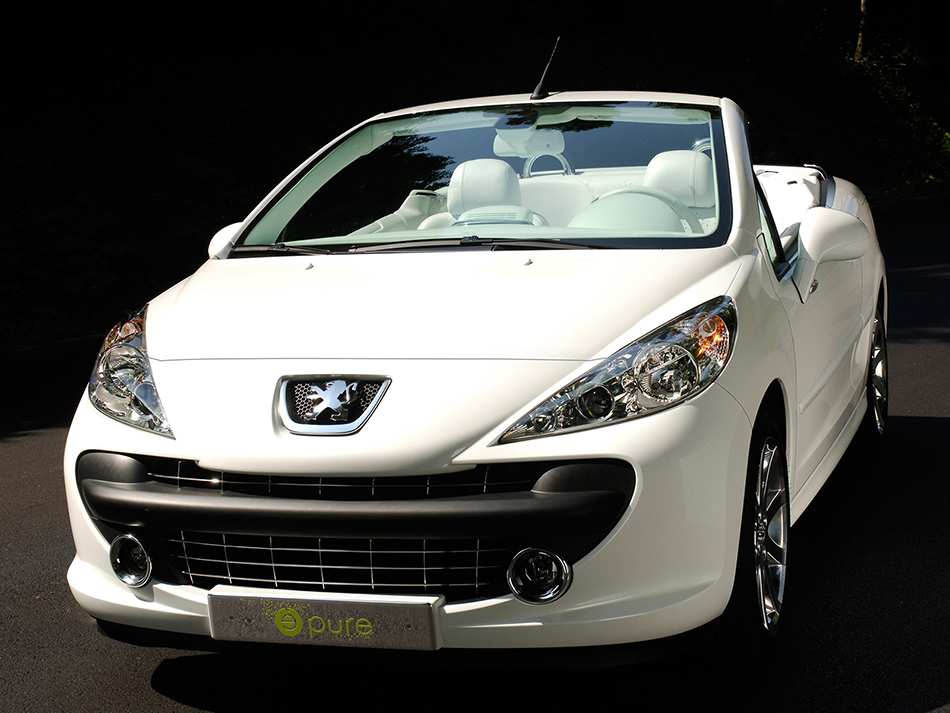 The experimental power train that equips the 207 includes the latest advances of the PSA Peugeot Citroën group in this area, without any adverse affect on the vehicle's functional and stylistic features.

The spirit of freedom inherent in this design is therefore closely bound up with the car's method of propulsion: the ensuing benefi ts - zero emissions, silent operation - which does much to enhance the pleasure of driving the car as a cabriolet. Both driver and car are then truly at one with their environment. Pleasure and ecology are united.

The "pearl white" livery highlights the purity of the concept car's lines while symbolising the ecological credentials of the technology that powers it. The familiar, elegant and expressive design of the front of the 207, is strengthened by its bold and fl owing contours.

From the side, the high waistline at the rear creates an effect which, combined with the angle of the front windscreen and the "arch" of the closed roof, enhances the car's dynamic presence by creating a sense of movement, even when it is stood still. The sculpting of the lower side panels adds further to the overall personality of the vehicle. Its special "Pitlane" alloy wheels strengthen the impression of a vehicle with superb road holding.

Chrome detailing circumvents the perimeter of the passenger compartment and includes a bold styling feature, located on top of the boot lid, helping to enhance the fluidity of the design of the rear of the car. Extending from the boot lid, the rear spoiler, with its pronounced integrated shape, blends harmoniously into the rear diode-effect lights. Meticulous surface fi nishes, eloquent style lines and perfectly balanced proportions give the vehicle the natural equilibrium, elegance and dynamism sought after by its designers, whether it is a coupé or a cabriolet.

The interior expands on the theme of purity expressed by the exterior. The fascia panel of the 207, originally smooth and fl uid, is covered entirely with white leather, as is most of the passenger compartment: the detailing, the trim on all four seats, and even the controls under the steering wheel. The white dials of the instrument panel and the chrome trims strengthen the modern and technological feel of the interior. Touches of "absinthe green", inspired by the vehicle's fl oor colour, are subtly interspersed throughout the passenger compartment, particularly in the form of discreet beads on the fascia panel, the door panels, the rear of the front seats and the head restraints. This colour also appears in the perforations of the seat leather, like little bubbles of oxygen, echoing the vehicle's ecological method of propulsion. This harmony between white and mineral tones further accentuates the sensation of freedom, relaxation and energy that emanates from the car.

From a functional point of view, the instrument panel incorporates all necessary information for monitoring the charge level of the battery and the quantity of on-board hydrogen, while the colour display in the centre console

The strategy of PSA Peugeot Citroën

In a global context where the need to consume less energy and reduce CO2 emissions is paramount, the PSA Peugeot Citroën group is continuing its technological research into clean and economical vehicles. In addition to work on improving the effi ciency of internal combustion engines, particularly with HDi engines, the ability of the Group's engines to run on fuels that incorporate biofuels, the invention of the DPFS (diesel particulate fi lter system) and research into HDi Hybrids, PSA Peugeot Citroën is also studying "future technologies". For example, the hydrogen fuel cell could represent a high-potential energy source for the future.

This technology, however, still has to overcome a number of technical and economic challenges before large-scale production can be envisaged.

PSA Peugeot Citroën has therefore adopted a research strategy which aims to explore different solutions. This work has therefore given rise to the production of a succession of demonstrators.

Operating principle of the fuel cell electric propulsion system To operate, a fuel cell needs hydrogen and oxygen. Oxygen is drawn from the air, while hydrogen is stored on the vehicle. The combining of these two elements creates an electrochemical reaction that causes a displacement of electrons and protons which simultaneously produces heat, water, and above all electricity.

The 207 , like previous demonstrators, uses the fuel cell as a source of on-board electrical energy (increasing the maximum distance the vehicle can travel - "range extender"). It powers the electric motor (propulsion system) directly as well as helping to recharge the batteries.

For the fi rst time on a demonstrator, the 207 uses a GENEPAC fuel cell. Combining simplicity and modularity, this French designed cell has been designed to be compact in installation and effi cient in use.

The principle of this new cell, featuring PEMFC (Proton Exchange Membrane Fuel Cell) technology, is based on the use of thin, stamped stainless-steel plates, which reduce the cost and volume of the cell compared to traditional plates.

This system also allows for simple gauging of the cell's power. For example, the cell used on this demonstrator, called the "GENEPAC 20", is a 20 kW version of the GENEPAC system. The, "GENEPAC 20" consists of two modules each with a stack of thin plates and an assembly of electrode membranes. This fuel cell system therefore offers a level of effi ciency in excess of 50 % versus 25 to 30 % for an internal combustion engine.

Five cylinders containing 3 kg of hydrogen compressed to 700 bar provides the electric motor and the "lithium-Ion" battery with as much extra power and range as possible. They are located at the bottom of the vehicle's boot, which frees up the two rear seats, does not affect the operation of the retractable roof mechanism and leaves part of the boot available for use in the coupé position.

Use of an electric motor allows the "207 " to consume energy only when in motion and to save energy during phases of deceleration. It also makes this demonstrator silent, an important quality for a vehicle driven in town and highly benefi cial during use as a cabriolet.

The PAC technologies give the "207 " demonstrator a considerable range (around 350 km) while offering a pleasing level of performance with a maximum speed of 130 km/h.

Helping to preserve pure air by emitting only water, this 207 of the future is therefore well suited to urban and semi-urban use... For "pure sensations", original and purposeful!