Porsche is presenting the Panamera Sport Turismo concept car to show how amazingly intelligent and efficient drive technology might look in the design language of tomorrow. The Sport Turismo unites the next generation hybrid drive with new ideas for an evolutionary, sporty body concept; it combines Porsche performance with comprehensive everyday practicality.

The body concept of the Panamera Sport Turismo is an outlook on a possible Porsche sports car of tomorrow: The overhangs are short, and the boot lid is large – both sporty and functional. The concept car combines the dimensions of a premium vehicle with the interior comfort of the luxury class. The Sport Turismo is 1,990 mm wide, a low 1,401 mm in height and 4,950 mm long. Its direction indicators and sidelights are integrated in C-shaped lighting units – known as C-Blades – mounted in the large air inlets at the front end. Together with four-point LED headlights in an innovative design, they define the front end appearance of the concept car. 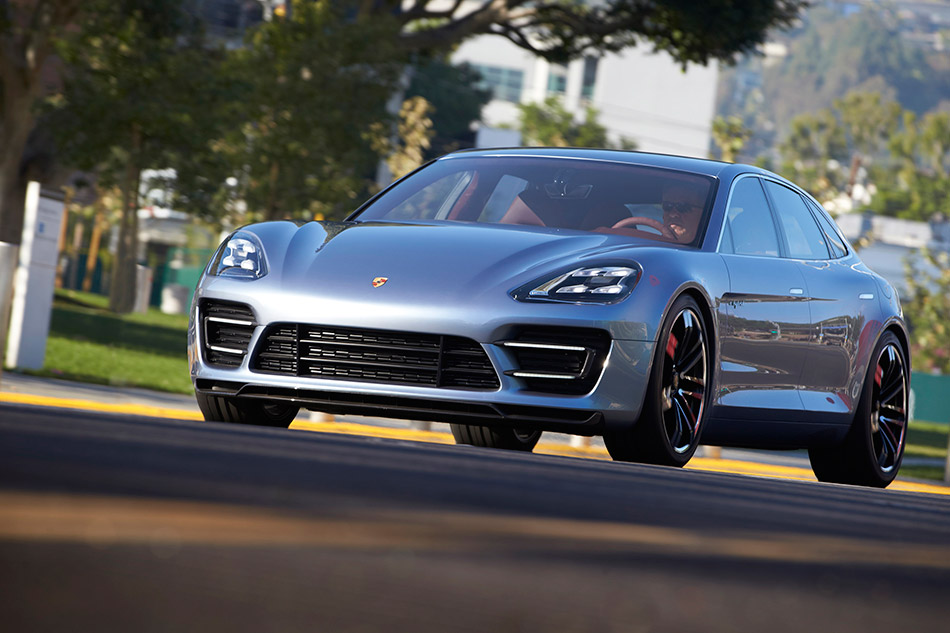 The smooth and taut exterior skin is not interrupted by add-on parts – there are no conventional exterior mirrors. In their place, the Sport Turismo has two cameras mounted in the side air outlets whose images are shown on the displays in the cockpit. The rear body has been completely reshaped, yet it retains all of the characteristics of a Porsche. The rear lights in LED technology and the tail-light panel with the "Porsche" badge are sculpted in three dimensions, and the brake light is positioned between the four-point LED rear lights. Forming the roof termination is an adaptive carbon rear spoiler that produces improved downforce.

The new Liquid Metal Blue colour gives the concept car a surface that resembles liquid metal and highlights its contours and design lines more distinctly. The wheels in dual-spoke design have a bi-colour look, and the brake callipers are painted Acid Green. The hub locks of the wheels recall the origins of every Porsche – which is motorsport. "e-hybrid" badges on the sides refer to the car's drive concept, while the name "Sport Turismo" at the rear, Concept car Panamera Sport Turismo 1 framed in the same Acid Green colour, emphasises the car's concept character. The milled aluminium battery housing is mounted under the boot floor, which is made of electrochromatic glass and reveals a view of the energy source illuminated in Acid Green at the press of a button.

The drive technology of the Panamera Sport Turismo completes the next development step towards the plug-in hybrid, symbolised by the "e-hybrid" badge on the front wings. The car's new ability to be charged from the electrical power grid has been combined with even higher performance components. The concept vehicle with its 416 hp (306 kW) of peak system power is designed to be driven in pure electric mode up to a speed of 130 km/h and can cover distances of over 30 km. The Sport Turismo also exhibits impressive fuel economy per the NEDC standard; its combined fuel consumption is less than 3.5 litres per 100 km, while CO2 emissions are under 82 g/km.

The drive system of the Panamera Sport Turismo is an advanced development of the parallel full hybrid that Porsche already implements today in the Panamera S Hybrid and Cayenne S Hybrid. The new electric motor produces about 70 kW (95 hp), which is around twice as much as in today's Porsche hybrid drive, while the three-litre V6 supercharged engine still produces 245 kW (333 hp) here. In their interplay, they accelerate the concept car from zero to 100 km/h in less than six seconds.

The electric power pack of the Sport Turismo e-hybrid consists of a lithium-ion battery whose performance is several times that of the nickel-hydride battery currently used in production, although it has practically the same dimensions. Its 9.4 Kilowatt-hours of energy storage capacity and high peak power enable faster acceleration, longer electric driving range and higher speeds when driving without the internal combustion engine.

The default operating mode of the e-hybrid prioritises all-electric driving, but the driver may deactivate this by pressing a special button on the steering wheel. In addition, when the car is being operated in hybrid mode the driver can select the e-charge mode by pressing the steering wheel button to intentionally intensify charging of the high-voltage battery.

This is especially useful when one section of the driving route on a motorway is followed by a section through a city that should be driven in pure electric mode without local emissions. In the e-charge mode, the internal combustion engine charges the battery by load point shifting, while satisfying rational energy management criteria.

As a plug-in hybrid, the fluid-cooled lithium-ion battery is not only charged while driving; it can also be externally charged within 2.5 hours (depending on the power supply) via a charging interface on the vehicle. Porsche systematically thought through all aspects of the concept car's plug-in system; it utilises a universal charger (AC) that is wall-mounted in a home garage and has a standardised charging plug.

Familiar and yet completely new: touch displays for instruments and controls

The interior of the Sport Turismo is a forward-looking interpretation of purist sports car thinking: as little as possible and as much as necessary. Instead of classic instruments, a large central TFT colour display is positioned in front of the driver; it is used to call up and display any vehicle information as needed – from the tachometer to driving data or navigation. Two monitors, one to the left and one to the right of this display, show images from the "exterior mirror" cameras. Two additional displays in tube form provide information on the hybrid-specific driving states, e.g. pure electric driving, as well as other functions. The power meter in the instrument panel illuminates in Acid Green and shows the combined system power of the two drives. 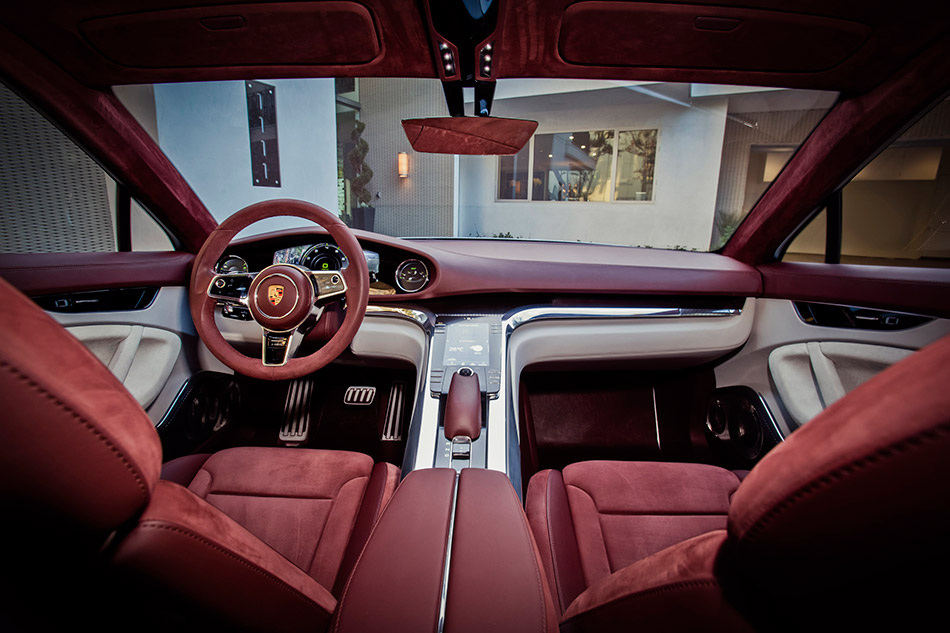 A press on the touch-sensitive colour display starts the e-hybrid. Naturally, on the side that is typical of a Porsche: the left side. A completely new type of touch display in the ascending centre console incorporates additional controls; this is the control centre for the e-hybrid and all other functions that is implemented in black panel technology. It offers the driver the option of influencing the hybrid drive via smart keys to choose maximum driving fun, Concept car Panamera Sport Turismo 3 maximum performance or maximum efficiency. All driving indicators and control functions are also intuitively operated by multi-touch functionality, such as automatic climate control, seat adjustment, lights, reversing camera and the functions of Porsche Communication Management (PCM).

The Panamera Sport Turismo gives the driver entirely new options for customised communications. The driver can use mobile online services to access and control all key vehicle information with a smart phone app. Charge control by mobile phone shows the user just how much electricity the battery has already stored at any given time and predicts how much more time the charging process will take. In addition, there is a charging timer with user-defined charging times. Moreover, the vehicle's interior can also be preconditioned by mobile phone, e.g. by turning on the air conditioner, and the vehicle will already be at the right temperature before driving with electricity supplied from a household electrical outlet.