When it comes to justifying the millions of money spent on participation in racing se-ries, many manufacturers love to praise and highlight the technology transfer from racing sports to standard production. This is of course, not always easy to understand for viewers following events on their television screens or spectators at the racing circuits; yet there are several examples of parts and technologies tested in racing sports that are installed in serial vehicles a short while later. At Ingo Noak Tuning, people were so fascinated by the RSR bodyworks that are so popular in long-distance sports with their distinctive wide bodies and aggressive rear part that they came up with the idea of developing a similar variation for installation on the serial Porsche 997 models. 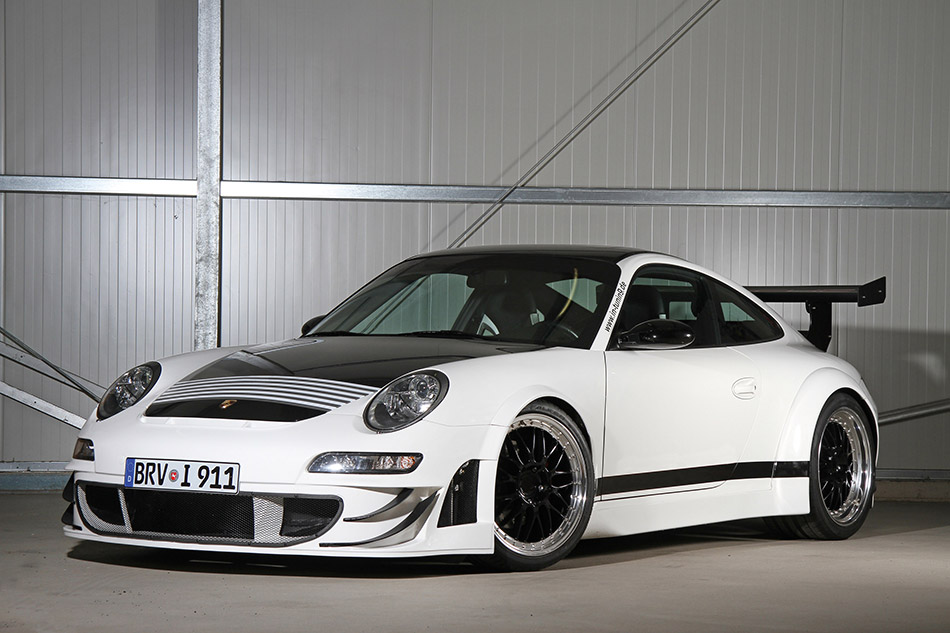 The wide body kit emerged in domestic production and transformes every 911 (con-struction series 997 until the construction year end of 2006) into a real unique copy of the racing sports looks. A completely new bumper bar with massive ventilation shafts and side cup-wings made of carbon fiber thus account for a perfect racing sports optics. Ingo Noak fitted the 997 with a massively wider status through the enlarge-ment of the front fender and the rear wheel housing. The front and the rear are joined together by a specially developed side skirt. The rear appears brawny and endlessly broad thanks to a completely new rear bumper bar with side ventilation openings, a cup flap, and a big rear wing including air-ram engine cover. The highlight on the rear is surely the centrally positioned space for the sports exhaust system made of stain-less steel with its two end-pipes of 90-millimeter diameter. The end-pipes were posi-tioned to look like a diagonally-laid muffler has been installed.

Of course the space created in the fender will have to be filled true-to-specie. In this case, Ingo Noak opted for the classical racing sports rims in multi-part looks: front in 8.5x19 inches with 235/35R19 and the rear in broad 11x19 inches with 305/30R19. To create a perfect blend of the rims with the edges of the fender, there were also even more significant toe enlargements with a width of 60 in front and in the rear, even 120 millimeters per axle. To be sure that the wide-body does not only look sporty but can also be moved in a dynamic manner, the specialists from far up northern Germany relied on the racing sports competence of KW. The KW coil-over kit of variation 3 thus offers hundreds of compression and rebound adjustment options and also has special compensation tanks on the spring strut. The driving behavior can thus be individually adapted at all times, to the needs of the driver and the terrain.

There were also minor touch-ups in the interior of Porsche 997 such as a painted center console and specially converted sports seats in leather/carbon combination including back rest made of carbon.