The two most powerful and fastest mid-engine sports models from Porsche are ready and raring to go: with uprated engines and excellent PASM chassis the Boxster GTS and Cayman GTS set new benchmarks for sportiness in their segment. The independent front and a modified rear end, blackened bi-xenon headlights - with the Porsche Dynamic Light System (PDLS) as standard - and exterior lettering in silky black gloss are subtle yet unmistakable features of the new top models. The name says it all: at Porsche "GTS" stands for Gran Turismo Sport and has promised outstanding Porsche performance ever since the legendary 904 Carrera GTS dating back to 1963. With the new two-seaters Porsche is renewing its commitment to authentic sports cars for both the racetrack and everyday use. 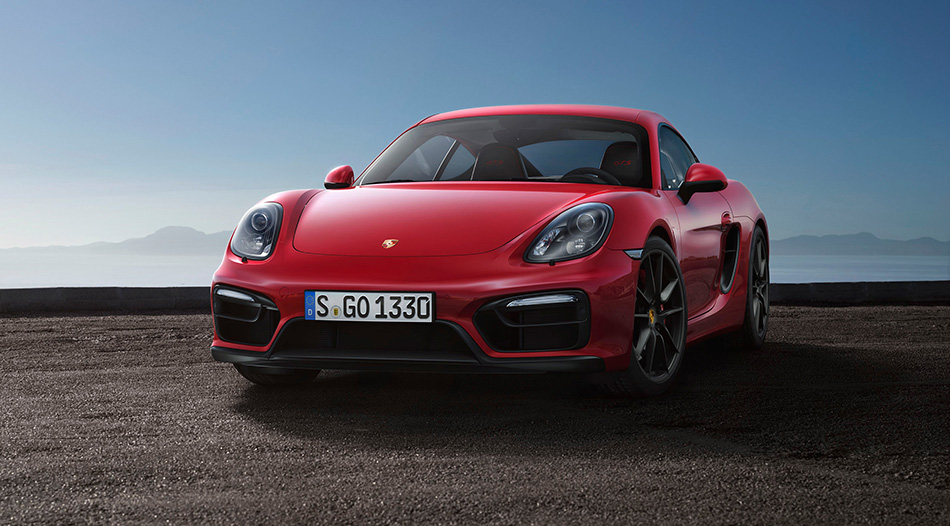 The six-cylinder boxer engines fitted in the new top models are based on the 3.4-litre engines from the Boxster S and Cayman S respectively. Thanks to optimised fine tuning they now deliver an additional 15 hp (11 kW). This means that the Boxster GTS now has an output of 330 hp (243 kW), whilst the Cayman GTS delivers 340 hp (250 kW). The torque has also increased by ten newton metres in each model. What's more, the Sport Chrono package is a standard feature in both mid-engine sports cars. This means that in conjunction with the optional Doppelkupplungsgetriebe (PDK) and the active Sport Plus button, the Boxster GTS sprints from 0-100 km/h in 4.7 seconds, whilst the Cayman GTS is even a tenth of a second faster. Both vehicles therefore set new reference values.

As regards the maximum speed - measured with the standard manual six-speed transmission - the Boxster is the first of the new premium roadsters to top the 280 km/h mark, achieving a speed of 281 km/h. At 285 km/h the sports coupé is even faster. The new top models are the first mid-engine two-seaters from Porsche to be certified according to the Euro 6 standard, and with this measuring method they achieve an overall fuel consumption with PDK of 8.2 l/100 km (9.0 l/100 km with manual transmission).

The Boxster GTS and Cayman GTS combine top driving dynamics with the typical Porsche spread with undiminished ride comfort and exclusive features. For example, the combination of PASM and the Sport Chrono package as standard enables the driver to switch between progressive sportiness on the one hand and long-distance comfort on the other hand at the press of a button. The tyres measuring 235/35 at the front and 265/35 at the rear on 20-inch Carrera S-wheels provide the perfect setup for both. Both two-seaters come with sports seats and leather interiors as standard. Like other GTS models from Porsche they are refined with Alcantara elements.

With the new models Porsche is now extending the GTS principle to the Boxster and Cayman. Like the Cayenne GTS and Panamera GTS, these are extremely sporty top models that stand for superior driving dynamics in their segment. The combination of letters originates from the 904 Carrera GTS, a race car dating back to 1963 that could also be registered for use on public roads. In the 1980s and 1990s the 924 GTS and 928 GTS cultivated this principle. It was reborn in 2007 in the form of the Cayenne GTS, and was subsequently also implemented in the 911 series and the Panamera.

The new models will be launched from May 2014. With country-specific equipment and VAT the Boxster GTS costs €69,949 and the Cayman GTS costs €73,757 in Germany.