A renewed version of Renault Koleos is to be released later in the year. The chief changes concern the model's exterior styling and interior trim, plus appreciable CO2 and fuel consumption savings in the case of its diesel engines. The model reasserts its high-end status by building on the strengths that were widely acclaimed at the time of its launch in 2008, namely its remarkable comfort, versatility and modularity, as well as the speed with which owners are able to familiarise themselves with their new car.

The front end of Koleos has been revised with a view to reasserting its forceful character. The air-intakes positioned either side of the Renault logo on the previous version have made way for an elegant chrome grille, while the dynamism of the model has been reinforced by new, slimmer headlights. The more modern door mirrors now incorporate LED indicators.

The side view expresses the robustness associated with the world of 4x4 motoring thanks to cues such as high ground clearance, prominent wheel arches and new, modern, sporty wheels. The initial version's distinctive rear-end styling has been carried over, including the steeply-raked rear window which suggests forward movement and provides the model with a particularly original stance. New Renault Koleos will also be available in a new dynamic body colour: Cayenne Orange. 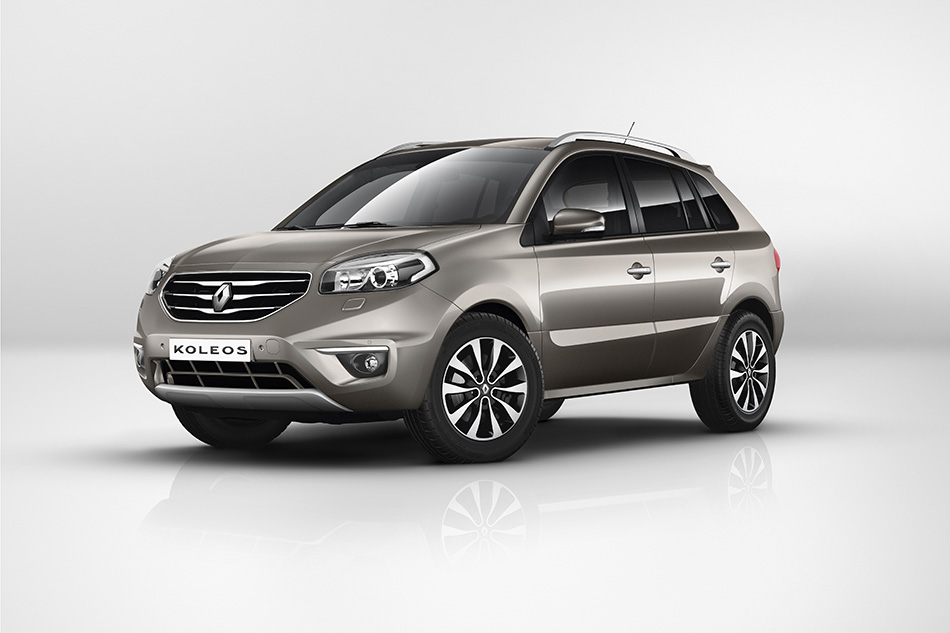 Careful attention has been paid to the quality and finish of the cabin. A selection of new upholsteries and trims have enhanced the original vehicle's elegance and refinement, while the dashboard and instrument lighting have evolved, too, with the introduction of a modern, more stylish speedometer housing and display.

Depending on market, New Renault Koleos can be ordered with the 150hp or 175hp version of the M9R diesel engine, or with the 170hp (TR25) petrol engine. All three deliver dynamic, high-quality performance under the bonnet of this crossover which measures 4.52m in length and 1.85m in width.

Work on the vehicle, engine and gearbox has produced appreciable CO2 emissions savings for the diesel versions of Koleos. The CO2 emissions of the 4x2 version powered by the dCi 150 engine are just 148g/km, which means it is no longer subject to the eco-surtax applicable in France. The emissions of the bigger dCi 175 engine have also been reduced to 166g/km.

The versatility of New Koleos means that it is as much in its element on city streets as it is on twisty country lanes. The Nissan-developed all-wheel drive transmission of the 4x4 version ensures genuine off-road ability, while the model's carefully-honed volumes, precise steering and stability ensure surefooted agile handling in and about town.

Meanwhile, Renault's expertise in the realm of active and passive safety saw the brand's crossover earn a five-star EuroNCAP crash test rating at the time of its launch thanks to features such as ESP, emergency brake assist, programmed structural deformation, six airbags and seat belt pretensioners.

New Renault Koleos boasts segment-leading cabin space and comfort, while the interior layout benefits from the extensive expertise of the MPV's pioneer. Everything has been thought through to make sure that all five occupants feel perfectly at ease, including segment-topping headroom and knee room in the front, and an excellent balance between elbow room and headroom for rear passengers.

Practical and modular. The interior of New Renault Koleos features stowage space of up to 70 litres. Access to the large boot (450dm3 VDA) is facilitated by the split-opening tailgate, the bottom section of which forms a robust bench when lowered. The 60/40-split rear bench seat is equipped with the Easy-Estate system, which means it can be folded in one quick movement to free up a flat floor and boot space of 1,380dm3 VDA. The panoramic opening roof makes the cabin even brighter and more enjoyable.

Use of the audio, navigation and dual-zone climate control systems is perfectly intuitive and their controls fall readily to hand. Meanwhile, careful attention has been paid to eliminating mechanical and road noise which means that occupants are able to fully appreciate the premium Bose® sound audio system which has been tailor-engineered to match the characteristics of the cabin.

Renault Koleos: an international calling and an image-building flagship for the brand

Renault Koleos is marketed in some 40 countries on five continents. It was the first vehicle to benefit from Alliance-wide input since it was designed by Renault, features Nissan technologies and is manufactured at the Renault Samsung Motors plant in Busan, South Korea. Thanks to this fruitful collaboration, it has emerged as a spearhead of the Renault range in several markets.

Renault's first crossover has carved out a place in what is a constantly expanding and fiercely competitive segment: