Twin'Run was developed with the assistance of Tork Engineering / Poclain Vehicules, a French firm specialised in the preparation of chassis for competition. The concept car is a real racing car that has benefited from such competition expertise. The composite material bodywork covers a multi-tube steel chassis powered by a mid-engine engine derived from Mégane Trophy. 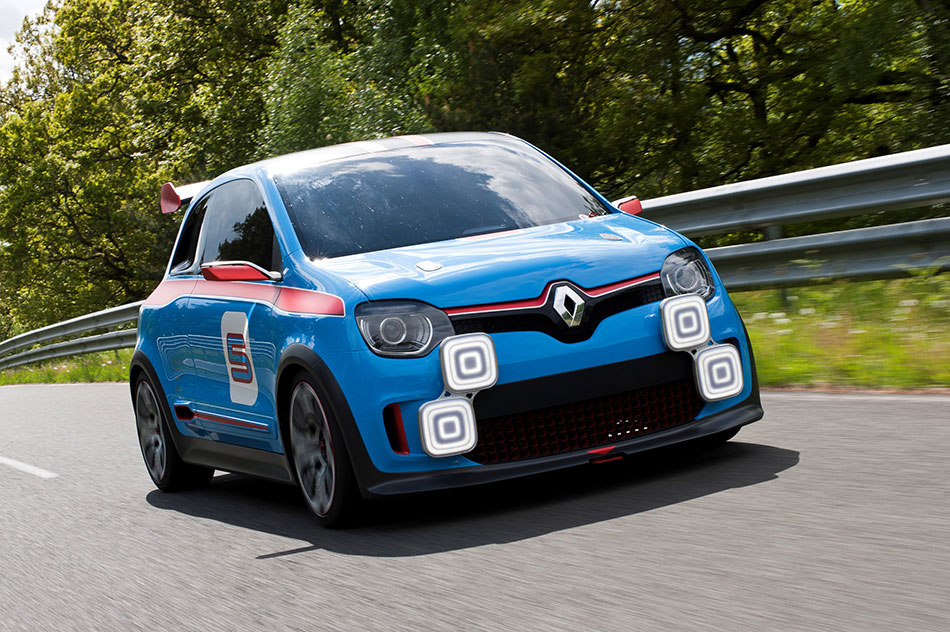 A V6 engine for competition
Twin'Run is fitted with the V4Y engine from the Renault-Nissan Alliance, which is used on the road for Laguna, Espace and Latitude, as well as in competition with the Mégane Trophy racer. Mounted longitudinally ahead of the rear axle centreline, the V6 3,498cc powerplant delivers 320hp at 6,800 rpm and torque of 380Nm at 4,850 rpm. The engine is full-bodied and generous from low revs, delivering linear acceleration and providing excellent traction around bends and in acceleration. Unsurprisingly, it also makes a great noise.

The V6 is mated to a SADEV six-speed sequential gearbox with limited slip differential, enhancing Twin'Run stability and traction in curves. The twin clutch is also borrowed directly from competition.

The air intake vents are positioned at the level of the rear wheel arches. Air extractors in the rear quarter lights help keep the engine cool. The cooling system has received special treatment with polished aluminum pipes set visibly into the cabin floor. The engine is separated from the driving position by a plexiglass panel.

The concept car is well balanced with a 43/57 weight distribution, to ensure it remained so given the mid-engine architecture, various components were positioned under the bonnet, including include the fuel tank, radiator and the hydraulic system.

Composite body
The bodywork in a glass-polyester composite has also benefited from racing expertise. This includes carbonfibre for the front blade, roof, rear vent and wheelarches. Carbon fibre technology combines aesthetics and efficiency, while keeping costs down.

Design intelligence informed by the world of motorsport
The design process was been led by a continuous effort to avoid reinvention with a common sense approach. The chassis has been made of a combination of track-proven elements, allowing to develop quickly a very efficient racing car.

A racing chassis
Twin'Run sits on a multi-tube high-performance steel chassis derived from aeronautics and used in competition. The chassis was developed entirely by Tork Engineering. The ground link is provided by front and rear axles fitted with double-wishbone suspension with independent pivots. The four pivots, in solid aeronautical quality aluminum, deliver high performance on the track. For filtering and body stability, Twin'Run is fitted with OHLINS spring shock absorbers at the front and rear.

The axles have an anti-roll bar with a diameter of 22 mm at the front and 25 mm at the rear. Roll is perfectly controlled for agility and responsiveness.

The aluminum wheel covers feature a special hub with a central bolt that can be dismounted in three parts and fit 18" Michelin tyres.

Jean Ragnotti: an expert view
Rally champion Jean Ragnotti was involved in the final tuning of the chassis system of Twin'Run. He shared his impressions with us while taking a look back at the R5.

"Following this first drive, I'd say that this is a sound car with a strong pedigree. It's easy to control. You can feel straight away that it's a sports car. In terms of balance and ride, it brings the R5 Turbo to mind to some extent.

The gearbox is smooth and you've got powerful brakes. Excellent traction with a responsive engine delivering full power at all revs, rounder and with more torque than the R5 Turbo, making it particularly efficient and easy to drive, unlike the R5, which required more technique.

It's definitely an efficient car with surprisingly good vertical comfort, including in zones of high compression where we're still a long way from the travel stops. All we need to sharpen our attacking edge a bit more are racing tyres. There's a slight roll but no understeer. A gradual performance, no surprises, taking corners easily. This concept car is a worthy heir to the Maxi 5 Turbo."

Note:
Jean Ragnotti is widely recognised as the celebrated rally driver of the R5 Turbo in the 80s. He won three famous World Rally Championship races driving the high-performance Renault: Monte Carlo in 1981, as well as the 1982 and 1985 Tour de Corse races. He still has the opportunity to drive the R5 Turbo and Maxi 5 Turbo for exhibition sessions all over Europe.

A cabin dedicated to performance
Twin'Run has the cabin of a performance car, underlined by the tubular chassis and SPARCO seats fitted with safety harnesses. Nevertheless, the emphasis placed on interior design extends well beyond anything normally seen in the world of motorsports. The door panels and dashboard are upholstered in black and red "alcantara effect" suede. The padded bucket seats, upholstered in three shades of alcantara and carrying the Twin'Run signature, allude to the "French touch" of this one-off concept car. 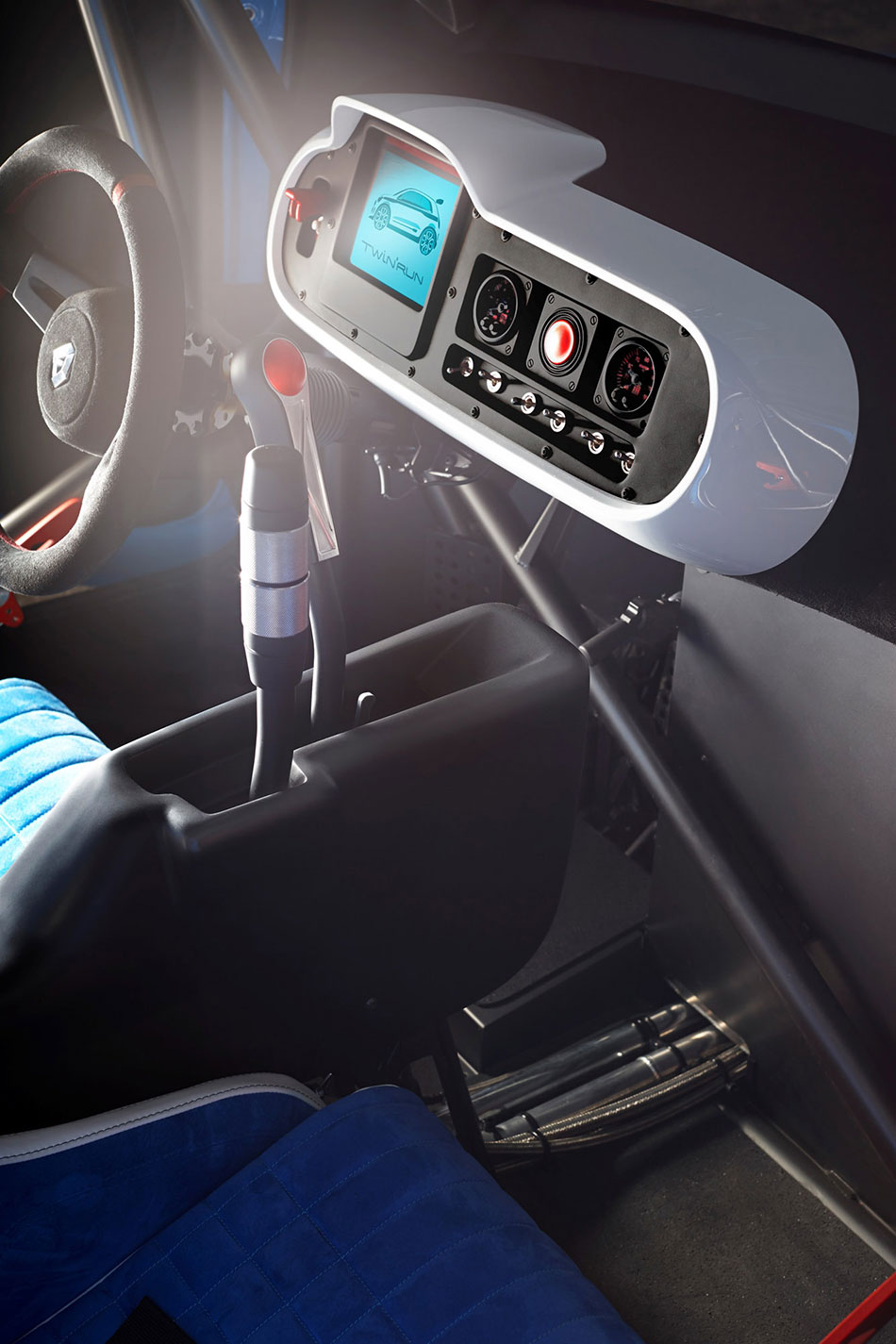 The driver gains a motorsports steering wheel and sequential gear lever with a high-mounted layout for fast gear changes. The joint welded handbrake is positioned on the same level as the gear lever for demonstration figures such as a 360° rotation.

Under the driver's feet, the aluminum pedal assembly is pure motorsport. Designed for easy heel-toe moves, it has been tried and tested on many track vehicles (Lodgy Andros / Duster No Limit).

Positioned in a white lacquer console, the instrument cluster is dedicated first and foremost to driving, as on any sports vehicle. 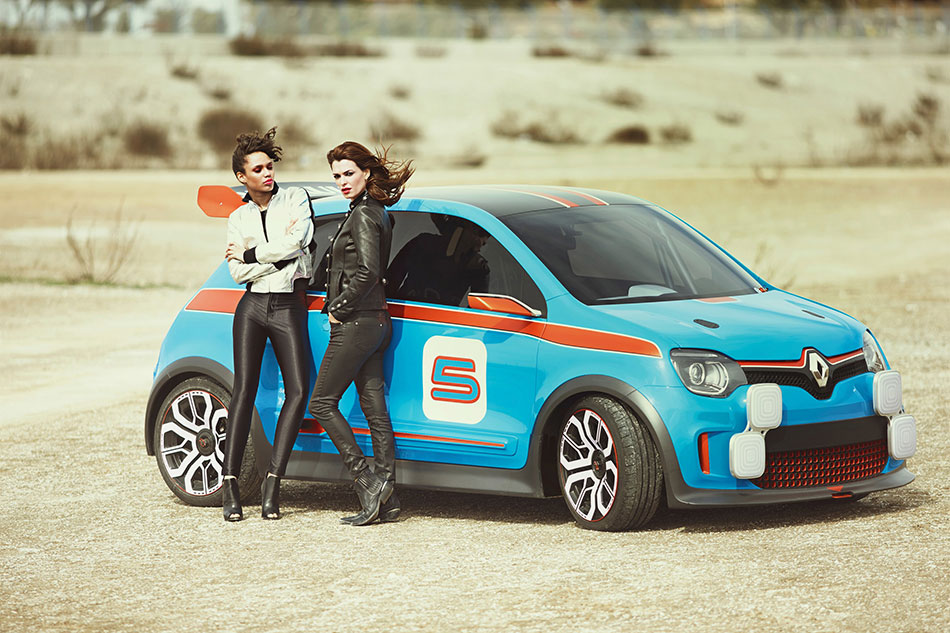