Talking about the refinement and individualisation of the Audi A5 and S5 models, the company Senner Tuning domiciled in Ingelheim on the Rhine has been a well-known primary address in Germany since several years. Now, the team with its finger constantly on the pulse of time centred around Benno Senner is presenting a new version of the company's own interpretation of the 2013 S5 coupe with facelift.

The combination of a new RS look front apron with an RS5 radiator cowing including black emblem and number plate fitting thus endows the "small" S5 with the powerful visage of its big brother. Even more: Carbon elements in flash red constitute absolute highlights in the large air inlets of the front aprons that are very much drawn to the front. Analogously, the housing of the external mirror as well as the filigree side skirts are made of carbon fibre tissues of red shades. The rear spoiler flap and the rear screen cover are however left with the colour of the car. The counterpart of the front apron is in the rear side contained in the rear apron insert in an RS5 look. The number plate is illuminated by bright LEDs. 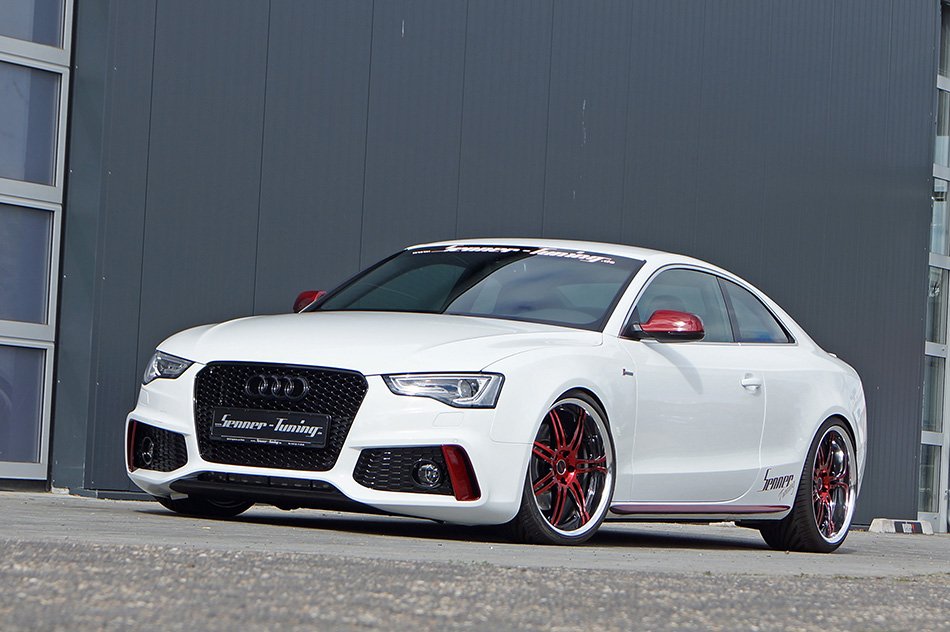 In perfect match with the red carbon, the stars of the two-part welded Work Varianza  T1S alloy wheel rims light up in powerful flash red. Senner Tuning pulled up the popular Vredestein Ultrac Sessanta tyre of the dimensions 245/30R20 and 295/25R20 on the double-spoke rims measuring 9x20 inches (73 mm outer rim) and 10.5x20 inches (95 mm outer rim). A KW coilover kit of variation 3, which also facilitates an individual set-up with its separately adjustable compression and rebound damping systems ensure a perfect fitting of the wheels in the fender.

Senner also took care of the supercharged 3.0 liter TFSI V6. In addition to the two-part carbon cover of the driving mechanism, the installation of an Injen cold air intake including power pipe (Black Edition) is definitely the most striking optical upgrade in the engine compartment. In its interplay with an electronic power booster, the air suction system ensures a peak performance of 328 KW / 446 horse power and a maximum torque of 511 Newton meters. It is self-explanatory that Senner Tuning also deactivates the electronic clog in the course of software optimisation.

A power converter also sharpens the characteristic lines of the electronic gas pedal thus rendering the power of the engine even more directly experienceable. The Senner Tuning S5 controls the entire loudness portfolio thanks to the adapted RS5 exhaust system with valve control that is connected to a flow-optimised downpipe: Its repertoire reaches from the decent piano up until the uninhibited fortissimo. Optionally, there is a remote-control system for the manual opening and shutting of the exhaust flaps or also a high-end version with stagnation pressure-monitored control system, which facilitates individual setting options. The exhaust system is optically rounded up in the black RS5 end pipe covers, which perfectly fit into the openings of the rear apron inserts that were designated for this purpose. 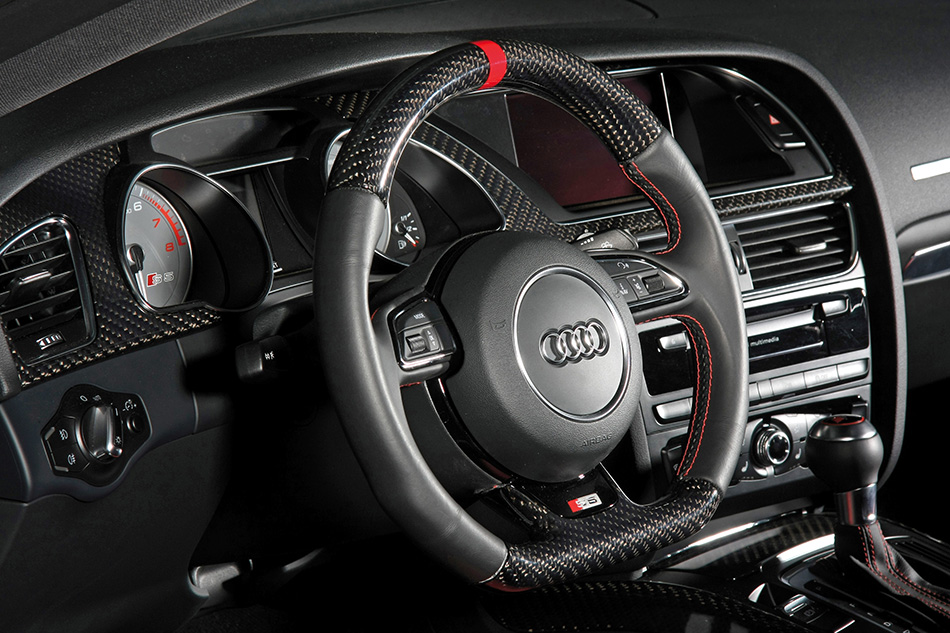 Senner Tuning continues in the interior, the carbon fibre show that has already been started on the exterior: Dark carbon of the 600 series contrasts the red-black bi-coloured Nappa leather fitting and decorates the dashboard, centre console, door lining including RS5 door handles and the sports steering wheel from the super sports car brother R8. There is a stainless steel pedal set in the basement floor including foot rest and soft velour car mats with leather enclosure, colourful seams and "Senner Tuning" inscriptions. The factory-built Audi multimedia system now plays DVD films even while driving thanks to the necessary clearance.

Moreover: The vehicle in the picture here is for sale at a giveaway price! In spite of its absolutely new status and mileage of just 4,850 kilometres, Senner Tuning offers the S5 coupe (first licensed in Jan. 2012, first hand) that was previously sold at EUR 104,850 for just EUR 64,900 gross (EUR 54,537 net, VAT stated separately).