It's 20 years since Toyota RAV4 created a whole new motoring market with the launch of RAV4, the original compact recreational SUV. While other manufacturers have been keen to follow Toyota's lead, RAV4 continues to develop and deliver performance, specification and choice that keep pace with changing customer demand.

That's the inspiration for the 2014 RAV4 which hits the road this week, building on the model's inherent strengths with a new powertrain and even higher equipment specifications. 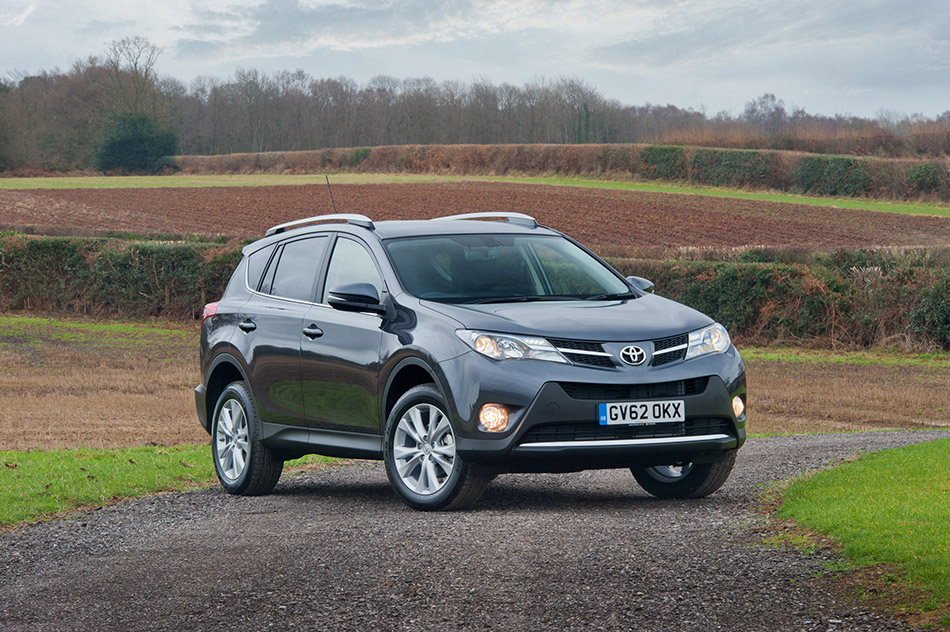 Customers choosing Toyota's efficient 2.0-litre D-4D diesel engine for their RAV4 have, until now, only had the option of two-wheel drive. For 2014 this popular unit has been made available with all-wheel drive, increasing access to 4×4 motoring with the kind of low emissions and strong fuel economy that help keep running costs down.

The new RAV4 2.0 D-4D AWD is available in Icon and Invincible grades. The 122bhp (91kW) engine generates 310Nm for the kind of flexible driving performance that makes the car as easy to manage around town or out on the open road. Coupled to a six-speed manual transmission it returns official combined cycle figures of 137g/km (Band E for Vehicle Excise Duty) and 53.3mpg.

All versions of RAV4 bar the entry level Active model are equipped as standard with the Toyota Touch 2, the latest evolution of Toyota's touchscreen-operated multimedia system.

It comes with a new high-resolution screen that uses four times as many pixels as the original system, for bright, sharp images.

The package includes Bluetooth for hands-free phone calls and sending and receipt of text messages; a rear-view camera; vehicle information, including trip data, climate control profile; and management of settings for door locking and lighting.

It also enables simple connection of iPods and MP3 players via USB or Bluetooth, and, where available, will display album, artist and track information. Audio system options, such as the radio and CD player, can also be controlled using the screen.

Toyota Touch 2 with Go, an option on Icon and Invincible models, adds a wealth of extra functions and advanced connectivity, all controlled simply and clearly using the same touchscreen system.

The leading feature is the full map navigation, with a new screen design that provides clear display of signposts, junctions and lane guidance. A new intuitive detour function uses real-time traffic information to warn of congestion ahead, calculate the likely delay and suggest a suitable alternative route.

The system also provides speed limit indications and safety camera warnings, and in the event of an emergency will give direct access to the emergency services or AA breakdown assistance, automatically providing exact vehicle location details on the display screen.

The improved package further provides connection to a range of features, including Toyota real-time HD traffic data from TomTom.

Toyota's system  is the first and currently the only one of its kind  to feature  Google Street View™ and Panoramio™, providing on-screen imagery of the vehicle's location or a chosen location to help pinpoint and recognise destinations; and a range of other multimedia applications such as social media channels, parking information and filling station locations.

A range of applications are available free for 12 months with Toyota Touch 2 with Go, easily obtained following a quick registration process via Toyota's customer web portal.

Both Icon and Invincible versions of the 2014 RAV4 benefit from a few extra equipment and styling features.

Where Invincible grade models are concerned, customers can now choose between black or a new beige leather seat upholstery. All round protection has been made standard, thanks to front parking sensors being provided in addition to those at the rear.

Toyota has also made the 10-spoke 18-inch alloy wheel design standard for the 2WD model.

Established features of the Invincible grade include heated front seats, power slide and lumbar adjustment for the driver's seat and roof rails.

As a result of the new, larger wheels, the CO2 figure for the 2.0-litre D-4D two-wheel drive models increases fractionally, but with no impact on the VED rating.

All RAV4 models are equipped as standard with a space saver spare wheel. The palette of nine exterior paint finishes includes a new metallic finish for 2014, Mahogany.

A wealth of options is available for RAV4 owners who want to add something extra to their vehicle. New features for 2014 include a Blind Spot Monitor with Rear Cross Traffic Alert. This uses a radar system to detect vehicles moving alongside in the driver's blind spot, or approaching from either side when reversing, for example out of a car parking space. When the system detects such a hazard, a warning light flashes in the appropriate door mirror.

Icon and Invincible models can be upgraded with a Style Pack (front guard and underguard, side and rear chrome trim and scuff plates);  a Protection Pack (front and rear parking sensors, rear bumper protection plate) is additionally available for Icon grade. Extra in-car entertainment choices include powered docks for holding tablets and DVD players and a sunroof can also be specified (Icon and Invincible).

The 2014 RAV4 is on sale now, with first customer deliveries this week. Toyota has made the range even more accessible by reducing the entry price point by £400, offering the 2.0-litre D-4D 2WD Active model for £22,195 on-the-road.

Full details of prices, VED bands and insurance are provided below.