The new Volvo C70 started its life as a coupe. Then the design team, headed by Fedde Talsma took the roof away. One car became two. "Both cars" are, however, among the leaders in safety and styling and fun to drive.

A convertible is usually designed as an open car. A roof is then crafted on to it, with a result that is not always pleasing to the eye. At Volvo Cars, the design team did exactly the opposite when working on the new C70. They created a sporty coupe and then converted it into an attractive convertible. Because the secret is to make the car look at its best irrespective of whether the top is up or down. The first generation Volvo C70 convertible was originally launched in 1997 and featured a design that was very appealing at the time, a design that has stood up well against time. It was discontinued in March 2005 after nearly 50,000 cars had been sold worldwide. In fact, the last year of production was also the best year sales-wise, with 8,000 units, which clearly proves the point of a well executed design.

Another lesson that was learned from the first generation of convertibles was that for a newcomer in the segment like Volvo is, it takes at least one generation of cars to really get yourself established in the premium convertible segment.
The reasons for retaining the "C70 Convertible" designation for the new car were that:

A strong profile with an innovative interior

The new C70 convertible is shorter and lower than its predecessor but retains the same width. This in combination with the relatively short front overhang gives the car a powerful stance. A fact that becomes very apparent when the car is viewed from the side.

This is also enhanced by the shoulder line which is drawn up towards the rear of the car and which not only gives an impression of dynamism, but also reinforces the feeling of a protective band that runs behind the rear seat passengers. In true Volvo fashion, all four corners of the car are rounded, further enhancing the "human touch".

The interior of the new C70 is marked by Volvo's modern, innovative design features, inspired by Scandinavian tradition with clean surfaces, genuine materials and good functionality. Inspiration has been drawn more from Scandinavian product design than pure car design.

The super-thin, visually floating centre ‘stack', known from the Volvo S40, is also featured in the new Volvo C70 and its panel can now be varied according to the customer's wishes with three different appearances. 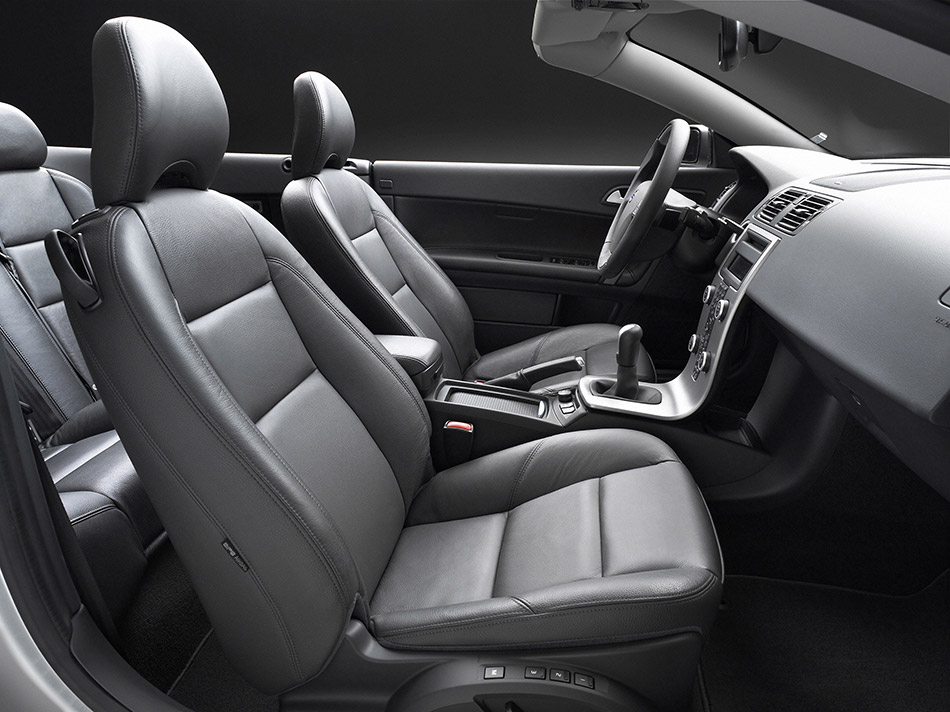 A special optional upholstery has also been developed for the new Volvo C70. Vulcaflex is a synthetic material with an exciting surface structure and a high-tech feeling. Vulcaflex is used both in combination with textile and with soft leather.

The new generation of Volvo C70 convertibles has a retractable steel hardtop rather than a soft hood. The reasons for choosing a steel roof were:

Designing and developing a three-piece retractable hardtop, a small mechanical wonder in itself, is no easy task. A durable and reliable technical design with a maximum operation limit of 30 seconds and a perfect fit in place both when up or down had to be matched together into a perfect solution. All features that are taken for granted by the customer who rightly expects comfort and effortless operation.

After a thorough investigation of industry expertise, this complicated work was entrusted to Italian master coachbuilder Pininfarina. Not only did Pininfarina develop a roof mechanism that is a technical masterpiece, the company will also be responsible for the production of the car in the jointly-owned – Pininfarina with 60 percent and Volvo Cars with 40 percent – Pininfarina Sverige AB plant in Uddevalla, Sweden.

After some nine years spent on becoming an established player in the premium segment for open cars and having built up a considerable body of knowledge and consolidating Volvo Cars' credibility even further, the expectations are to double sales compared with the first generation's best year.

The annual sales target for the new Volvo C70 is estimated at some 16,000 cars. The US market will account for about half the volume with the UK and Germany sharing some 30 percent between them. The remaining 20 percent will be distributed between a number of other markets.

According to Volvo Cars' research and statistics, every second C70 convertible will be owned by a woman.