Enter the new Fiat 500, the manifesto of the 'new Fiat', a model that represents to all intents and purposes the materialisation of a new approach, of new brand strategies, and a different approach to the car. Exactly 50 years after the launch of the first edition of the model, which was to become an icon of Italian motoring and of an entire period of history, Fiat is accelerating into the future.

Anyone could re-edit the Fiat 500, because its shape is part of our collective memory. Some industrial objects that were the fruit of Italian creativeness in the period after the war, like the Fiat 500 or the Vespa, cannot be judged purely in aesthetic terms, nor do they represent just a good engineering exercise in which form serves a function. On the contrary, they are powerful catalysts, revolutionary in their design and in the concept that defines common reference points and benchmarks. When this happens, the result is a masterpiece that is an essential part of industrial history. The Fiat 500 is one of them. 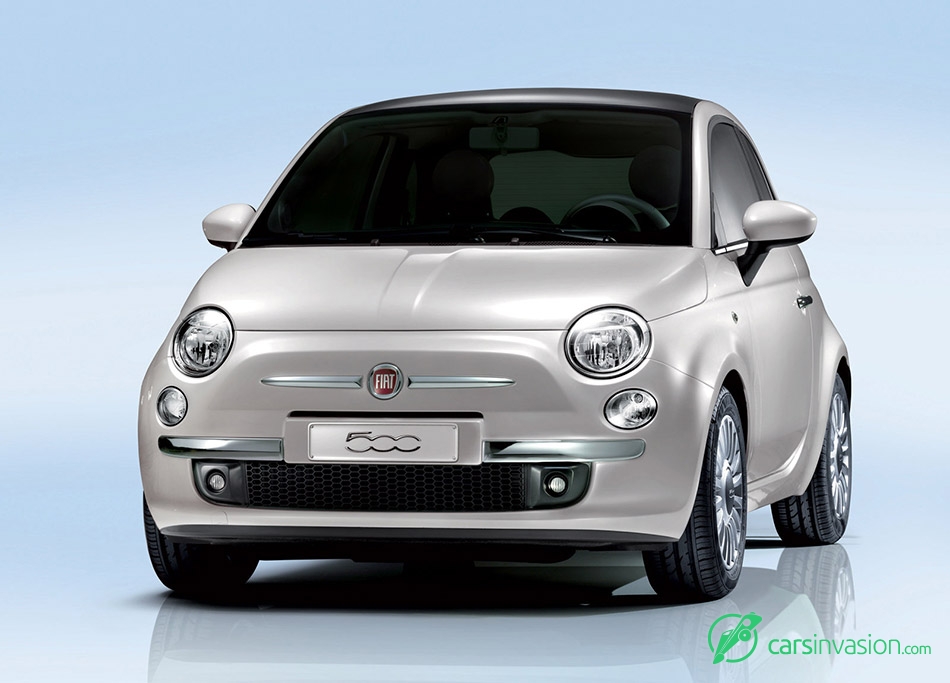 This is a story that has taken place twice. The first is the story of a very large number of owners, fans and enthusiasts who promoted the car's image as a good, reliable and economical vehicle, which became an expression of a part of their lives, the best part, evoking a carefree spirit and a lack of worries. The Fiat 500 is linked to these memories, to strong friendships and first loves, it evokes images of a positive past which many would like to revive.

Dante Giacosa's Fiat 500 was launched on July 4, 1957, as a cycle of rebirth was closing after the devastation of war, and a period of radical renewal of the company's product range was also coming to an end, opening the way for a cycle of successes in the coming decade, a period that we can consider one of the brightest in the brand's one hundred year history. The parallel with the new Fiat 500 is clear; it concludes the cycle of extraordinary rebirth of recent years, but thanks to its stylistic and technological features, it also represents the spark of a lasting process of expansion. And this is where history starts again.

It would be belittling to 'limit' the phenomenon of the new Fiat 500 to a simple, nostalgic reinterpretation. Fiat's goal has not been to design a car that 'looks like' a 500, but one that 'could be' the Fiat 500 again. The new Fiat 500 opens the way for an innovative process in a number of environments that are very significant for today's customers, clearly outlining where its ambitions lie in relation to the future positioning of the Fiat brand. The Fiat 500 respects the original concept in its shape and function, as you expect in these cases, so that it can evoke all the emotions and memories that make all 'icons' eternal, raising them beyond the limiting dimension of their category.

But first and foremost it is important to underline the innovations that the new model is able to bring to this class of product for the first time.

First of all, the widespread involvement in the development of the model and of the marketing plan, with the participation of over 3,000,000 enthusiasts who have submitted their ideas to the project, through the www.500wantsyou.com website. This initiative is a new cultural approach to relations between manufacturer and client, making Fiat one of the most open organisations, close to the expectations of the public. 'The 500, the car of the people, by the people': this slogan sums up the philosophy behind the development of a project which, in the best Fiat tradition, 'democratises' access to contents and technologies that have never been offered in this segment before. 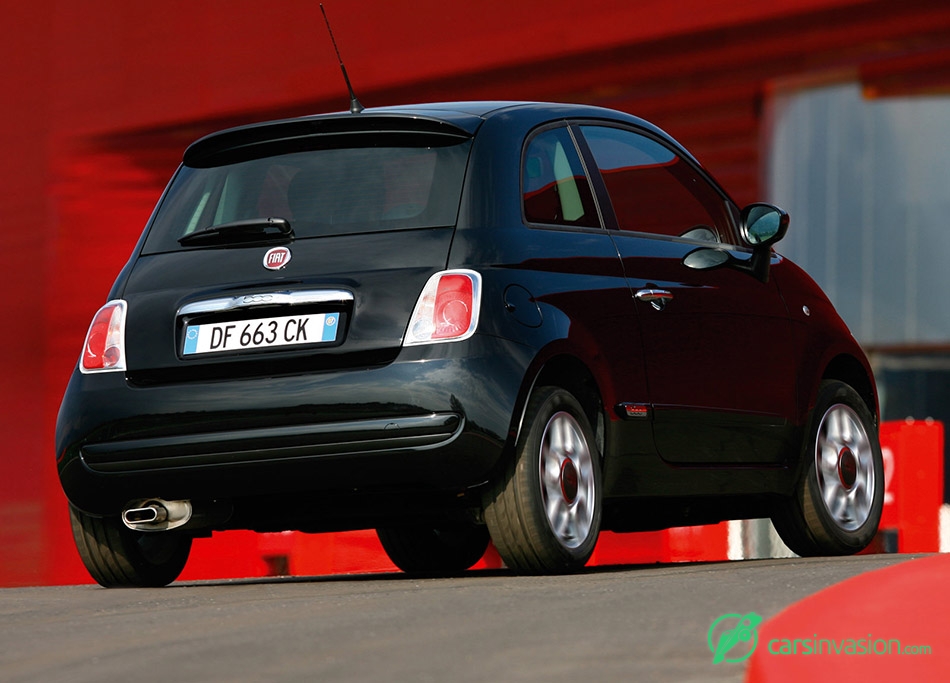 It is the first time that a car has been launched with the full range of engines (69 bhp 1.2. 75 bhp 1.3 Multijet with DPF and 100 bhp 1.4 16v) ready to meet the emissions limits set by Euro 5 standards, more than two years before the legislative deadline, a tangible sign of Fiat's determination to reaffirm its leadership where the environment is concerned.

It is also the first time that a compact car (3.55 metres) has been built to achieve a 5-star rating in the EuroNCAP impact tests, and it is ready for the 6-star test if and when the new rating is introduced.

Safety at all costs, with no impact on prices, a bold decision, which confirms Fiat's intention of extending its strategy of leadership to vehicle protection, totally consistent with decisions taken in recent years as regards the Panda and the Croma, right through to the Grande Punto and the Bravo.

It is a safe product, not only for its structural sturdiness, but also because of the choices made in the construction of the range of outfits and services: 7 airbags as standard equipment (it is the only compact to offer a kneebag), and an advanced ESP available with all engines (standard on the 100 bhp 1.4 16v), are absolute novelties in this segment.

It is the first 'small' car to offer so much in the way of content: 4 specification levels, 3 engines at the launch, 12 colours, including 6 vintage colours that will bring the 1950s and 1960s to mind, plus tri-coat white produced by a process that is usually only adopted on luxury cars, 15 types of upholstery including luxurious Cordura and Frau Leather, 9 types of wheel rims, and 19 types of stickers, making a total of more than 500,000 variants (549,936 to be precise); the most interesting include the electric fragrance diffuser, with a choice of 3 different fragrances, and coloured key cases, an approach similar to that in the mobile phone market that lets you match the colour of the key to that of the bodywork, or to select another pattern of your own choosing. There has never been such a lavish array of accessories on such an accessible car.

The Fiat 500 is an inclusive not an exclusive concept and Fiat felt that this was the best way to meet the tastes of all its potential customers, without distinction, from the most minimalist to the most eccentric. The idea of creating a product that could adapt to the needs of the individual was also expressed in the decision to surpass all the competition in the process of incorporating electronic technologies into the passenger compartment (Plug In). A second generation Blue&Me is available, and an iPod can be easily incorporated thanks to the socket and the battery charger. A new portable navigator was developed specially for the Fiat 500 with Magneti Marelli, which is fitted directly on the dashboard and connects to other vehicle functions. 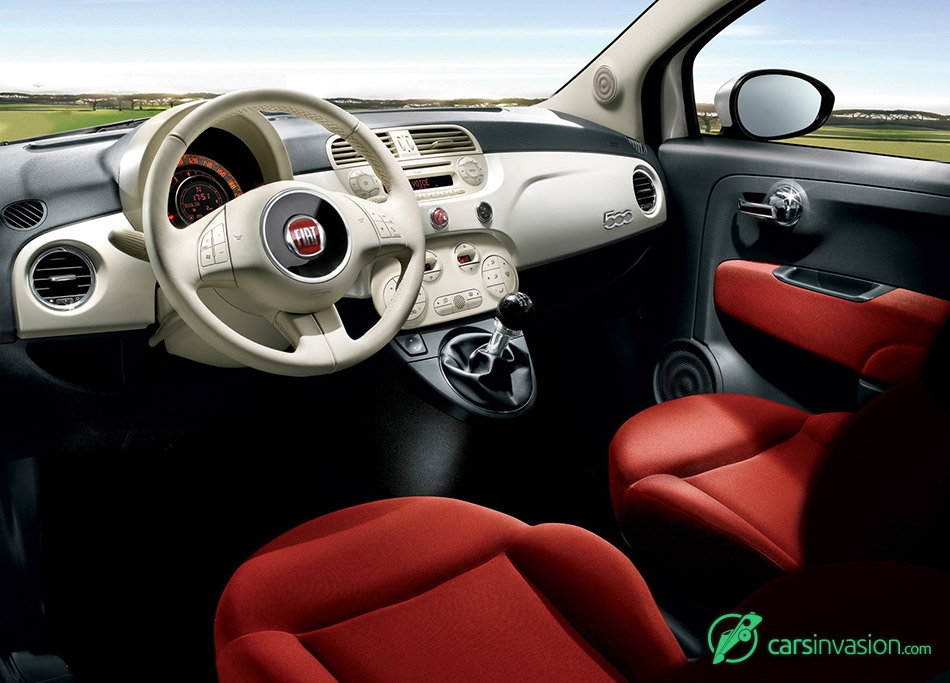 The concept of customisation is not limited to the product, but extends to the world of services and forms of payment. For example, with the '500 Cents' and '50to500' formulas from Fiat Group Automobiles Financial Services, the customer will be able to purchase any version of the Fiat 500 including customisation, for 5 a day, and with no down payment, or to pay 50% of the sum immediately and the remainder after 2 years.

And every time that a customer takes out one of the above loans he will benefit from a 5 year/500,000 km manufacturer's warranty and other services that Fiat is offering for the first time, and which envisage complete 24-hour roadside service. And when it is time for periodical maintenance, the car will be picked up from the customer's home, and his mobility will be guaranteed by the reimbursement of any taxi fares.

For the company, the birth of the Fiat 500 represents the start of a new chapter, a declaration of the role that Fiat aims to interpret in the future on the market and in society. The stimulus to a new model of conscious consumption. A model for the exploitation of experience in the automotive field that focuses on quality and emotions, on uniqueness rather than on mass-production, where simplification does not mean doing without. The Fiat 500 is the tangible synthesis of these aspirations.