Fans of the Ford Flex have even more to love this year with an upgraded model with a sleek new look and even more technology to make driving safer, easier and more fuel-efficient.

"Flex appeals to people who want to stand out from the crowd, and it has the highest retention rate of any vehicle in the Ford lineup," said Mark Fields, Ford president of The Americas. "With technologies not found in other full-size utilities, even better fuel economy and a more modern, sophisticated look, the new model offers people even more reasons to choose Flex."

Upgraded connectivity
The new Flex features SYNC® with the new generation of MyFord Touch®, and is the first vehicle in the Ford lineup to have SYNCstandard.

"We've listened to our customers and improved what they love about MyFord Touch," said Kenneth Williams, systems integration engineer. "In this upgrade, the screens have a cleaner, clearer display. The words on the screens are larger and easier to read, the pressable areas on the screen look more like buttons, and we have made the functions clearer for faster navigation."

Enhanced safety and driver aid technology
The new Flex is available with the automotive world's first production rear inflatable belts to offer improved comfort and protection for rear seat passengers. The advanced restraint system is designed to help reduce head, neck and chest injuries for rear seat passengers, often children and older passengers who can be more vulnerable to such injuries.

Advances in airbag inflation and safety belt construction methods have enabled Ford and its suppliers to develop inflatable seat belts that are designed to deploy over a vehicle occupant's torso and shoulder in 40 milliseconds in the event of a crash. 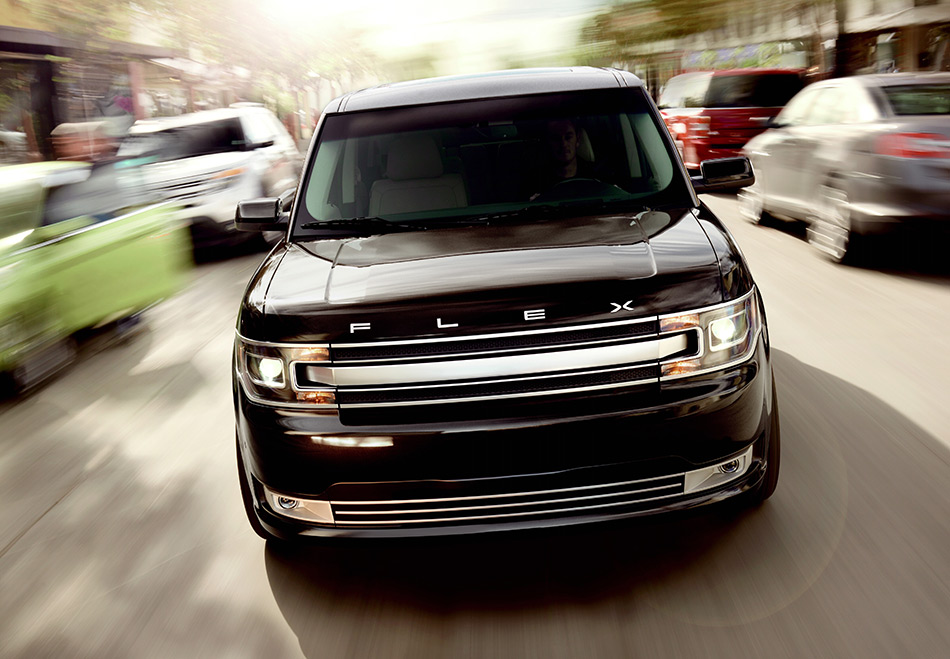 Flex comes equipped with Torque Vectoring Control and Curve Control technology. More typically found on high-performance cars, the Torque Vectoring Control system uses the car's brakes to imitate the effect of a limited-slip differential, constantly balancing the distribution of engine torque between the front wheels during cornering, resulting in improved grip and steering and a reduced chance of understeer.

The system operates using the car's stability control module and monitors the vehicle 100 times per second. As the car accelerates through a corner, the system detects when the front inside wheel is starting to slip and applies an imperceptible amount of braking to the wheel. This prevents wheel spin and has the effect of transferring engine torque to the outside wheel, which has more grip, thus maintaining traction and steering control.

Unlike a traction control system that reduces engine power, the intervention from Torque Vectoring Control is extremely subtle and may not even be noticed by the driver.

Curve Control senses when a vehicle is entering a curve too quickly, and can apply four-wheel smart braking to reduce vehicle speed by up to 10 mph in approximately one second and help drivers follow their intended path. Curve Control is effective on dry or wet pavement, and is expected to be particularly useful when drivers are entering or exiting freeway on- or off-ramps with too much speed. When a vehicle enters a curve too fast, the system responds to the driver's steering input by rapidly reducing torque and increasing brake pressure to help keep the vehicle under control.

Fuel economy bolstered by engines, technologies
Under the hood, Flex's new base engine delivers even more efficiency and performance with the addition of twin independent variable camshaft timing (Ti-VCT) to the 3.5-liter V6.

The popular 3.5-liter EcoBoost® V6 remains on the new Flex, bringing the fuel economy of a V6 engine with all-wheel-drive capability and V8-like performance of 365 horsepower and 350 lb.-ft. of torque.

Both engines are mated to a six-speed SelectShift Automatic™ transmission.

Both engines also are made more efficient with EPAS (electric power-assisted steering). EPAS improves fuel economy approximately 4 percent, and reduces emissions while improving steering performance primarily because the steering system is powered by an electric motor connected to the vehicle's battery, instead of an engine-mounted hydraulic pump steering system.

Flex also gets multiple actions to make it even quieter in terms of road, wind and powertrain noise. The front shock towers are wrapped with sound absorbers, upgraded dash insulator and pass-throughs, the hood insulator is made thicker and absorbs more sound, while the rear wheel liners get an acoustic absorber added.

Fresh new look, touches – inside and out
Flex's new front end is now slightly rounded, creating more visual harmony between the front and the rest of the vehicle. The signature Ford blue oval has been removed from the front, which now solely bears the Flex badge. There are also six all-new wheel styles, including three all-new 20-inch selections.

In the rear, Flex now has standard dual exhaust and an available new appliqué with new integrated rear view camera.

Class-exclusives include the available second-row refrigerated console and the latest generation of MyFord Touch with SYNC. 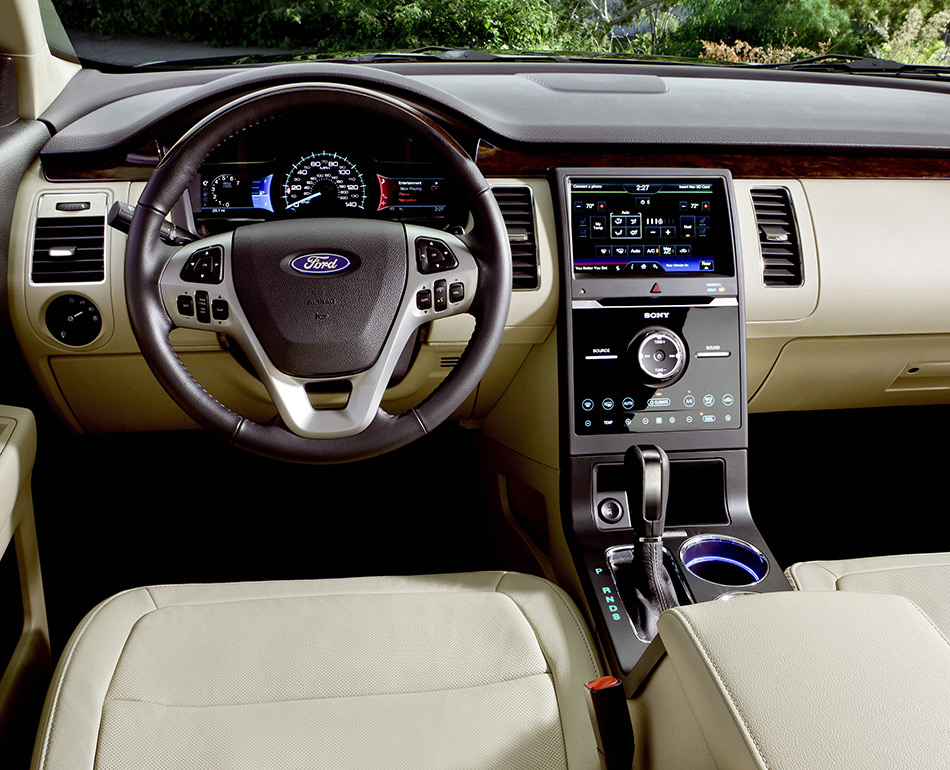