The all-new 2012 Honda Civic represents the ninth generation of one of the company's most popular and globally recognized products. Having earned a reputation for being a fun-to-drive compact that is simultaneously fuel efficient, sporty, stylish and durable, the Honda Civic has become a beloved and relied-upon member of the worldwide transportation family. Cumulatively, the Civic has reached 8.8 million customers in the United States through 2010 since its launch as a 1973 model.

Each generation of Honda Civic has improved with a specific development theme in mind. The 2012 Civic embraces the fundamental concept of a "futuristic and distinctive compact," a direction that introduces new values that reach ahead of present-day needs and elevates the experience that Honda Civic represents. Major strides include improvements to refinement throughout, increased fuel economy on all models, the further addition of interactive technologies for personalization and convenience, along with enhancements to performance, ride and interior packaging.

Civic customers span the entire public spectrum of automotive drivers. They are high school graduates and college students just beginning their adult lives; they are families with young children; they are schoolteachers, soccer parents and professionals, environmentalists and performance enthusiasts; and they are Generation Y, baby boomers and retirees. And they live in Snow Belt states, Sunbelt states, in the Midwest and in Hawaii and Alaska. But regardless of their demographic and psychographic makeup, Honda Civic customers are tied together by one thing - they are young at heart. Because at the end of the day, beyond its myriad attributes (including safety, economy, durability, comfort and style), the Civic is fun to drive. 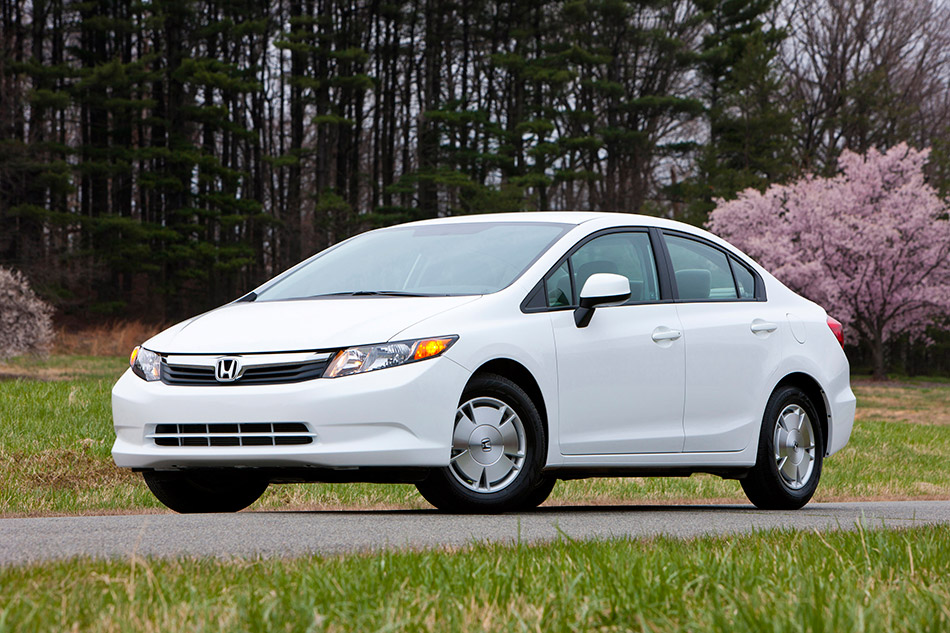 Honda has long been known for its world-class engine technology and a continuous process of innovation and improvement. At the core of Honda's powertrain engineering is the ongoing pursuit of greater performance, enhanced fuel economy and low emissions. The 2012 Civic model range embodies Honda's ongoing effort to offer a wide range of powertrain choices including gasoline, hybrid and Compressed Natural Gas (CNG) that offer unique solutions for different buyers.

An advanced 140-horsepower, 1.8-liter i-VTEC® engine is standard in the Civic Sedan, Civic Coupe and Civic HF, with a choice of a 5-speed manual or 5-speed automatic transmission (automatic only for Civic EX-L Coupe, Civic EX and EX-L Sedans, and Civic HF). A variant of the same 1.8-liter engine develops 110 horsepower in the compressed natural gas (CNG) powered Honda Civic Natural Gas, which comes standard with a 5-speed automatic transmission. The performance-oriented Si model has a 201-horsepower, 2.4-liter i-VTEC® engine, matched with a close-ratio 6-speed manual transmission. And finally, the Civic Hybrid is powered by an ultra-efficient 1.5-liter i-VTEC® engine with Integrated Motor Assist® producing 110-horsepower. This is coupled to a Continuously Variable Transmission (CVT).

The Honda Civic Sedan, Civic Coupe, Civic HF and Civic Natural Gas benefit from an updated and refined version of the 1.8-liter I-4 engine that powered the previous generation Civic. The new engine has extensive changes that reduce friction, improve emissions performance and increase fuel economy.

The engine is a Single Overhead Cam (SOHC) 1.8-liter inline 4-cylinder design with 16 valves, i-VTEC®, and a dual-stage intake manifold. In the Civic Sedan, Civic Coupe and Civic HF, the engine produces 140 horsepower at 6300 rpm, and 128 lb-ft. of torque at 4300 rpm. In the Civic Sedan and Coupe, the 1.8-liter engine has an estimated EPA city/highway fuel economy rating of 28/39 miles per gallon when equipped with automatic transmission.

The 2012 Civic Si is powered by a new 2.4-liter inline 4-cylinder engine that is the largest and most powerful of any Civic introduced in the United States. The dual overhead cam (DOHC) engine is an all-aluminum design that uses four valves per cylinder (16 valves total), a high-performance version of the i-VTEC® system and a specially tuned high-volume intake manifold. The Civic Si produces 201 horsepower - up four horsepower from the 2.0-liter engine it replaces. The i-VTEC® "intelligent" valve-control system, new friction-reducing technologies and extensive weight control measures helps the Civic Si deliver exhilarating acceleration, improved fuel economy and low exhaust emissions.

The Honda Civic Si is available exclusively with a 6-speed manual transmission with a short-throw shifter. Designed to be compact and lightweight, the 6-speed has also been engineered to provide quick and precise shift action. The Civic Si also includes a clutch with a torsion mechanism that enhances refinement in terms of engagement and feel.

Together, the gasoline engine and electric motor team to produce 110 horsepower at 5500 rpm and 127 lb-ft of torque at 1000-3500 rpm. Compared to the previous generation Civic Hybrid, the new Civic Hybrid has the same peak horsepower, but achieves it at 500 fewer rpm. The new Hybrid has gained 4 lb-ft of torque, and it is spread over a wider rpm range (between 1000 rpm to 3500 rpm) for improved performance during normal city driving.

The new 2012 Honda Civic Sedan and Civic Coupe are the most aerodynamically and aggressively styled models in the model's history - and also the most functional and versatile in how most Civic customers like to use their cars. As in past years, both 5-passenger sedan and 5-passenger coupe body styles are available. The sedan design is sophisticated and efficient, while the coupe is more dramatic and exciting. Both are highly aerodynamic, including a sleek windshield angle with narrow A-pillars (and thinner C-pillars in the Coupe) for excellent outward visibility, numerous under-vehicle aerodynamic aids, and even low rolling-resistance tires on all models except Civic Si.