The SL 55 AMG and SL 65 AMG have now been made even sportier and more exclusive than ever. Both of these exceptional roadsters from Mercedes-AMG have made further substantial advances in terms of technology, design and appointments and now offer even greater driving pleasure. A reengineered AMG sports suspension based on second-generation Active Body Control, more direct steering and new AMG high-performance brakes endow both the two-seaters with impressive handling skills. The looks of the body and interior have been updated too by exercising meticulous attention to detail.

The improved AMG 5.5-litre V8 supercharged engine at the heart of the SL 55 AMG is equipped with a new, higher-speed supercharger compressor and a larger throttle valve to optimise the fresh-air supply. These modifications plus the installation of an even more efficient engine management unit have boosted the output of the AMG V8 powerplant from 368 kW/500 hp to 380 kW/517 hp, while the peak torque has been increased from 700 to 720 Nm. The new SL 55 AMG accelerates from 0 to 100 km/h in 4.5 seconds (outgoing model: 4.7 seconds) and goes on to reach an electronically limited top speed of 250 km/h. 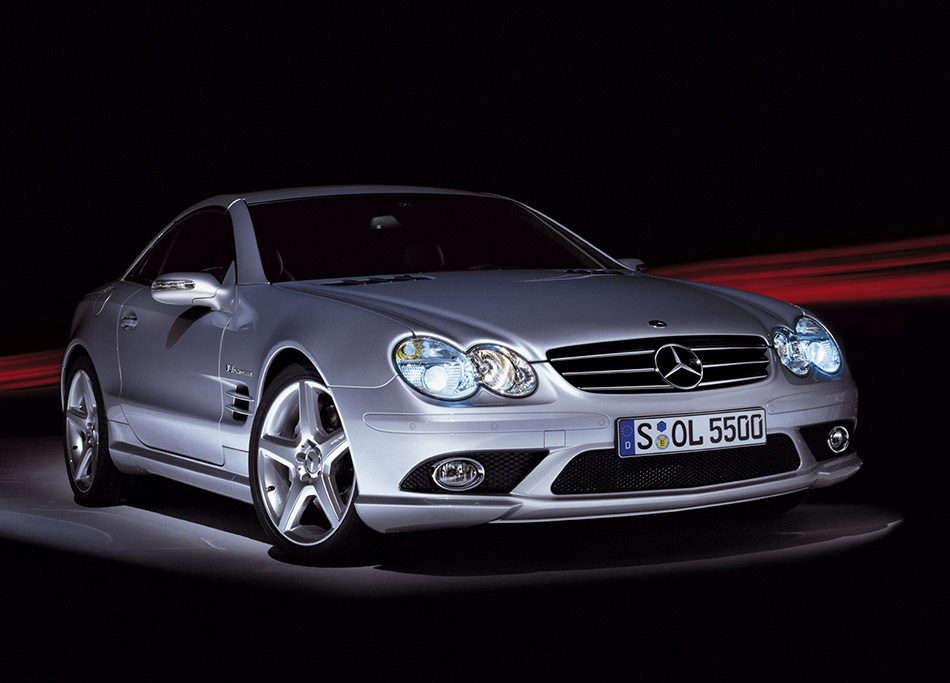 The driving force behind the SL 65 AMG is the AMG 6.0-litre V12 biturbo engine developing 450 kW/612 hp and a maximum torque of 1000 Nm, making this still the most powerful production roadster in the world. Impressive evidence of the phenomenal power harnessed by the AMG twelve-cylinder unit is provided by the 0-100 km/h acceleration time of just 4.2 seconds. Again, the top speed is electronically limited to 250 km/h.

The outstanding calibre of the two AMG powerplants has earned them top honours at the "International Engine of the Year Awards": the supercharged V8 engine was crowned "Best Performance Engine" in 2003 then, one year later, the same award went to the V12 biturbo engine.

The AMG sports suspension based on second-generation Active Body Control has been further refined for the AMG Roadsters. The specific measures that have been implemented reduce body movements in dynamic driving situations to levels even lower than those achieved by the outgoing models, without impairing the excellent ride comfort in any way. Greater agility comes courtesy of the revised elastokinematics at the front axle and the speed-sensitive power steering with a more direct ratio and new valve control logic.

Both the SL 55 AMG and the SL 65 AMG are equipped with newly developed AMG high-performance brake systems which ensure optimum metering of braking power, extremely short stopping distances and outstanding resistance to fading. The front axle on both models boasts large composite brake discs with six-piston aluminium fixed callipers. The SL 65 AMG comes equipped with disc brakes that are 30 mm larger both front and rear and ultra-high-performance composite brakes at the rear as well as at the front. Plus, the top-of-the-range AMG V12 model is fitted with a multiple-disc limited-slip differential with a locking factor of up to 40 percent for optimum traction.

Not to be outdone, the interior of both AMG Roadsters also sports an even more dynamic and high-class look. New genuine carbon-fibre trim elements inject a sense of sportiness and reflect AMG's successful involvement in the world of motorsport. The AMG ergonomic sports steering wheel with its specially moulded rim is now fitted with silver-coloured aluminium AMG shift paddles. Further new features include the AMG main menu in the instrument cluster, which displays the currently engaged gear and recommended upshifts, plus either the engine oil temperature or the battery voltage as well as the RACETIMER. The new RACETIMER function allows the driver to record lap times on private racing circuits, storing not only the time for the fastest lap but also the average and top speeds as well as the lap length.

Optimised quality feel and superior ease of use

The package of facelift measures for both AMG Roadsters includes high-quality metal door sill panels with AMG lettering, a new-look instrument cluster shroud trimmed in nappa leather with double topstitching above the classic chronometer-design round dials, a new digital clock plus ventilation outlet cover and a new aluminium-look switch for operating the vario-roof. It takes just 16 seconds to open or close the folding hard-top, a glass version of which can be specified as an optional extra. The AMG sports seats, interior door panels and armrests are upholstered in fine nappa leather. Even greater ease of use is available by opting for the electric remote boot lid closing feature which enables the boot to be both opened and closed with the minimum of effort. Standard equipment includes a removable luggage cover which increases the boot capacity by 22 litres to 339 litres – more than any other competitor in this segment. The luggage cover can be removed in a few simple steps, a feature which frees up extra boot space as well as making loading easier and boosting the boot's utility value. The SL 55 AMG and SL 65 AMG will be appearing at Mercedes-Benz sales and service outlets and authorised dealerships from March 2006 to celebrate their market launch.